Boomers: Dancing together forges bonds of fitness and friendship 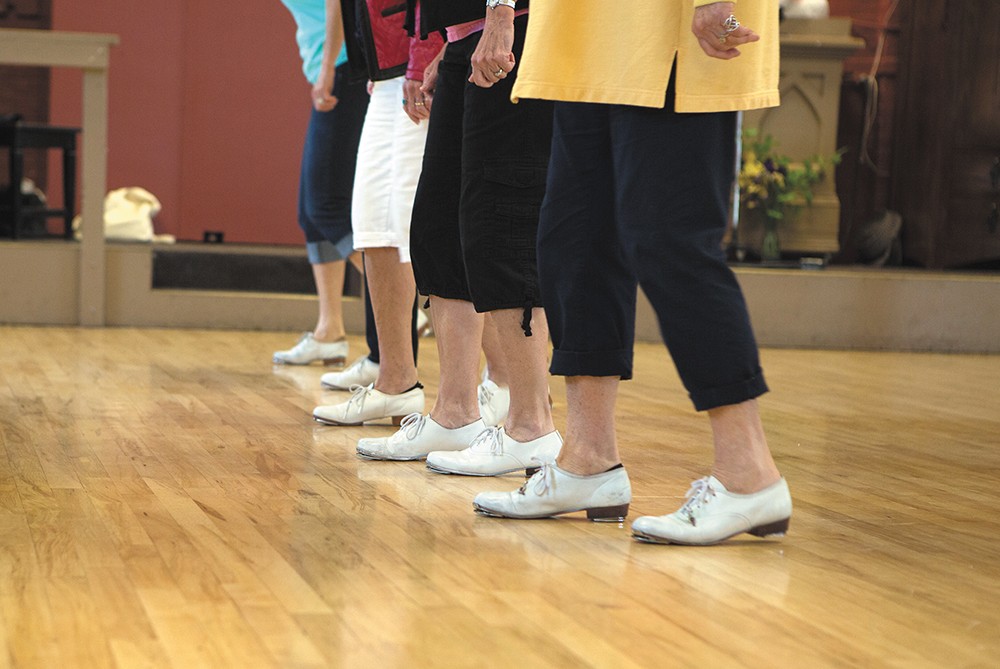 Mark Twain once said, "Age is an issue of mind over matter.

If you don't mind, it doesn't matter." But does it? While we worry our later years might include health woes or physical limitations, the Spring Chicks hold a different view, one that Mark Twain would no doubt approve of. According to these ladies, the term "senior citizen" offers its bearer a life of laughter, friends... and dancing.

The women met through their involvement in the Tap Grandmas, a large dance group that performs in the Spokane area. One participant, Jan Preston, felt an hour of tapping was insufficient and began staying after practice to clog. She caught the attention of several group members who asked her to teach them the unfamiliar folk dance. In a short time, the informal gatherings gained enough momentum to create a new troupe: the Spring Chicks.

The ladies practice together four days a week. In a group that feels more like a bunch of sisters, they neither tire of the exercise nor the company. "It's a sisterhood of cloggers!" says Joyce Sleeth.

When asked about the toll that rehearsing takes on their bodies, each is quick to defend their activity. "I think if I quit dance I'd probably gain 30 pounds in less than a year," says Kim Turner. She receives hearty agreement from her partners in crime, including Marion Martinolich: "If I didn't dance, I'd be crippled. It's very medicinal."

But the group hasn't been without injuries. Merry Dick broke three bones in a dance-related fall, and Turner underwent foot surgery. Several group members experienced other health issues that temporarily benched their participation. John Celestino, lead physical therapist at Valley Hospital and Medical Center, offers his perspective: "Dancing has its drawbacks in certain people afflicted by joint, cardiac or respiratory conditions. [But] when coached and presented properly in accordance with an individual's skill and current fitness level, dance can be a tremendous way to improve health, and promote socialization, in a myriad of age groups."

Their doctors seem to agree. "That's the first thing [my doctor] asks when he sees me — 'Are you still dancing?' I say yes, and he says, 'Keep on dancing!'" says Sleeth.

In a group whose members' ages range from mid-60s to mid-70s, health is of primary importance. And not only does the exercise strengthen their bodies, the choreography stimulates their minds. "Talk about it being good for your brain — I call it math on your feet," says Susan Reiter. "It's all the patterning, and then having to retain and retrieve it."

In the end, though, it's not their improved health that keeps the Spring Chicks coming back for more, it's each other. Together since 2008, these ladies don't plan to quit anytime soon. And they're open to other women who share their passion. "We're very open to include anyone who has that same love of music and dance," Reiter says.

Celestino provides a final piece of advice for anyone eager to accept the Spring Chicks' invitation: "Women after the fifth to sixth decade of life should consult their physician before taking up a new sport or activity for which they have no prior experience." n

For more information, or to schedule a performance for your organization or fundraiser, call (509) 290-0245.