Kicked to the Curb

A new city ordinance could curb panhandling on major city roads, but is it really about keeping people safe? 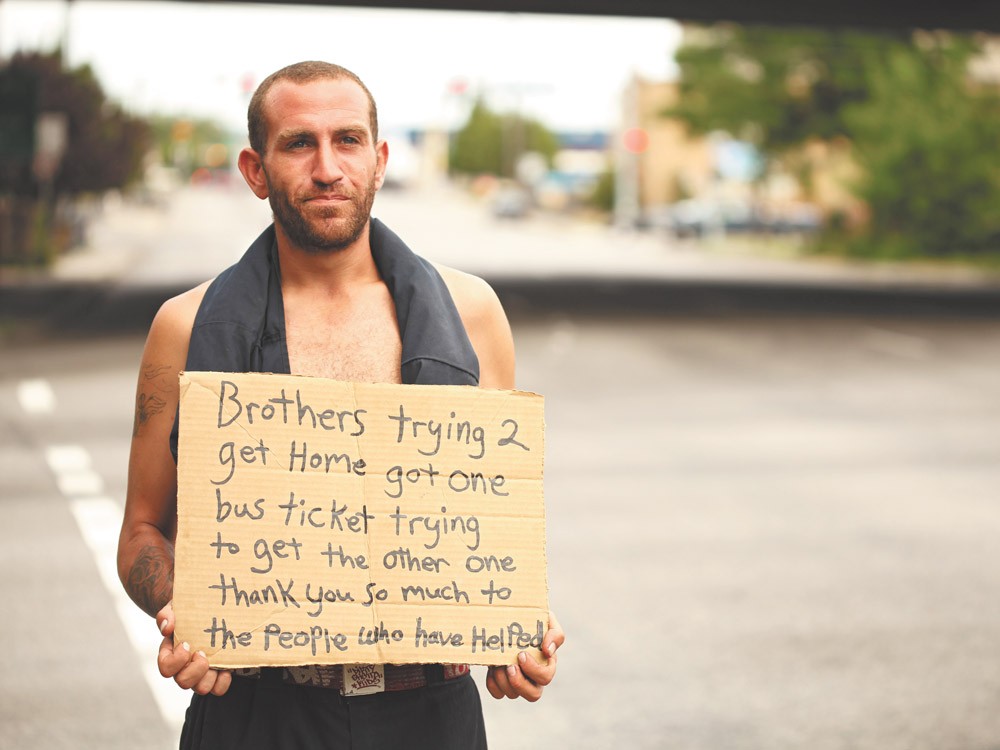 Young Kwak
Kevin, who didn\'t give his last name, panhandles at Fifth Avenue and Walnut Street in Spokane. He says he\'s trying to get bus tickets for him and his brother to go home to California
Carla Alderman’s cardboard sign says “Need help - smiles, $$, food.”

Alderman, 50, clutches the sign with both hands on a hot Friday morning at the corner of Fifth Avenue and Walnut Street, just off the freeway in downtown Spokane. A pair of reading glasses poke out of a pocket on her white polka-dot tank top. She says an injury from a recent car accident left her out of work and bouncing between shelters and friends’ houses. She’s been holding a sign here almost every day for about two weeks, making about $20-$30 a day.

A proposed city ordinance would outlaw stepping into certain main streets to take money or goods from vehicles. (It would apply to state routes, on and off-ramps, principal arterials or the first 100 feet of a road that intersects with any of those.)

While it wouldn’t outlaw holding a sign asking for money or help, it would effectively quash the practice unless drivers pulled into parking spots to give handouts.

The Spokane Homeless Coalition and the nonprofit Center for Justice say they support the resolution. But other homeless advocates say instances of people getting hurt in the process are rare.

Lee Nelson, who works in homeless outreach for the Community Health Association of Spokane, hands out new socks and hygiene kits to people in need around Spokane and helps connect them with CHAS’s medical services.

“I’ve never heard of anybody falling or getting hit because of panhandling, and I talk to a lot of people who panhandle,” Nelson says. “This is another way for the city to clean up the area, if you want to call it that —” or to push away the problem.”

Spokane Fire Chief Bobby Williams, whose department responds to all emergency medical 911 calls, says he doesn’t hear about many injuries related to people stepping into the street to collect money or food from passing cars. The department doesn’t categorize calls based on whether the injured person was panhandling at the time of injury, he says, so he doesn’t have exact data.

“That is not something that is a reoccurring problem,” he says. “We have responded from time to time, but they are not a high-frequency response.”

Officer Tim Ottmar, the C.O.P.S. neighborhood resource officer for downtown and the South Hill, says he works with much of the city’s homeless population and only occasionally hears of people getting hurt by taking money from drivers. But he argues the ordinance is a “positive step” anyway.

“There’s not going to be a risk every single time, but it only takes one or two times of somebody getting injured,” Ottmar says. “We have to make sure they’re safe.”

Alderman says she doesn’t feel in danger as long as she pays attention and doesn’t cross lanes of traffic unless she’s sure the light will be red long enough for her to get there safely.

Councilman Allen insists his biggest worry is about safety, but says citizens also complain that people asking for money on the street are a blight and may use what they’re given for drugs or alcohol.

Nelson, from CHAS, says that’s not an entirely unrealistic concern. He sees some people who “fly signs” use the money for alcohol or drugs, while others use it for food or hotel rooms to avoid sleeping on the street.

Richard Henderson, 62, admits he uses the $30 he makes in an average day on the corner of Third and Division for “beer and weed.” That’s because he’s able to get plenty of food from various shelters and kitchens around town, he says.

Johnny Black, who after seven years in jail recently took to panhandling on streets and sidewalks around Spokane, says he’s honest with people he asks for money.

“I’m not embarrassed to ask people, to tell them, ‘Hey I’m just trying to get a cold one,’” he says.

But Linda Nelson, 28, and David Parisia, 41, who usually hold their signs on Jefferson Street near the freeway, say they’re “barely surviving.” Nelson, who’s homeless and seven months pregnant, says three years ago she could make $200 a day holding a sign. Now, she makes about $20, which she says she spends on food or trying to save for a place to live once her baby is born.

“Not everybody is out there just for their beer or their weed,” she says. “People are just trying to survive.”

Caught in the crossfire of the ordinance are local nonprofit groups that take to the streets to raise money. Firefighters solicit donations from cars in their annual “fill the boot” campaign to support the Muscular Dystrophy Association, and each April brings a penny drive from the Guild School, which serves 200 local children with developmental delays or disabilities. If the ordinances passes, those events wouldn’t be allowed in the street.

The Guild School raises about $70,000 during its one-day drive when volunteers man 16 sites across the city and in Spokane Valley. In 2010 Spokane Valley passed an ordinance Allen calls identical to the one he’s trying to pass. Guild School Director Dick Boysen says the group made half as much in the Valley once that ordinance took effect, and they had to direct traffic into a parking lot rather than taking money from cars in the street.

“It would be devastating,” Boysen says of a similar ordinance passing in Spokane. The school raises 35 percent of its $3 million budget privately through donations and events, including the penny drive.

Allen says he wants to exclude nonprofits from the ordinance, but his hands are tied. To allow certain groups to step into the street to solicit donations, while denying others the same right, would be unconstitutional.

“You can’t treat people differently based on their status,” says Doug Honig, a spokesman for the ACLU of Washington.

Governments will never be able to fully outlaw panhandling, Honig says, but they can impose restrictions if they can prove they’re reasonable regulations of time, place and manner rather than of the speech itself.

“Free speech includes the right to ask for money,” Honig says. “The fact that it may be uncomfortable for the person they’re asking to hear the request doesn’t mean they can’t make it.”

Restrictions like this “have to be based on very reasonable safety issues, not simply on wanting to clean up the appearance of a city,” he says.

But the government isn’t required to prove that unless someone challenges it in court, and Allen says he’s confident in what he’s introduced.

“Our hope is to get the people who really need help the help they need,” he says, “and clean up our gateways at the same time.”