Baby Doll is gonna poledance for you. Then she’s gonna rip out your kidneys. 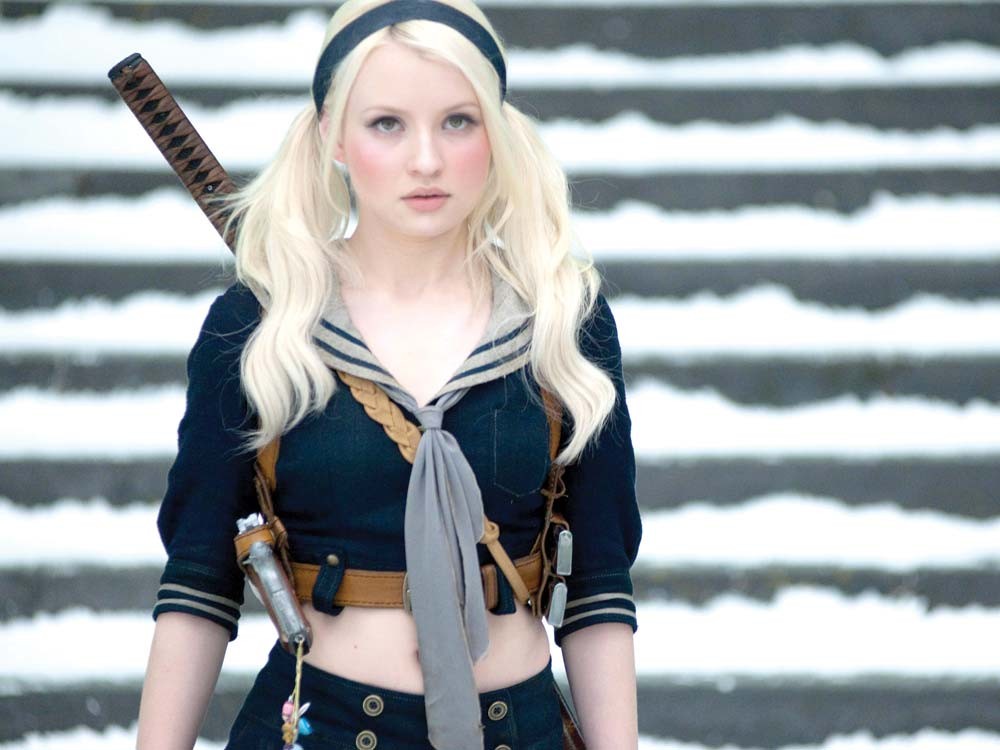 She’s been a naughty schoolgirl, but you’re not putting her in detention.

Is Sucker Punch an exploitation film with scantily clad women being used and abused by evil men? Or is it a celebration of feminism with the young women taking control and fighting back?

Eighteen-year-old boys might see a little of both. More mature viewers, both male and female, will likely lean toward the latter.

Sucker Punch — directed by Zack Snyder (Watchmen) — is big and flashy and ambitious and exhilarating, and it doesn’t resemble any movie you’ve seen before. With its heavily armed and physically fit female warriors mowing down hordes of German storm troopers (or are they steam-powered robots that look like Germans?), and with a B-52 bomber going up against a gigantic and very angry fire-breathing dragon, Sucker Punch looks and feels like a colossal video game.

There’s a grain of a down-to-earth story that starts the film rolling. A couple of family

tragedies lead an evil stepfather (Gerard Plunkett) to institutionalize his young daughter, Baby Doll (Emily Browning), and to sign an order to have her lobotomized before she can tell authorities what really happened at home. But Baby Doll plans to escape before the surgeon arrives, taking along some new friends who are also trapped in the asylum (Abbie Cornish, Jena Malone, Vanessa Hudgens, Jamie Chen).

Beyond that bit of “normal” storytelling, this film is bonkers. It’s hard to tell where the fantasy begins and ends. Before long, there are two additional layers of it, much in the way Inception featured levels of dreams. But then Sucker Punch somehow turns into a showcase of musical numbers that are triggered every time Baby Doll begins a dance routine.

Yes, a dance routine: Explaining the dizzying vortex of this film’s plot is quite a challenge. Just know this: In order to escape (if indeed anyone is really planning to escape), the five women must obtain certain “objects” from people at the asylum who would never otherwise part with them. To accomplish this, Baby Doll performs a series of interpretive dances — dances that are so damn awesome, so unbelievably mind-boggling, that anyone watching them is put into a trance. Then her cohorts can go around stealing the precious objects.

What results here are astounding visuals and set pieces revolving around the women, now transformed into warriors, going up against impossible odds (those Germans and that dragon are only the beginning of it). The soundtrack — loud, head-banging — is comprised of popular (“White Rabbit,” “We Will Rock You”) and somewhat obscure (“Tomorrow Never Knows”) songs that have been all chooched up and over-arranged to complement the outrageous action.

Things calm down but retain an insidious air every time the story returns to the asylum. (OK, there’s a good chance that it’s actual a brothel.) Viewers barely have time to catch their breath.

Besides, there are so many other things to think about: How many characters are having their own fantasies? In what decade does this take place? Are the filmmakers fans of Ambrose Bierce’s An Occurrence at Owl Creek Bridge?

An off-screen narrator keeps telling us that we control the world we imagine. Zack Snyder is in complete control of the world of Sucker Punch. And he’s very imaginative.