King of the Blockbusters

Kong: Skull Island is a surprisingly solid reboot, as exciting as it is knowingly goofy 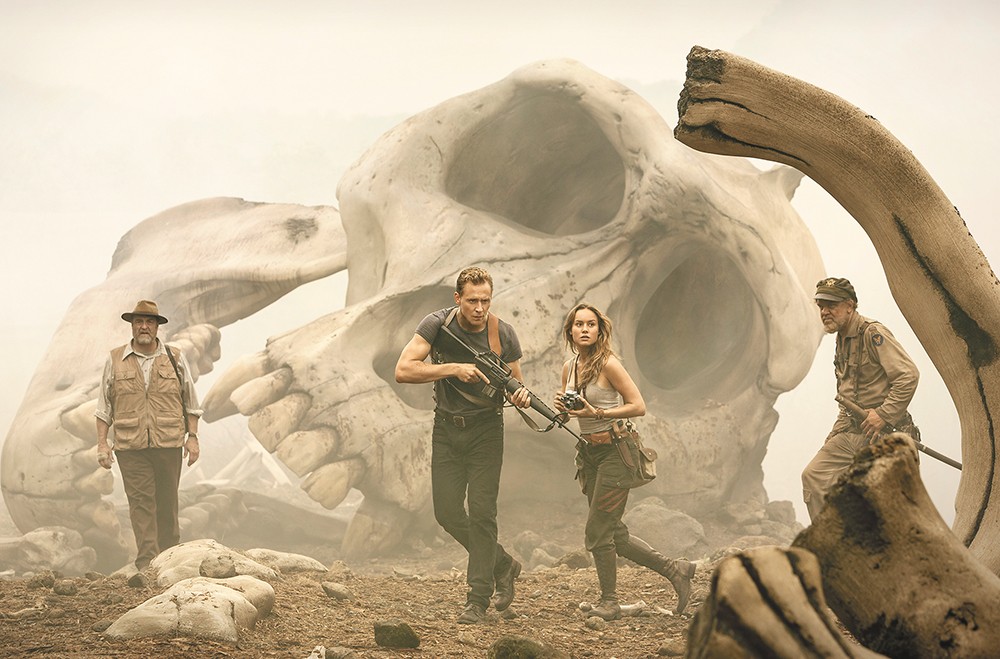 This probably isn't the relaxing island getaway they were hoping for.

No, it's not a secret sequel to Peter Jackson's 2005 King Kong, and no, it's not a sequel to 2014's Godzilla, though the two share a universe. No, the big surprise — not a spoiler — is that Kong: Skull Island is actually a prequel to Godzilla.

After a brief introductory sequence set in 1944, the action jumps to 1973 and stays there, which lends a delicious retro analog vibe to the goings-on. A good reason to set this tale in 1973: It allows for mysterious Skull Island, hidden by a perpetual storm, to recently have been discovered in the South Pacific by the first Earth-mapping satellites. Scientist Bill Randa (John Goodman) finally gets permission to take his team on a mission to the island; he has a pretty good idea what's there via his top-secret government project, Monarch (referenced in Godzilla), which is documenting the existence of "massive unidentified terrestrial organisms." (It's like an X-Files for monsters.)

So off they go, accompanied by "tracker" James Conrad (Tom Hiddleston), photojournalist Mason Weaver (Brie Larson) and an escort of U.S. military personnel who are about to be demobilized from Vietnam. Once on the island, they meet Hank Marlow (John C. Reilly), who was shot down over the island in 1944 (that's the opening sequence) and has been stuck there since.

Boiled down to its bonkers essence, Skull Island is a Vietnam War movie with monsters. (Kong is far from the only one.) There's even the war-addicted, possibly insane Lt. Col. Preston Packard (Samuel L. Jackson), who is quite upset about the whole not-winning-in-Vietnam thing, going full Ahab and fixating on Kong as a "war" he can win. (He might be underestimating the capabilities of his squad.) So while Skull Island has ironic fun with a running motif about how war can make a man see enemies everywhere (including in a giant ape that was just minding his own business until humans started dropping bombs on him), there's also a man-versus-nature thing running alongside it: Mess with nature, and nature will mess right back, ferociously.

It's like Jurassic Park with a lot less wonder and a helluva lot more horror. Oh, the gruesome, intense ickiness here! This movie really pushes the boundaries of a PG-13 rating — or maybe it only feels that way when you're watching in 3-D IMAX and it feels like the jungle bug slime and the gore and the monster vomit is all over you. This is a rare instance of 3-D being put to actual use onscreen, rather than just serving as an excuse to hike ticket prices: There is real depth in the jungle, real dizziness to be found looking down from a high cliff.

All the horror and the black comedy and the monster battles and the homages to a slew of other films — it all works, even crammed in like this, thanks in large part to the terrific cast taking it just seriously enough. Reilly steals the show as the lost-in-time pilot, but Hiddleston, in his first true action role, is a close second, plausibly rougher and tougher than we've seen him before. Larson's role could be meatier, but she is not a damsel in distress, and she is not there for Kong to inexplicably fall in love with. (In fact, the most offensive Kong tropes have been excised, though they are alluded to.)

One or two groans are a necessary response to an obvious choice or two on the soundtrack of mostly awesome '70s rock tunes, but that's not much to complain about when so much could have gone badly wrong here. After Peter Jackson's Kong, I would have said that we didn't need another reboot. But I'm glad we got this one. ♦

Kong: Skull Island is not showing in any theaters in the area.