Rent is about relying on your friends — both onstage and off 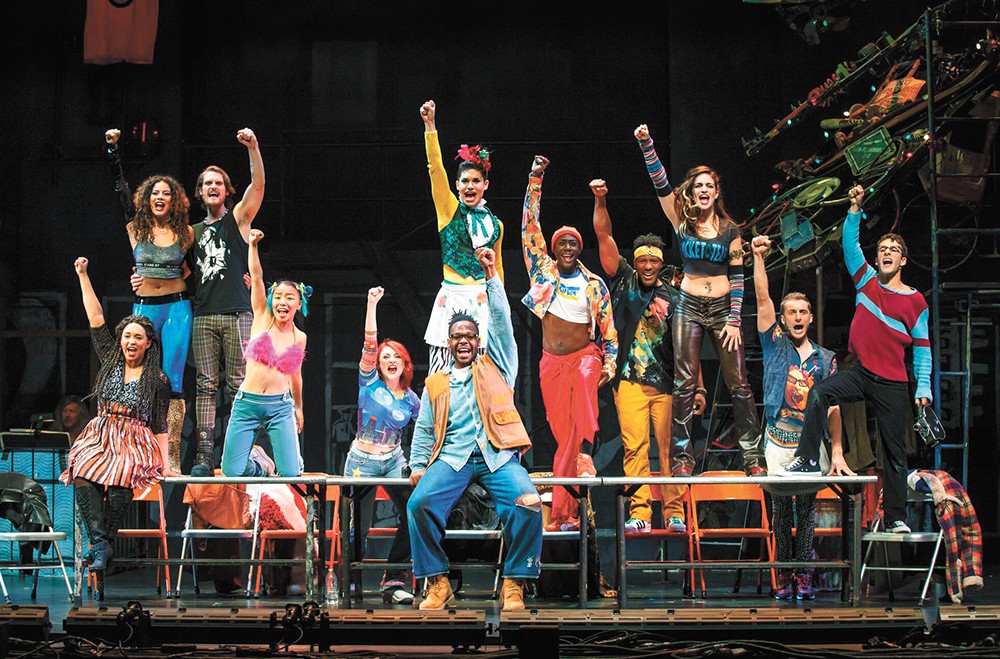 Carol Rosegg
"Rent is still a story about [people] who are struggling with their place in the world," says Skyler Volpe, who plays Mimi Márquez in the nationally touring production.

times have changed since the rock musical debuted nearly 22 years ago. The HIV/AIDS epidemic that figures so heavily in its story, for example, is no longer front-page news. At the same time, some of the challenges faced by its marginalized characters — discrimination, homelessness, addiction — have steadily gained mindshare in the mainstream consciousness. There's even a case to be made that works like Rent helped to bring that mainstreaming about.

"Now, because there's some distance, audiences are able to see the relationships between the characters a little easier and with a little more clarity. It opens your eyes to all of the other things that are happening. The story isn't overshadowed by the disease," she says.

Much like Puccini's La bohéme, the 1896 opera on which Rent is loosely based, the intensity of our response to specific details might wax and wane, but the universalities at its core remain the same.

"Rent is still a story about [people] who are struggling with their place in the world, their own mortality, and how they're going to be defined and define themselves," says Volpe. "Fundamentally, Rent is about this family of friends, how they relate to each other, how they choose to live their lives."

"Even though Mimi's 19 and dying and doesn't really know love, she finds so much lightness in that. The first time you meet her is in [the song] 'Light My Candle,' where she's cracking jokes and flirting. Being comfortable with comedy helped me dig into the character and make her likable, ultimately, and make you empathize with her as she goes through the second act of the show, which is really heavy," she says.

But Mimi's fraught emotional situation wasn't the most formidable aspect of the role.

"The most surprising thing was the physicality," says Volpe. "Everyone knows [the number] 'Out Tonight' — it's iconic and it's big and it's loud. We're hanging off of bars. But then, she's dying. So, physically, at the same time I have to convey this person who loves life and feels so alive, and yet she's dwindling. Every second, there's less Mimi. Finding the balance between that explosive energy and the exhaustion that sort of energy entails was really hard."

What's helped to sustain Volpe in meeting the demands of a challenging role during an equally challenging nationwide tour is exactly what sustains Mimi in Rent: a circle of friends in the form of cast- and crewmates, who quickly form a close-knit collective every time there's a personnel change.

"There are definitely times when we're going from bus to hotel to theater and we don't see the town. It gets hard," she says. "But there's really no scenario where you perform Rent, and it's good if the cast and the crew and the band didn't form lasting bonds. You have to go to some really dark places, and you have to be able to trust that everyone's going to be there with you. It's a part of the show and a testament to the show."

In fact, for all the attention that Volpe gets as a lead actress, "the effort that we all put forth together" is the thing she most hopes audiences recognize and take away from the performance.

"The effort of our production mirrors the story arc. When it's great, it's because we're all great. And that's what the story of Rent is — all of these people showing up for each other." ♦