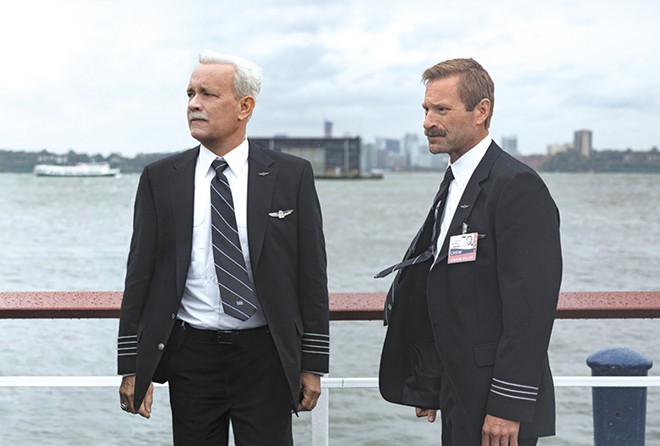 Spoiler alert: The plane lands in the water.

Clint Eastwood's Sully tells the story of Captain Chesley "Sully" Sullenberger (Tom Hanks) piloting a commercial airliner to a water landing on the Hudson River with zero casualties (dubbed "The Miracle on the Hudson") in January 2009, and the ensuing investigation by the National Transportation Safety Board to determine if Sullenberger was at fault.

Well, remember how the plane actually crashed into the New York skyline? Or the scandal when it turned out that Sully was an incompetent pilot who needlessly endangered his passengers and crew for no reason? Of course you don't. That didn't happen. Therein lies Sully's major problem — it's a movie entirely devoid of dramatic stakes.

Sully's problem isn't that it's a poorly made film. The execution is fairly solid across the board, but it lacks a reason to be made in the first place. While not on the award-worthy tier, Hanks delivers an understated everyman performance as Sullenberger. He's the portrait of anxiety under a calm exterior, as he struggles with seeds of doubt planted by the NTSB that he may have made an error, as well as press attention and general post-traumatic stress disorder. The latter issue manifests itself in the film's most jarring sequences, via trigger-warning-worthy nightmares that could still shake those traumatized by images of planes flying into New York buildings.

Aaron Eckhart deftly adds a sense of smooth ease (and light comic relief) to the proceedings as Sullenberger's co-pilot, Jeff Skiles. The script affords short side stories to a few of US Airways Flight 1549's passengers in the name of humanization; they end up being brief to the point of feeling like filler to pad out the 96-minute runtime.

The narrative conflict becomes man (Sullenberger) versus machine (the computer simulations that say he could've made it safely back to the airport, and the NTSB officials who treat those calculations as gospel). More to the point, it's old-school instincts versus fancy-schmancy technology and analytics. In that sense, Sully is the anti-Moneyball. As the NTSB characters go aggressively over the top, grilling Sullenberger (despite... you know... everyone being safe), he speaks to his gut feelings: how he completed thousands of flights over the course of 40 years, and how "engineers are not pilots. They're wrong. And they weren't there." The script, by Todd Komarnicki (Resistance, Perfect Stranger) presents this thesis with such a bludgeoning lack of subtlety that the technophobia has a "get off my lawn!" feel. But that forced tension lacks authentic drama. (Do you really think that Clint Eastwood, of all people, would make a shocking exposé that drags an American hero through the mud?) Sully's climactic sequence is literally people watching flight simulators in real time. No matter how much manipulatively tense music you place underneath it, it's still watching people watch a flight simulator.

As Eastwood's straightforward and simplistic directing style pushes the drama-free plot forward, the dim, cool color palette employed throughout only further dulls the proceedings; it's not a turbulent ride. Ultimately, it's impossible to shake the feeling that Sully is nothing more than pointless, quasi-patriotic fluff made by an old white guy for his fellow old white people. ♦

Sully is not showing in any theaters in the area.