The most highly touted recruit in Gonzaga history

isn't always the first player off of the bench for Mark Few's squad.

Zach Collins, the first McDonald's All-American to commit to Gonzaga out of high school, ranked third on the team in rebounds per game (5.7) and fourth in scoring (10.2 points per game) heading into March Madness. The freshman forward has all the skills of a modern 7-footer: He can battle inside — his 58 blocks rank first on the team — but he can also step out and shoot, as indicated by his 45 percent accuracy from three-point range.

Yet he averages just 17 minutes a game.

He may be playing limited minutes now, but Collins' future is bright. His name is being floated by many, including ESPN's Jeff Goodman earlier this month at the West Coast Conference Tournament, as a potential first-round pick in the NBA Draft.

Collins graduated from Bishop Gorman High School in Las Vegas, so the WCC Tournament served as a homecoming of sorts.

"I'm super excited," Collins said before the tournament. "Anytime you get to go home and see your family when you're away at college is really nice."

But the purpose for the trip was basketball. Coming off a loss to BYU in the regular season finale, he and the Zags needed to be on their game. Reserves often see their playing time shrink in March, and that was the case for Collins during the WCC as well. But as he's done all season, he made the most of his minutes.

"Zach's been all business all year," teammate Nigel Williams-Goss says. "And Zach was Zach as usual."

Collins' business has only gotten better in the NCAA tournament so far. In the Zags two games in Salt Lake City, Collins led the team in blocked shots and was their second-leading scorer against both South Dakota State and Northwestern. Against the pesky NU squad in the game to advance to the Sweet Sixteen, Coach Mark Few kept the freshman in the game down the stretch over more experienced Zags, and it paid off.

In 21 minutes of playing time, Collins racked up 14 points and five rebounds. And perhaps more importantly, he hit six of his eight free throws in a game where most of his teammates were struggling from the line.

Clearly, after 35 games, Collins is a go-to player on one of the best teams in the nation, and nothing like a typical freshman. 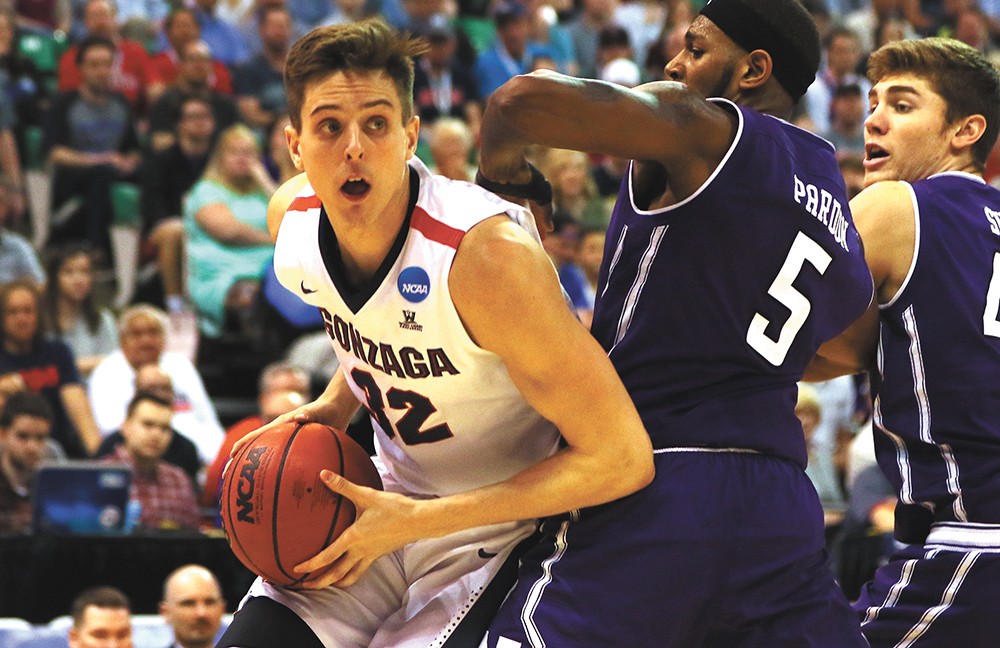 His Bishop Gorman team won the Nevada state title in each of his four seasons. As a senior, he broke the state single-season records for rebounds and blocked shots and was named Nevada Player of the Year. His accomplishments, not surprisingly, drew a lot of interest.

When he committed to Few's program in the spring of 2015, his prospects to start as a freshman seemed strong, and not just because of his talent. Kyle Wiltjer and Przemek Karnowski were both expected to be done with school by the time Collins arrived. Karnowski is still here, as is transfer Johnathan Williams.

But coming off the bench is nothing new to Collins.

At Bishop Gorman, he played behind McDonald's All-Americans Chase Jeter (now a sophomore at Duke) and Stephen Zimmerman, a rookie with the Orlando Magic. It wasn't until his senior year that Collins became his school's star.

That experience is no doubt paying dividends for the energetic super-sub this season.

Collins managed just four points in the WCC Tournament final victory over Saint Mary's. But late in the game, he put back a missed Karnowski free throw. The crowd's reaction to the hometown kid's play was one of the loudest moments of the tournament. It was part of a minute-long sequence of pure aggression from the Zags that completely blew the game open — a sequence perhaps spurred pregame by Collins' taste in music.

Before games, if he's looking to get into a mean or aggressive mindset, Collins likes listening to Disturbed or Green Day.

He's also a big-time, unprecedented player for the Zags — a McDonald's All-American coming off the bench as part of Gonzaga's powerful, unrelenting frontcourt attack. ♦