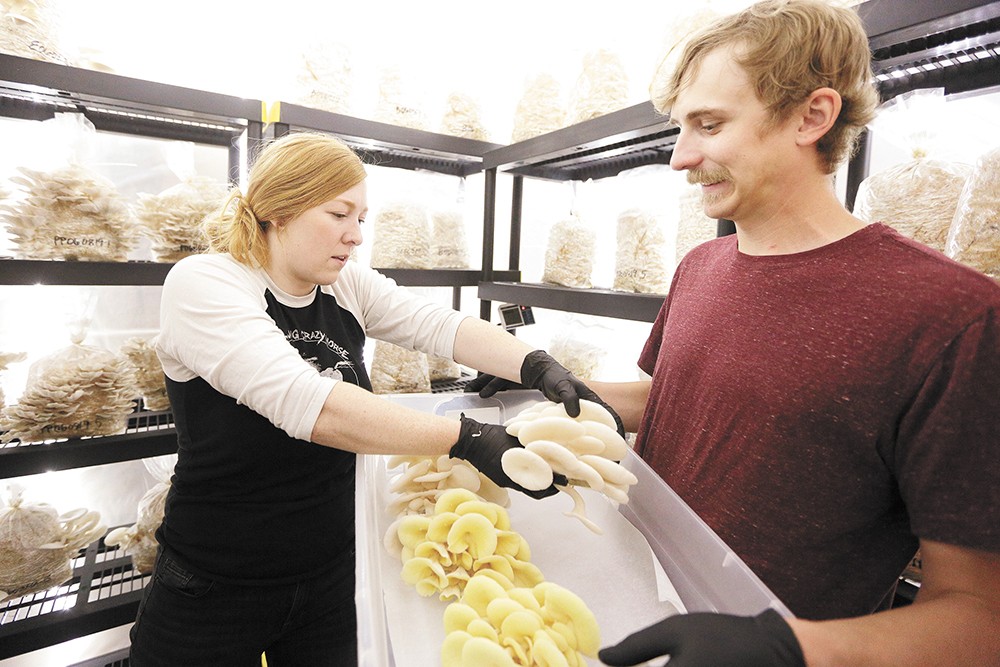 Maybe it's a texture thing, or the fact that many words used in discussing mushrooms — spore, spawn, fungus — sound vaguely sinister. For people who don't like mushrooms or have never ventured past the ubiquitous button variety, the very idea of eating a bulbous, unevenly-shaped thing called an oyster mushroom or furry-looking lion's mane mushroom may be a tough sell. But for others, including numerous Inland Northwest restaurants, the presence of not one but two thriving mushroom farmers is good news.

"Soft, velvety, creamy, buttery, delicious." That's how Krysta Froberg of Happy Mountain Mushrooms describes the oyster mushrooms she grows with partner Tanner McKinlay in a converted garage next to their Spokane home.

"If you don't like oyster mushrooms, you probably haven't prepared them well," Froberg says.

Sauté them in butter and garlic and eat as a side dish, she suggests. Add to pizza or scrambled eggs. Chop up pink ones — oysters come in various colors like blue, pink, yellow, white and brown, each with a slightly different taste — and mix into ground meat for a bacon-y flavor.

Mushrooms can also be pickled, she says, which is what the Grain Shed, Happy Mountain's lone restaurant client, does.

Happy Mountain Mushrooms currently sells at several area farmers markets ($6/pint or $10/two pints), including both Kootenai County markets in North Idaho, along with the Fairwood, Liberty Lake, Emerson-Garfield and Perry farmers markets in Eastern Washington. The farm's community supported agriculture (CSA) program offers assorted mushrooms at $9/two pints or $16/four pints weekly for 12 weeks. The farm is also working on "grow your own" kits, priced around $20, allowing budding fungiculturists to grow around half a pound of oysters or more per kit. 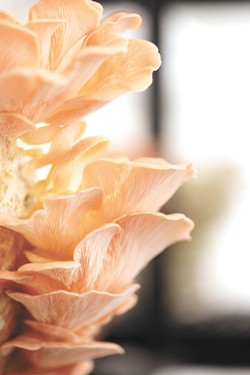 Varieties of cultivated mushrooms, versus foraged like morels, include enoki, shiitake and the most common varieties of button mushrooms — cremini and Portabella. These account for 90 percent of worldwide consumption, yet are actually different stages of the same mushroom; buttons are the youngest and mildest, intensifying in flavor and darkening in color to a cremini, and finally the large Portabella.

Even though mushrooms are sold in the produce section, they're not plants. They're high in fiber like plants, yet also high in protein and amino acids, more like meat, but with no cholesterol and almost no fat. They reproduce through spores, not seeds, and whereas plants get their food via photosynthesis, transforming sunlight into sugar, mushrooms and other fungi feed on the decomposition of non-living organic matter, such as downed logs.

For Sasquatch Sous owner Kilbourne, mushroom farming was borne of necessity. A retired tattoo artist and a longtime state-appointed guardian for the disabled, Kilbourne has also been a member of the Spokane Mushroom Club since 2002. She remembers foraging locally for porcini, matsutake and other varieties, until wild mushrooms became harder to find.

"Whether you give much credence to climate change or not, climate changes have just ruined us," she says. "When I couldn't find them anymore, I decided to grow them."

Both Happy Mountain and Sasquatch Sous follow a similar farming process. They purchase mushroom spawn, typically grain or sawdust to which a certain part of the mushroom called the mycelium has been added, and mix it into a container filled with substrate or growing medium, such as straw or wood chips. This provides food for the hungry organisms.

First, the growing containers — both farmers use plastic bags filled to about a pound each — are incubated for two to three weeks in warm, dark conditions. Here, the mycelium grows, colonizing the substrate with a fine white web, looking like tiny plant roots. The containers are then moved into cooler, more moist areas where air flow is controlled, simulating autumn-like conditions. When the mushrooms "pin" or poke out of the bag in little dots, they're actively growing, a process called fruiting. After four to six weeks, the "flush" of mushroom growth is cut off, and one or two more batches are allowed to grow before the substrate is recycled into compost.

It's a continual process, says Froberg, who figures that the 150 bags of substrate currently in Happy Mountain's grow room will yield about 100 pounds of oyster mushrooms.

Both farmers are vigilant about details like temperature, cleanliness, humidity, timing, batch numbers and yield. They're also keen on exploring new techniques and applications, including medicinal mushroom use. Lion's mane, says Kilbourne, is ideal for tinctures, and continues to be studied for treatment of depression, reducing inflammation and risk of heart disease and helping manage diabetes.

"In Asia, the number one cholesterol medicine is from an oyster mushroom," says Froberg, who earned a bachelor's in biology/microbiology before joining the quality management team at Aloha Medicinals, a leading cultivator and supplier of medicinal mushrooms out of Nevada.

Mushrooms, she notes, contain ingredients that counteract the detrimental effects of alcohol on the body, which works out well for the couple since Froberg's partner McKinley brews beer, including for River City Brewing.

"We drink a lot of beer, and we eat a lot of mushrooms," says Froberg. ♦

The original print version of this article was headlined "Fabulous Fungi"