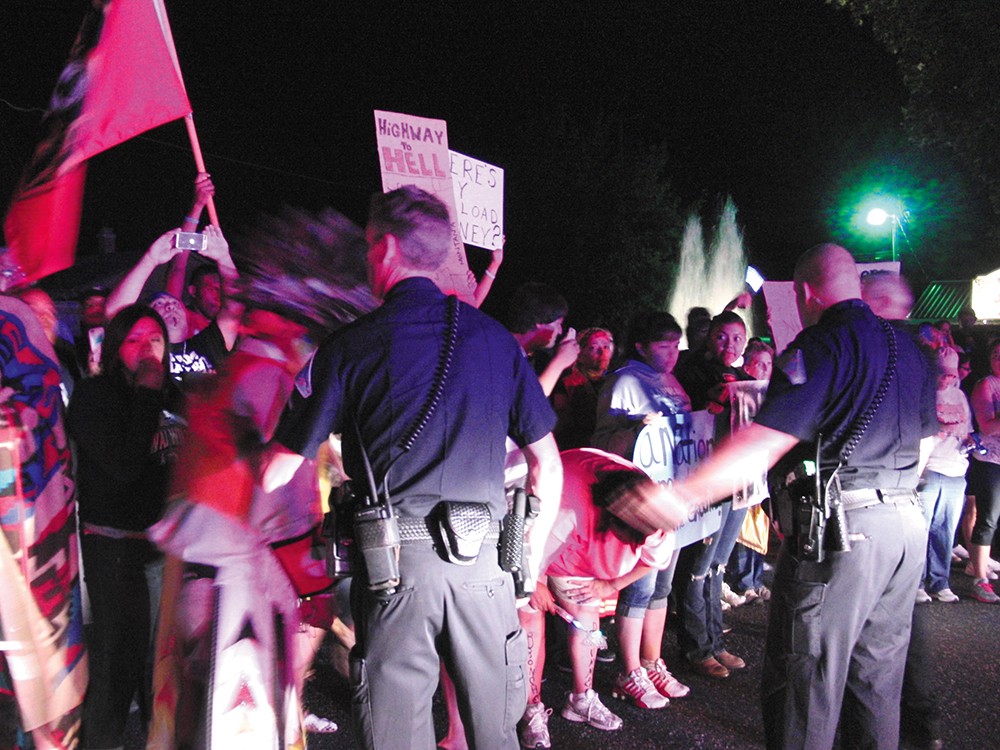 We’re flying 70 miles an hour down Highway 12, past Syringa, Idaho, 15 miles east of Kooskia in Cass Davis’ beat-up blue rig. Davis doesn’t have a plan — not a solid one, anyway — just a destination in mind and a dream.

“I wish we had some f---ing equipment,” says Davis.

“Yeah,” Brett Haverstick shouts from behind the wheel. He’s a 30-something dude with a scruffy orange beard and red bandana around his head. The windows are open. Above their voices, all you can hear is the whoosh and hiss of wind.

Davis is crammed in the backseat with posters and gear. He’s 49, ruddy and wired, wearing zip-off khaki-colored pants, sandals and a 10-day-old beard. He’s a self-professed “eco-communist” and, after losing his job at a Moscow food co-op a few years back, he’s been a professional activist, too.

“I thought that was it, too,” Haverstick says.

By “equipment,” Davis has a few things in mind: Cables that he could thread through the trees and across the road for an elaborate tree-sit in the towering firs and pines along Highway 12. Or chains and concrete barrels to anchor feet to the road, so he and his comrades could go toe to toe with an incoming hauler roughly the size and shape of a wingless Airbus jumbo jet, shipping 644,000 pounds of machinery.

Right now, all they’ve got are bodies, headlamps and posters that say things like “Crime Against Nature,” “No to Big Oil Tyranny” and “Respect Existence or Expect Resistance.” They’re expecting a couple dozen more protesters to join them — environmentalists, climate activists, fed-up locals and Nez Perce tribal members — at Mile Marker 120 on Highway 12.

“Only in Idaho,” says Haverstick.

The so-called megaload is a massive General Electric-owned water evaporator bound for the tar sands in Alberta, Canada. The shipping company, Oregon-based Omega Morgan, plans to move nine more similar loads on this narrow two-lane roadway, cutting through the Nez Perce Reservation and federally protected Clearwater-Lochsa Wild and Scenic River Corridor in spite of opposition from the U.S. Forest Service officials, who claim authority in shipments across public lands.

The protests from Nez Perce tribal members and environmentalists broke out on Monday, Aug. 5, when hundreds of protesters formed a human barricade at the border of Nez Perce Nation and managed to halt the shipment for two hours. Their goal: Stop mining at the Canadian tar sands that ravage the landscape and contribute to climate change. Twenty people were arrested on charges of disorderly conduct that first night. Late Tuesday, children and teenagers hurled rocks at another shipment, stalling it for 15 minutes. Eleven more were arrested.

Now it’s Thursday night, and we’re running on a half tank of gas. We pass the confluence where the Selway and Lochsa Rivers meet to form the Clearwater. It’s pitch black on this narrow, two-lane stretch of road. Haverstick has the brights on. Up ahead, all you can see are imposing coniferous trees.

Davis says he’s jonesing for a “cancer stick.” Yesterday, Wednesday, he had bought and lost a $7 pack of cigarettes in minutes. State troopers and tribal police escorting the megaload and its convoy of vehicles met protesters blocking the road head on and, in just 10 minutes, broke past the demonstration.

Dozens of protesters then took off running after the megaload. Some went two miles on foot before jumping into cars to follow. Davis’ cigs were sitting on the hood when they revved behind a train of vehicles, inching for hours behind two police cruisers blocking eastward traffic. The megaload made it through Kamiah and into Forest Service lands uninterrupted.

Haverstick described law enforcement’s strategy as the “other side of the chess board.” Checkmate for Idaho. Protesters like Davis and Haverstick need to try guerrilla tactics, they say.

“Let’s get arrested tonight, bro,” Davis says now. “Let’s get arrested for mooning the f---ing megaload. Think about it man. Get four or five people together. Standing right in the middle of the road. … Let’s moon those motherf---ers.”

Haverstick imagines the headlines: “Full Moon on the Lochsa Stops Megaload.” Or: “Megaload Blinded by the Moon Stops at Lochsa.”

We’re cracking up. Davis can’t be serious. What would be the point?

“Sacrifice has to be equal, or we’ll never see change,” Davis says. “I’m not sacrificing so long as someone gets to play on their yacht. I don’t recycle! I’m a high and mighty environmentalist and I’m not wasting my time recycling until I see corporations starting to curtail the amount of pollution they’re pouring into our rivers, until I see fracking stopped. It’s a waste of my time.”

We drive 20 miles down a winding dirt road through the Selway River corridor until it dead-ends at a white sandy beach enveloped by clear, green falls and untouched forest.

Davis grew up in the Silver Valley in the ’70s in a union family in a booming mining town. He’s an Earth First! “radical” (his word) and seasoned activist. He was arrested once, three years ago, protesting an Imperial Oil megaload. Three times, he wonders aloud if I’m an undercover FBI agent, operating a sting. But he has nothing to lose — no savings, no income, hardly any material possessions. He could be arrested tonight, but he can’t plan on it. Otherwise, he says, he could be charged with a conspiracy charge.

None of the men in his family have lived long past 60. He doesn’t expect to either. He has no plans to have children because he’s confident climate change will spawn mass desperation and nuclear war. All politicians talk about these days is the economy at the expense of our environment.

“Never does ecology come into the debate,” he says. “Are we keeping the environment where we can have clean drinking water, breathable air, nutritious food? … We’re destroying our goddamned planet.”

The car suddenly stops. Davis says he’s gotta take a swim in the Selway. He rummages in his trunk for his swim shorts. He digs out a pair of purple trunks. He jumps in the river and paddles to the other side, floats on his back. Osprey and golden eagles sweep above the horizon. Cedar, grand fir and Engelmann spruce surround us. This is his favorite spot.

Davis doesn’t know what the answer is — how to make people care. It’s impossible, frankly. Still, he says: “My DNA tells me to struggle despite all odds.”

“Idaho is not for sale!” a woman yells.

And we’re running to our cars again.

“I thought that’s what—”

“But hey, no one was doing it. I’m not gonna, you know — besides,” Davis adds, “We can pull some sort of stunt and like stop the megaload up here.”

It’s so dark now that parked alongside the road you can barely see the outlines of trees. The only light reflects off the sheen of the guardrail. We’re at Fish Creek — known as Sistine Chapel of wild steelhead runs in the Clearwater-Lochsa corridor — and just past an aging bridge that engineers fear could topple under the weight of the entire megaload. The shipment will have to be taken apart before it can cross.

A glowing white behemoth starts to round the bend. Two bright lights illuminate a yellow sign on the grill of the truck: “OVERSIZE LOAD.” The megaload is crawling at a snail’s pace as foremen prepare to cross the bridge.

Three police cars pull up, and Ken Yount, a young, brawny no-nonsense sergeant from the Idaho State Police, approaches the protesters, flanked by a gaggle of officers. “[I] respect your position,” Yount says. “But we just don’t want anyone to get hurt.”

“We’re gonna ask you to stay off the paved portion, off that shoulder. We’re gonna have zero tolerance. We’ll advise and warn, but if somebody were to step out, we’re gonna make arrests. We don’t want to take anybody to jail tonight.”

A burly Nez Perce man who’s been at the demonstrations every night, holding a sign in the Nez Perce language, heckles Yount.

“What about our rights to peacefully assemble?” he shouts.

The hauler roars. The convoy stirs. The 644,000-pound load is all wheels and steel, lit up like a Christmas tree. Protesters wave their signs and taunt the foremen. Davis has crawled underneath the bridge. He’s pounding tree trunks like a drum.

Protesters watch from the side of the road as the lights from the caravan fade into the forest.

The megaload and its entourage roll away. The cops leave.

Haverstick shakes hands with the reporter from Lewiston’s KLEW-TV. Some of the tribal leaders have nachos in carry-out boxes waiting for them in a van. Davis chats up other activists; he’s already planning his next protest.

A young Nez Perce man folds his hands in his hoodie, looks up and speaks to no one in particular.

“As soon we got here, you could see every star in the sky,” he says. “You can hardly see any of it now.”