It's a simple hashtag that unloads a terrible burden.

Women everywhere are finding their voice and standing up to men who have used their positions of power to sexually harass them — or worse. Despite the sordid stories, this is a positive trend, because it emboldens those who have stayed silent out of fear of career destruction. The victims can actually find strength in the numbers.
click to enlarge 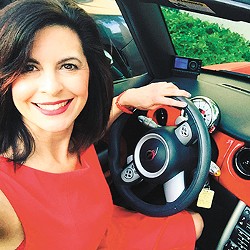 Stephanie Cates is the chair of the Spokane County Republican Party.

But what of the numbers? Are all men predisposed to be predatory, smarmy, vile creatures who can't keep their hands to themselves and treat women as expendable? Thankfully, no. The only men to blame for sexual misconduct are the individuals who actually commit the misconduct.

If looking to place blame on a larger societal level, I would point to two things:

1. The decline of traditional virtues, to the point they are mocked. Remember the ridicule and outrage feminists expressed over Mike Pence's policy of not dining alone with a woman other than his wife? His principled stand looks better with each passing day.

Furthermore, masculinity is not the culprit! We won't solve the problem by compelling men to get in touch with their "feminine side," or forcing boys to play with dolls instead of monster trucks. I happen to like the fact that men and women are different. We were created to complement each other, and we should celebrate that.

So, now that the perverts are exposed and the powerful are toppling, how do we move forward and decrease the likelihood of this happening again?

For one, we need to return to holding gentlemanly behavior in high regard. Men need to practice it, and women need to demand it — not just in the workplace, but in our social and dating lives as well.

Second, let's emphasize healthy personal boundaries and self-respect. Women my age need to encourage younger women to embrace their inherent worth and carry themselves with dignity. Sorry ladies, but you don't command respect by shouting vulgarities and parading around in vagina hats. If we degrade ourselves down to just our body parts, how does that affirm a woman's worth? How does that teach men to value our hearts and minds? It doesn't.

Thirdly, let's restore the importance of fathers. Too many men shirk their responsibility to care for the children they bring into this world. Rather than indulge men's weaknesses, the culture should require them to "man up" and honor their commitments to the mothers of their children.

And finally, here's something that's a great equalizer in our battle for equality: the Second Amendment. I guarantee a man will think twice about messing with a woman who carries a firearm and knows how to use it.

#MeToo is shining a light on some of the darkest parts of our culture, dismantling power structures, and giving a platform to those who previously were brushed aside. A sea change is happening. Let's take this opportunity to hit the reset button on our values. ♦