Author Tim O'Brien on writing, war, dying, Hemingway and his seminal work The Things They Carried 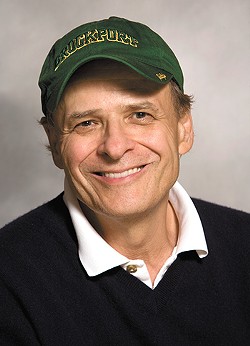 Tim O'Brien will read from some unpublished works.

Among students, writers and readers alike, The Things They Carried has been an object of study, inspiration and reflection

almost since the moment it was published in 1990. The book's interlocking, complementary and sometimes contradictory short stories about the Vietnam War have also become the most common point of entry into Tim O'Brien's larger body of work, which includes novels like July, July (2002) and In the Lake of the Woods (1994).

Throughout that larger body of work, beginning with the 1973 autobiography If I Die in a Combat Zone, Box Me Up and Ship Me Home, which launched O'Brien's career as an author, war has always been present — sometimes overtly in the setting, as in the The Things They Carried, sometimes as a formative quality of a single character, as in Tomcat in Love (1998).

"For me," says O'Brien, "war is an introduction to mortality. You go to war young, romantic and naïve, and suddenly when you're in it, your naïveté is gone, and you realize emotionally for the first time that you're going to die.

"And it happens to everybody. In the end, we're all going to end up where soldiers end up. We know it intellectually, but we do cocktail party chitchat and we wash the dishes and we care about the oil level in our cars and things like that. We find that we do whatever we can do to erase it. And war does not let you erase it."

It's been more than 14 years since the publication of his most recent long-form work, and O'Brien, now 70, has begun to dwell on other aspects of mortality, though still partly through the prism of war. For years, he's been working on a novella-length essay he describes as a "bizarre, very hard-to-describe memoir" that uses four Ernest Hemingway short stories — "A Clean, Well-Lighted Place," "Cat in the Rain," "The Killers" and "Soldier's Home" — as a framework for personal reflections on his craft, his family, the sense of "endingness when you have a child" and how "youth itself gets erased" as we're swept along by life's currents.

Back in 2011, O'Brien shared early drafts of his recent writing with local Get Lit! audiences. During his upcoming appearance in Spokane as part of Gonzaga's Visiting Writers series on Feb. 6, he'll be reading from the still-evolving "memoir filled with stories."

"It's really hard to talk about it," he says, "so that's why I'm probably just going to read from it. Because it'll explain itself, I hope."

Not to say that O'Brien plans to brush aside his most popular book to date. At the university's request, he'll also revisit the themes, mechanics and legacy of The Things They Carried for the benefit of emerging writers in the audience. And in that way, the reading should provide one more illustration of how O'Brien's best-selling work acts as a bridge to his wider creative output:

"I feel an excitement and also an anticipation as to how people will respond to this, and to the connections between this book and The Things They Carried, which I think are pretty strong. But they're certainly not identical." ♦