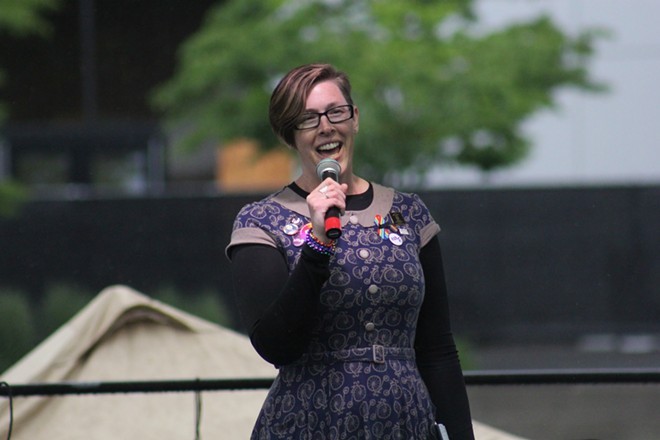 When President Donald Trump met National Teacher of the Year Mandy Manning in May, he praised her "vital role in the well-being of our children."

Yet at the time, children were being detained and separated from their families at the border. To this day, there are more than 10,000 migrant children held in detention centers across the country.

That's why Manning, who leads a classroom of refugee and immigrant students at Ferris High School in Spokane, has spearheaded a campaign called Teachers Against Child Detention. Next month, she and other teachers from across the country plan to hold a "teach-in" in El Paso, Texas, advocating against the detention of migrant children.

"We are putting children into detention facilities across the nation simply because they were born outside the United States," Manning tells the Inlander. "I know that's not something most people in the U.S. agree with."

Manning has been traveling all over the country as part of her Teacher of the Year duties. In October, she was at an event not far from Tornillo, Texas, where thousands of detained children were kept at a camp in a patch of desert. Manning felt like she had to do something about it, but was struggling to find what. She had written a couple op-eds to newspapers arguing against jailing children, but she thought she could do more. She reached out to some other teachers across the country, and they discussed creating a campaign that eventually turned into Teachers Against Child Detention.

The teach-in will be held on Sunday, Feb. 17. Manning says there will be teachers there educating people on topics, such as the history of immigration and how incarceration can traumatize children. There will also be music and some poetry during the all-day event. It will be broadcast on Facebook and YouTube from El Paso.

Manning says the original plan was to hold the teach-in in Tornillo, where the child detention camp was, but that camp since closed. But other detention facilities, like one in Homestead, Florida, are increasing the number of detained children.

"The closing of Tornillo proves that they can close these facilities and they're just not," Manning says.

Manning is still on release from the classroom at Ferris until she's finished with her Teacher of the Year duties. But she says when she thinks of the children being detained at the border, she thinks of her own refugee and immigrant students.

"Most likely, I have had children in my classroom who in a different time would have been placed in detention," Manning says.

Even when she gets back to teaching, she says she will make time to advocate for children like she is now. This isn't a Republican or Democrat issue, she says. She doesn't see her stance against child detention as a political stance at all.

"I would hope that people wouldn't see locking up children as 'Republican' or 'Democrat,'" Manning says. "These are children, and I'm a teacher."