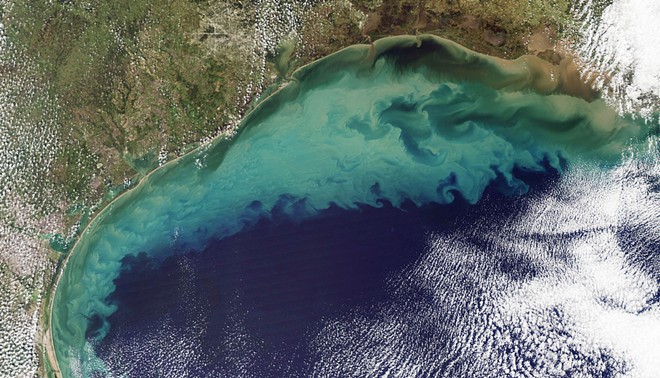 WASHINGTON — A new federal study has found that an oil leak in the Gulf of Mexico that began more than 14 years ago has been releasing as much as 4,500 gallons a day, not 3 or 4 gallons a day as the rig owner has claimed.

The leak, about 12 miles off the Louisiana coast, began in 2004 when a Taylor Energy Co. oil platform sank during Hurricane Ivan and a bundle of undersea pipes ruptured. Oil and gas have been seeping from the site ever since.

Taylor Energy, which sold its assets in 2008, is fighting a federal order to stop the leak. The company asserts the leaking has been slight. Oil plumes from the seafloor, Taylor executives have said, are from oil-soaked sediment that has formed around the platform, and any gas rising from the bottom is the natural product of living organisms.

“The results of this study contradict these conclusions,” the report, issued Monday by the National Oceanic and Atmospheric Administration and Florida State University, concluded.

Using sonar technology and a newly developed method of analyzing oil and gas bubbles rising through the water, scientists determined the plumes are the result of oil and gas released from multiple wells. They also found that as many as 108 barrels of oil, or just over 4,500 gallons, have spilled into the Gulf each day as a result of the episode.

The researchers also noted that their findings indicated lower levels of leakage than a handful of other recent estimates. Government attorneys in a federal court filing last year, for example, estimated that up to 30,000 gallons were leaking daily from the destroyed wells.

The study comes as the Trump administration works to roll back a key offshore-drilling safety regulation that was put in place after the 2010 Deepwater Horizon explosion in the Gulf of Mexico.

The Taylor Energy spill had remained largely out of the national spotlight until researchers monitoring satellite images of the Deepwater Horizon zone noticed “persistent oil slicks that appeared unrelated to the 2010 spill,” according to the report.

Taylor Energy said that it had not been able to study the underlying data in the new government report and that the company wanted “verifiable scientific data about the leak and a scientifically and environmentally sound solution.”