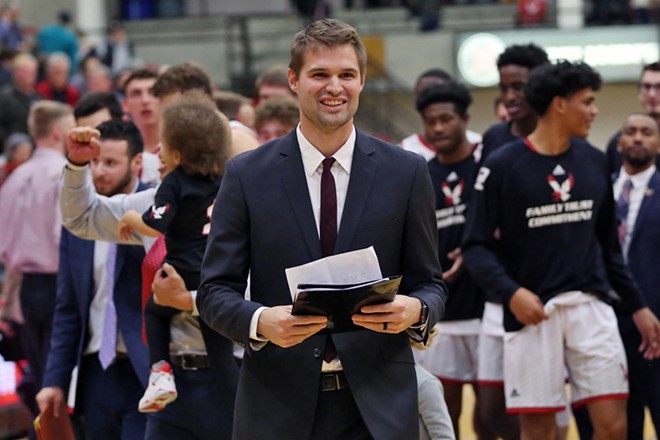 It's been a successful decade on the hardwood at Eastern Washington University, and the Eagles are moving forward with their accomplished lineage.

When it was announced in March that then-head coach Shantay Legans would be leaving the Eagles for the University of Portland, the program needed little time to find his replacement. Two days later, EWU announced that long-serving assistant David Riley would be elevated to the top job. It was a promotion that came as a surprise to no one.

"All signs pointed to David Riley deserving the opportunity to be a NCAA Division I head basketball coach," the school said in the opening sentence of their introductory press release.

They weren't lying about that, either. Riley, despite being just 32 years old, had 10 years of experience on Eastern's staff. Even more if you consider the circumstances of his career as a collegiate player across town at Whitworth.

"I played at Whitworth four years for Coach Hayford," Riley says, referring to Legans' predecessor at EWU, Jim Hayford. "My senior year was his last year at Whitworth. He offered me a grad assistant spot in his first year [at EWU]."

Riley followed Hayford to Eastern in 2011, right after his senior season. When Hayford left Eastern for Seattle University in 2017, the Eagles promoted long-time assistant Legans. Four years later, when Legans left for Portland, the Eagles elected to stay in-house once again.

"It shows a lot of faith and belief in what we have going here — in what we've built and the blueprint to our success," Riley says. "Jim Hayford came in and built something with an incredible foundation and went to the NCAA Tournament. Then Shantay built on top of that and put his own little twist on it. Now my job is to come in and do the same thing. At the end of the day we're sticking to the same general plan that's been successful for the past 10 years."

The past seven years specifically, after Hayford, Legans, Riley and company were able to lay their foundation, have been the most successful and consistent stretch in program history. The Eagles have a 157-94 record over that span, with six winning seasons. The program has made three NCAA Tournaments all-time, with two of those coming in the past seven years.

What's been the secret to this success? To Riley, it's simple.

"I think it starts with the people," Riley says. "Recruiting the right kind of guys. Making sure you have the right guys on staff, all the way up and down. That's the biggest thing for us. When we're recruiting guys, the first thing on the list is character." 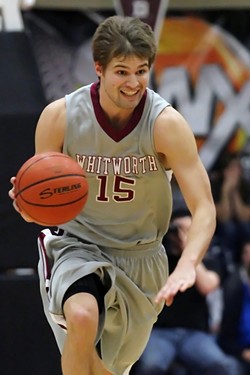 Q uite a few of the people around the program this season are new to Cheney. The seven leading scorers from last season are all gone. Some players followed Legans to Portland. Others like Kim Aiken, who transferred to Arizona, and the Groves brothers, who transferred to Oklahoma after becoming NCAA Tournament sensations in the Eagles' thriller against Kansas, moved to bigger programs at a higher level of the sport.

That's not to say there isn't continuity in Cheney, though, and the level of continuity goes much deeper than just Riley.

"We had about 21 people who traveled with the team for every game — coaches, trainers, players — and most of those guys are coming back. We've got six players, we've got our [operations] guys and our [graduate assistants] coming back. There's enough continuity where the culture is going to stick," Riley says.

However, six players and some staff aren't enough to field a competitive basketball team. So, Riley had to act quickly over the offseason to fill out a complete roster of players and staff. He managed to keep the two freshmen who had committed to play for the program under Legans and then went out and brought in four additional freshmen of his own. On top of that, the Eagles were active in the transfer portal, where they found five players, some from the Division I level and some from junior colleges.

Riley takes over an Eagles program that is arguably in as good shape as it ever has been. Nonetheless, this season could be seen as something of a rebuilding year due to all of the turnover. On the other hand, when handled properly, that presents an opportunity. Thanks in part to the pandemic, as strange as that may seem, taking over this season as opposed to any other gives Riley a head start on the process most first-year head coaches experience. Rule changes allowing transfers to be immediately eligible, as well as giving players an extra year of eligibility due to the pandemic, made the pool of transfer players available to Riley deeper than ever before.

"It goes both ways," Riley says. "We had a really good team that could've come back last year, but at the same time we've taken advantage of the portal and had some good players come in. We've had some freshmen that we think have slipped through the cracks."

While the roster will look considerably different than it did a season ago, the product on the court should be familiar. The program's goal remains the same: Make the NCAA Tournament. The way they will strive to achieve that goal remains the same as well. It's the Riley era at Eastern now, and it's a direct descendent of the Legans and Hayford eras before it.

"Year by year it could change, personnel-wise, but I don't have a ton of experience with other programs. This is what I know, and this is what I know has been successful. That's going to be our identity." ♦