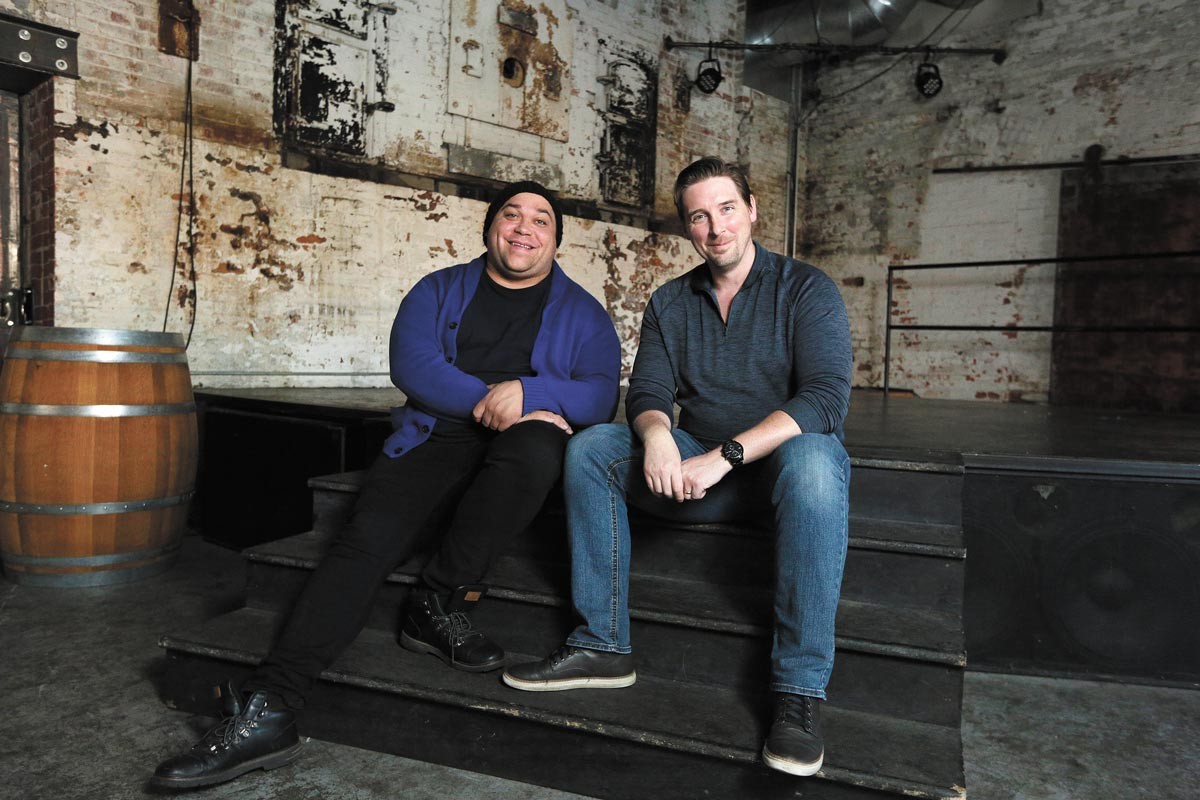 The epiphany came when Scott Doughty was working down at the Seven Devils New Play Foundry in McCall, Idaho. The group was in the middle of a workshop performance of a new play, and up to that point things had been proceeding uneventfully.

"All of a sudden, the playwright, who's at the back of the house, jumps out of their chair and yells, 'I've got it!', stops the workshop performance, runs on stage with a pen and starts just furiously writing in the actors' scripts, looks at them and says, 'This is the new ending to the next scene. And go!'

"You can imagine, none of us knows what's about to happen. Not the actors, not the director. Only the playwright. And the energy in the air was absolutely electric. We went from staging a play to actively creating it in the moment in front of an audience. It was an experience unlike anything else," he says.

That was a pivotal moment for Doughty, who made a conscious decision to concentrate on new work development — which is to say, soliciting and refining original theatrical works before they're presented to paying audiences — from then on. It would also lead to Doughty teaming up with local actor and director Dahveed Bullis to form the Spokane Playwrights Laboratory earlier this year.

"Scott and I had been circling the same area for about 10 years but had just never really worked together," says Bullis. During a virtual planning meeting for a local theater troupe back in early spring, they both realized that they were advancing the same ideas about how to champion the estimated 400 playwrights living in the Spokane area.

"One of the biggest things I said in that moment was that we're doing all these plays and telling people how important they are, and I don't disagree with that, but where are the local playwrights? We get off of that call, and Scott calls me immediately and says, 'Hey, everything you were saying is exactly what I want to be about, which is creating a way to support artists.'"

Spokane Playwrights Laboratory, or SPL, went from a good intention to a fully fledged organization within a matter of weeks. They began incorporating as a nonprofit in time to make the April 1 deadline of the second-round Spokane Arts Grant Awards. By August they'd been awarded $5,000 in SAGA funding. In the meantime, Bullis and Doughty started establishing the partnerships that would give them the ability to hold workshops and raise awareness about the organization among local playwrights.

"It was so nuts," Bullis laughs. "But when it's 100 percent your passion and what you're going for, the work is not even work. Both Scott and I are working full time, and we have toddlers of our own, but this has to be done. So many people will graduate from college in the arts here [in Spokane], and then they're out of here. You need to have places where people can be able to stay local and flourish. That's how the arts becomes an economy driver."

Today, roughly nine months since its inception, SPL has already formed performance or collaborative partnerships with Terrain, Stage Left, Art Spirit Gallery in Coeur d'Alene and the Northwest Playwrights Alliance. It also has at least three plays lined up for workshopping: Tristen Canfield's An Aviary for Birds of Sadness, Joy Wood's In Call and Sandra Hosking's Mad Underground. Canfield's play, which addresses mental health issues, is scheduled for the SPL's first-ever staged reading on Oct. 14.

Despite — or maybe because of — the speed at which things have come together, Doughty stresses the importance of keeping the organization focused on its original goals. There is currently no plan to charge playwrights for its services or to charge audiences to attend workshop performances. However, playwrights, cast and crew members will receive remuneration for their involvement in workshop shows. And the SPL is drawing a hard stop at the point when workshopped plays transition to theatrical productions.

"We are not a theater company," Doughty says. "The focus with theater companies is very much on the audience, and so a lot of their decisions are based on selling tickets and selling subscriptions, and that's based on what they think the audience is going to like. We really try and flip that formula. We are concerned with the playwright and the playwright's work, so we want to stay playwright-centric and playwright focused."

Of course, workshopping is partly done to ensure that the playwright's vision is translating to audiences as intended. That's why real-time, participatory feedback is such an important part of the process.

"When you're coming to see a show at the lab, you're not just an audience member. You're not just going to take in a show and clap and get up and leave. You're seeing a work in development. Yes, you're here to enjoy it, but we need your help and your feedback. This isn't lip service. We really need to know your thoughts — what you enjoyed, what you were confused by," Doughty says.

"The playwright's going to be taking that information, and that's going to have a direct impact on the edits they make and how the script changes before they start submitting it to companies for full production."

In that way, the audience becomes a co-creator of the finished product. Hence the electrifying revelatory magic of workshopping that Doughty identified all those years ago at Seven Devils, and that Spokane Playwrights Laboratory now aims to channel for the benefit of local playwrights.

"What you're seeing in the lab is a real behind-the-scenes portion that often doesn't get thought of," Bullis says. "We all like The Office, but how often do you think of what it was like when they're brainstorming these moments that live on for as long as that TV show remains in the zeitgeist? By coming to an SPL show, you're part of that process now. And how thrilling is that?" ♦