Before the curtain rises on Open, a befitting air of mystery hangs over the production. The synopsis tells us that Crystal Skillman's one-woman play features a narrator known only as The Magician attempting to use the power of illusion to save the life of her unseen partner. But any specifics beyond that are generally left unsaid.

"The piece is very abstract, poetic. It's about a woman's struggle with her inner mind. She has a tendency to escape reality by creating magic shows in her head as she's emotionally trying to come to terms with the problem at hand," says Dawn Taylor Reinhardt, who's directing a new production of Skillman's play for Stage Left.

"I don't want to go into too many details about what her journey is. Because if I do that, what's the point in telling the story?"

That lack of specificity is also integral to the story itself. "Magic is when what we imagine can become real," proclaims Open's narrator in a key line of dialogue. And as if to underscore that point, the show deliberately segues between the real and the imaginary in a nonlinear way. Even the sleights of hand are in question.

"There's nothing real on this stage at all," Reinhardt says. "The magic tricks are all pantomimes. Every single prop is done through imagination. There's the idea of bringing flowers from a hat, and even though you don't really see anything, they're there, right? So we're asking the audience to come and join in the game, to use their own imagination. We're asking them to play along."

Were this live, in-person theater, that participatory aspect might seem perfectly natural. In typical productions of Open, The Magician tends to mingle with the audience, asking individual members to indulge her in, say, picking a make-believe card or identifying the color of a ball she pretends to be juggling. This, however, is one of the last in a series of pre-recorded, limited-run streaming productions that Stage Left embraced during the pandemic. As a result, live theater runs up against the constraints of TV and film.

In her role as The Magician, Chelsea DuVall is well aware of those limitations and is working with Reinhardt to maintain Open's interactive energy even as it streams into living rooms.

"This script has a lot of moments where the actor is inciting the attention of the audience very directly," DuVall says. "There are a lot of tactics within this particular piece that will draw the audience in. There are places that are very presentational, and there's a bit of showmanship — or showwomanship, I should say. And in the parts where that's not as prevalent, it's really up to me to sink in deep and really live it." 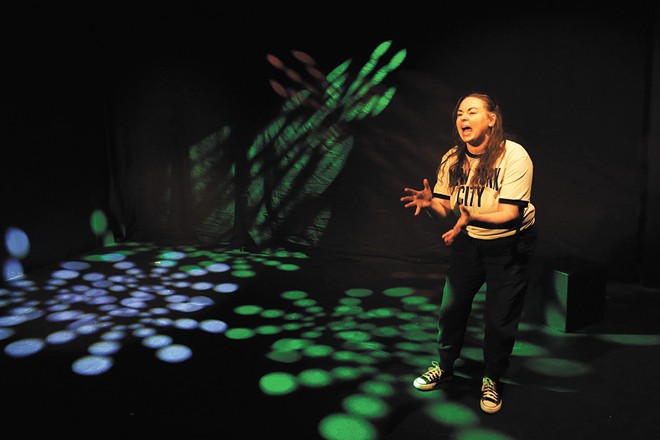 At the same time, the recorded format does ease some of the usual technical challenges of live theater. This particular show calls for more than 100 lighting cues and around 60 sound cues. The possibility of do-overs allows cast and crew to be sure that the timing of each of those cues is spot-on.

Recording with a two-camera setup also creates new possibilities to tell the tale in a certain way. Reinhardt admits that she's a stage director first and foremost, but choosing a specific angle or experimenting with multiple takes allows her to tap into the same creative toolkit as a film director — even if they're still approaching Open as a single seamless piece rather than a collection of individual scenes.

"One of the things I've been telling people that have been asking me about this show is that, as an actor, on a technical level I'm exercising both the techniques needed with live theater and stage performance and film, which is such a rare thing," DuVall adds.

Like Stage Left's production of An Iliad, which is making the leap from a previously pre-recorded performance to a live show, Reinhardt is hopeful that Open will follow the same trajectory so that audiences can experience it in both forms. Whether live or filmed, though, she's of the opinion that it will prompt audiences to "look at their own relationships within their circle, to question their relationships, to understand how strong words are, to be kind, to make some changes in their own existence."

She compares Open to an abstract painting where the interpretation rests largely with the viewer, a sentiment that DuVall echoes.

"It's not heavy-handed. There's some buoyancy, some lightness to it, and yet it's so grounded in humanity, which is remarkable — when you figure out what's going on," DuVall laughs. ♦

The original print version of this article was headlined "Conjuring Act"