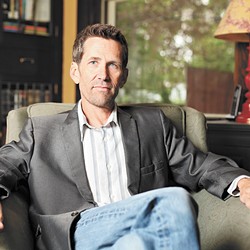 Jess Walter is a No. 1 New York Times best-selling author and a former National Book Award finalist. His seventh novel, The Cold Millions, will be released in 2020.

I remember being young in Spokane and wondering, Who runs this place?

It was, as I wrote in an early novel, "a donut city," with a big hole downtown where the nightlife and culture should be. "Urban development" meant another parking lot. Growth was concentrated on the edges, in the suburbs. Young people in the 1980s and '90s were either fleeing Spokane or, as I wrote then, "dragging around heavy suitcases filled with excuses why they stayed."

Thirty years later, I barely recognize those descriptions. Spokane is a thriving, singular place that makes me irrationally proud to be from here, and proud that I never left — a city of bike lanes and street fairs and art festivals and daring chefs and great neighborhoods, the kind of city that young people are drawn to, that my kids are eager to return to.

But as we prepare to elect a new mayor and city council president, I hear the ghosts of old Spokane rattling their chains again, echoes of reactionary, backward-looking leadership bought and paid for by behind-the-scenes money.

"As we prepare to elect a new mayor and city council president, I hear the ghosts of old Spokane rattling their chains again..."

Back when I wondered who ran Spokane, the mayor was a former TV anchor, but the power lay in stodgy old business and real estate interests whose last good idea was Expo '74, and whose vision of a dynamic city was shopping malls surrounded by ever-expanding suburban cul de sacs.

I guess if you wait long enough everything comes back around.

The stealth campaigns of former TV anchor and mayoral candidate Nadine Woodward and city council presidential candidate Cindy Wendle remind me of those weak-mayor days, when the city elected figureheads and outsourced the real decision-making to the dining room of the Manito Country Club.

While I applaud their desire to get involved, neither Wendle nor Woodward has even served on a civic board. Both have been genially vague about their plans and are conveniently funded by business interests and a political action committee of state realtors spending hundreds of thousands of dollars in Spokane to make sure nothing gets in the way of more four-car garages.

Here's the thing — cities don't succeed and prosper by accident. Current City Council President Ben Stuckart and Councilman Breean Beggs have spent years doing the kind of difficult, on-the-ground policy work that figureheads don't have time or interest in doing. They have helped oversee a city that has balanced growth with environmental responsibility and a commitment to diversity. Their forward-looking policies have helped ignite development downtown and spurred growth and pride in urban neighborhoods like the Perry District, East Sprague and my home for almost 20 years, West Central.

Woodward has fretted that under Stuckart, Spokane might become "another Seattle." It's a head-scratching position for a mayoral candidate, campaigning against becoming like the region's most economically prosperous and culturally dynamic city. Of course, no one wants Seattle's homelessness problem, or its traffic, or any other big-city ills. But worrying about mid-sized Spokane suddenly becoming a metropolis is like Colville fearing that it's becoming too much like Mumbai.

This fear-based line of thinking is aimed at the reverse-mortgage crowd and is eerily reminiscent of the 1980s nice-place-to-raise-a-family Spokane. The subtext: Let's just get back in our sleepy, conservative lane.

This is why I think the mayoral and city council election of 2019 is an especially important one for young people in Spokane, and a good warmup for those who want to stretch their political muscles in anticipation of 2020.

It's been thrilling the last few years to watch young people take the lead on issues like climate change, reproductive rights and gun control. Passionately engaged in solving problems they will face long after the baby boomers have gone on to that big Costco in the sky, 18- to 29-year-old voter turnout jumped from less than 20 percent in the mid-term election of 2014 to 36 percent in 2018, a 79 percent increase, the highest bump of any age group.

In an off-year local election like Spokane is facing next month, you can expect the youth vote to lag even further behind. This is one reason I'm helping to organize a series of events to register and energize young voters (and voters who just feel young) in 2019 and 2020. The first will be Saturday, Oct. 5, at Lucky You Lounge, in support of Ben Stuckart's mayoral campaign.

Of course, young voters, like all voters, are free to wholeheartedly disagree with my choice of candidates and my view of city politics. In fact, I encourage it. Engagement is the important thing, so that when young people look around, they at least feel they've had a voice in deciding who runs this place. ♦

The original print version of this article was headlined "Who Runs This Place?"