Not in My Backyard

A group home for recently released prisoners was kicked out of Westview; here's why that's bad for recidivism

Young Kwak
Garnet Smith was one of seven felons in Open Gate's Westview group home before neighbors pressured them to leave.

Two weeks after they moved in, they were gone.

A day later, on a hot Friday afternoon, Terri Mayer walks through the house at 5803 North Drumheller Street. It's virtually empty now, save for a few bananas in the fridge, clean sheets in the washing machine and various pieces of furniture, stripped bare and wiped clean, throughout each of its seven bedrooms.

Mayer is the executive director of Open Gate, a local nonprofit that provides reentry services — including transitional housing like this facility was two weeks ago — to recently released prisoners. Earlier that week, a flyer circulated around the Westview neighborhood, alerting the residents about the house at 5803 North Drumheller. "Every one of those residents are convicted felons," it read in bold, black letters. "Hopefully you are as concerned as we are."

The story spread across local TV news. Neighbors said they had been blindsided by a recent influx of felons, living blocks away from Westview Elementary School, threatening their children's safety and deflating home values. They came together at Shadle Park on a Wednesday evening in protest. Mayer stood before a crowd of more than 100 people beneath a gazebo. She could hardly get a word out over the heckling:

"What about our property values? ... Would you want them in your neighborhood? ... They deserve nothing! They're criminals!"

A couple of the house's residents told Mayer they had been followed, and at that point, she was worried about their safety. So they backed down. In her office downtown, Mayer shakes her head and blinks back tears.

"It was unbelievable. It broke my heart," Mayer says. "It's unfortunate that people get branded with a felony, and it's kind of like a lifetime sentence for them, and it shouldn't be."

Mayer and her son started Open Gate in 2010. Her son, an inmate at Airway Heights Corrections Center, was sentenced to 15 years for first-degree manslaughter after accidentally shooting one of his best friends, Mayer says. He's set to be released this month. For more than a decade, Mayer and her son watched men leave prison only to return later.

"[When they're released,] they have nothing. They're basically just given $40, a bus pass to Spokane and told, 'Figure it out,'" Mayer says. "They don't have anyplace to go for the most part."

That's where Open Gate comes in. Mayer works with the prisons to create release plans for her clients. She helps them apply for food stamps and Social Security. On the day of their release, Open Gate volunteers pick them up from Airway Heights or a bus stop and immediately drive them to a Department of Social and Health Services office for their benefits.

The men are given a change of clothes and a bag of toiletries. They check in with their probation officers. They're issued a new ID. And that's all in a single day's work, Mayer says. At the Open Gate headquarters, downtown on Howard, Mayer helps her clients apply for jobs and improve their résumés. She teaches classes in money management and moral recognition therapy.

Open Gate currently serves 12 clients from all over the state and operates one group home in the West Central area. The rules for the men living in Open Gate's transitional housing are strict: They have a 10 pm curfew. They have to sign in and out whenever they leave. Guests aren't allowed in their bedrooms. Drugs and alcohol are forbidden. Smoking indoors is banned. Most of the men who lost their Drumheller home have moved there. "It's been kind of tight quarters for them," she says. 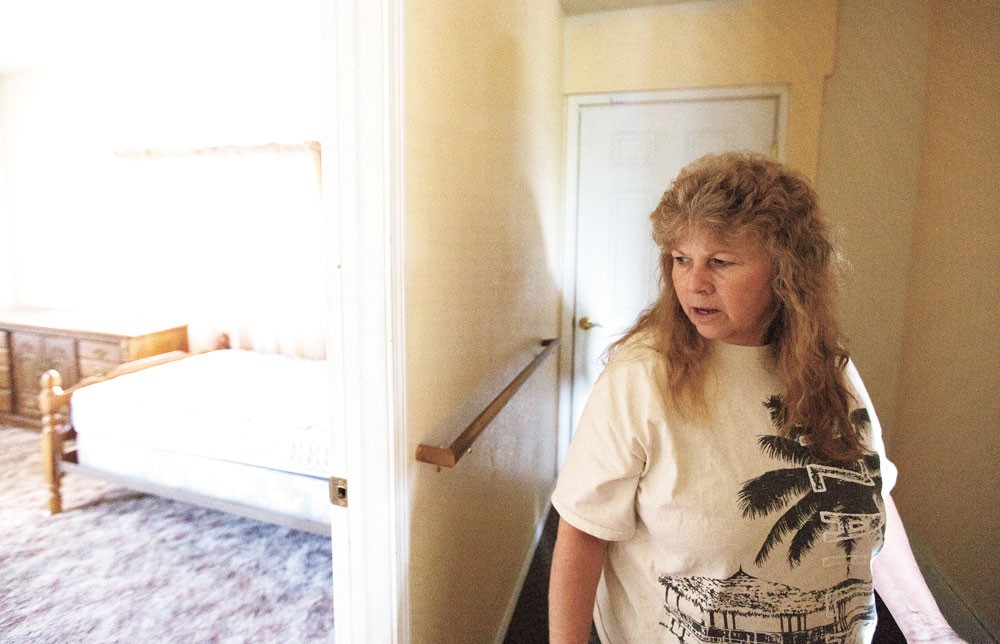 Research suggests that reentry services — like those provided by Open Gate — that support ex-prisoners as they reintegrate into society help curb recidivism and improve public safety. Open Gate has served more than 500 ex-offenders, and to Mayer's knowledge only three have gone back to prison on a new charge.

"A lot of the guys would go back [to prison] because they would get out [and] they were not accepted into society here. They kept getting a 'no' on a job, a 'no' on a house. They had no place to go, nothing." Mayer says. "Why wouldn't they commit a new charge to go back?"

But felon discrimination presents a significant barrier for the nearly 65 million Americans who have an arrest or conviction record. Ex-offenders are routinely denied jobs and housing based on their criminal history. Or, in the case of the seven men who were living on North Drumheller, pressured out of neighborhoods.

"That's a shame," says Julie Schaffer, an attorney at the Center for Justice. "When [recently released prisoners] come out of those programs, the community doesn't seem to trust that they work. ... [Prisoners] come out eventually, and we have to give them an opportunity to have a second chance, or we're going to continue to cycle them through the criminal justice system."

Garnet Smith was one of those seven convicted felons living at 5803 North Drumheller. That Friday, he helps Mayer clean out the house. All that's left in his old room are floral curtains and a chestnut nightstand. Smith doesn't see himself as a "criminal." He's never done or dealt drugs. He's never robbed or assaulted anyone. He's never even gotten a speeding ticket. And he's always had a stable job — less than a month after his release from Airway Heights Corrections Center, he's already working as a landscaper. But in 2010 and earlier in 2005, while he was living in Seattle, Smith, 32, violated a no-contact order with a former girlfriend. ("Love makes you crazy," he says.)

He remembers walking to and from the bus stop every day, watching the blinds quiver on the houses down his street "like a peep show." Although he's moved into permanent housing with help from Goodwill's veterans program, he's still a little bitter about leaving the group home.

"I felt like, 'Are you serious?' We're not doing anything to you. We're not bothering you. We never approach anyone in the neighborhood," Smith says. "We never have loud music. We definitely don't have parties here, so I don't see what was so offensive about us being here."

Mayer had big plans for this house: A community garden in the backyard, a workout room in the basement, a space where residents could earn a little extra cash upholstering old furniture for resale.

Editor's note: Quotations in this story have been modified from previous versions to clarify meaning.