Fledgling designers are working to put a price tag on local fashion, but they wonder if Spokane is ready to pay up. 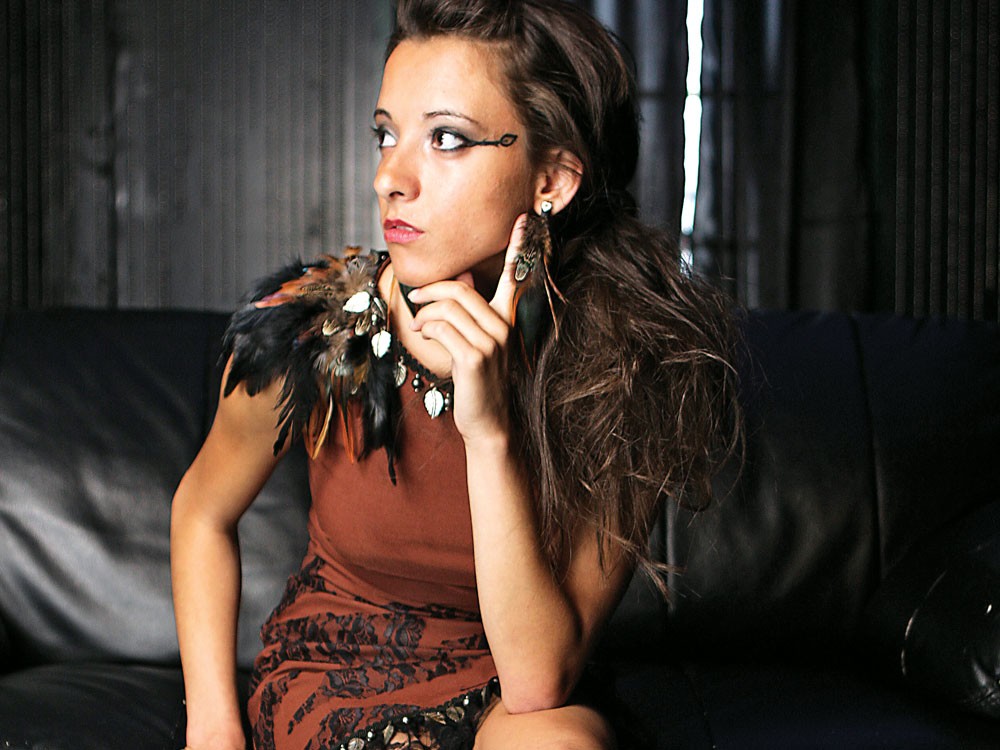 Pink taffeta hangs thick as cotton candy. The material on a zebra print dress squeaks like someone has sat on a plastic couch cover. A bottle of Budweiser is the only thing keeping a ball gown off the plywood floor.

“I want it for my disco Barbie party,” a tall blond in a satin retro mini dress says. She moves her hands along the curve of the neck and twirls around to see how short the dress she’s wearing truly is. “Oh my God, I heart this. A lot.”

Inside Stage 54, a venue space attached to the Top o’ China buffet, there’s an unusual combination of suicide girls and platinum blondes complaining about their bust sizes, child-birthing hips and overestimated rib cages. Half-dressed models in half-finished clothing are strutting across space usually reserved for the mosh pit. Were it not for the metal band warming up in the background, the entire affair would seem less like a fitting than a peep show.

But Ronnie Ryno hardly notices. She can’t keep her hands off the goods. She approaches one model as though she would a mannequin. Ryno fingers the garment’s sleeves, pinches at the waist and, with the flutter of the wrist, deems it too large. She pulls a pincushion out of her purse and, within moments, what was once a man’s dress shirt is pinned and fitted to become a dress.

Ryno is a clothing designer and the director of the Runway Renegades Alternative Fashion Show — and she’ll be damned if you call Spokane anything but stylish. “Spokane has an underground fashion scene that’s being carried by younger generations,” she says. “There was a time when the city was very conservative and closed to new ideas, but the trends are changing. People in Spokane seem more free and daring to express themselves.”

If you’re having difficulty wrapping your mind around the phrase “Spokane fashion scene,” you’re not alone. Local designers exist, but until recently, they hadn’t found a home outside their sewing machines. This subculture of designers is growing, but there are obstacles. You’ve probably never seen their work in a store, though figuring out just why is more difficult than you’d expect.

Runway Renegades was born of necessity. In 2007, Ryno and four other women were making clothes and needed a venue to tout their wares: Designers need exposure and clothes need display windows. The problem then — and today — is that, according to the women, local boutiques only carry the safe stuff. That means lines from national clothing houses and locally made purses, scarves and jewelry.

“Boutiques rely on big factory houses to design and produce cheap garments,” Ryno says. “[Stores] have overhead costs, I get that. But marking my clothing up by an additional 30 percent means there’s a chance it won’t sell. Do I have to cut my prices and take a loss of time and money just to get my clothing out there?”

The designers had no place to show their wares. So they created one.

Right now, the only places Ryno sells her clothes are online and at two boutiques outside Spokane. She feels like she and the other renegades are in step with national trends, but that Spokane itself is slow to keep pace. “People are starting to appreciate handmade items,” Ryno says. “It’s like they want to move away from mass production, but not many boutiques [locally] provide that.”

But it’s not as though our local boutiques are getting rich, says Jodi Hosfman, owner of Serendipity Boutique in downtown Spokane. “I don’t want to put any negativity into the scene, but it’s just hard to sell.”

Hosftman moved her store from Liberty Lake to Spokane just eight months ago. While there, she collaborated with a local designer, but the line fell flat. The pieces were too expensive and the customers uninterested, so Serendipity closed its doors to apparel consignment.

“Spokane has a fashion scene. But as a whole, Spokane is a bit conservative and the local designers I had were a perhaps a bit too trendy,” Hosfman says.

Name: Shawna Gaines
Age: 25
Years Designing: Started designing Barbie clothes at age 5. Has designed locally for 12 years.
Source of Inspiration: “My husband is a glass artist, so I get to see glass sculptures and really awesome pieces of artwork. I like putting some of those aspects into my clothing.”

Name: Lexi Carr
Age: 18
Years Designing: Has designed locally for four to five years.
Source of Inspiration: “My style is pretty eclectic. I’m inspired by a lot of different things like the Victorian era, or the scene — punk, thrash music — that I listen to.”

Name: Kadra Evans
Age: 28
Years Designing: First year designing clothing.
Source of Inspiration: “The music that I listen to has really changed in the last couple of years. I was a really big radio listener but now I’ve gone to my first concert and have really started to connect with the music.”

Name: Ronnie Ryno
Age: “Do I really have to tell? I usually lie, but I’m actually 37.”
Years Designing: Has designed locally for three years.
Source of Inspiration: “I find inspiration everywhere. I’m inspired by people walking down the street, movies, magazines, crazy prints, patterns, texture and music. I love making something new and modern out of vintage fabrics and garments. Up-cycling is such a rewarding challenge.”

Name: Danielle M. Hansen
Age: 14
Years Designing: First year designing clothing.
Source of Inspiration: “I have always been interested in clothing design, but my real source of inspiration is my family. My mom is an interior decorator and my cousins have been interested in the art of fashion.”

Still, more and more boutiques are popping up in a downtown that’s working hard to revitalize itself, Hosfman says, and foot traffic is increasing.

“I think people are looking for unique items, and there’s a reason boutiques are lasting even in the recession,” she adds. “I do believe there is a market for local designers — it just has to be with the right clientele. There is a tremendous room for growth in Spokane and I think it’s happening now.”

The biggest growth happening at the Runway Renegades Fashion Show fitting is the height of a bleached-blonde’s shoulder pads. Stepping out in a sparkly tutu gown covered in silver sequins, she looks like a cross between Lady Gaga and Tina Turner in Thunderdome. Beside her stands a tall brunette in a man’s shirt with a silhouette of Bob Marley painted on the back.

In her own line of clothing, designer Kadra Evans, 28, has removed most of the frill and glam associated with fashion. She’s stripped her line, Assassin Apparel, down to nothing but a few men’s dress shirts. Everything is “up-cycled” from Value Village before being customized with fabric paint.

“My clothes are a mix between music, fashion and art,” she says. “I’ve taken the men’s shirts, fitted them to women and painted album covers on them.”

And indeed, album covers from the likes of the Alkaline Trio, The Academy Is… and Halifax grace the tailbones and rib cages of her designs. The first-year designer says she’s surprised the collection has already gotten a significant amount of attention. “One of my friends wore The Academy Is… shirt to The Riff, and people started asking questions,” Evans says. “I never thought of selling them, but people kept trying to place orders. We’ll see what happens after the show.”

Each clothing collection speaks for itself, but this year an overarching theme has guided the designs. Each of the five collections has been made from recycled materials. It’s a trend called up-cycling — the thrashing and refashioning of thrift-store or vintage materials and objects to create an entirely new design.

“One of my dresses is made out of a bed skirt, tablecloth and a shower curtain,” Ryno says. “Now it looks like a cupcake, all pink and frilly.”

Sustainable, eco-friendly designs have found a following in the fashion world, especially in cities where the punk do-it-yourself mindset has a strong following. Spokane’s trendier sister, Portland, has an entire fashion week, including a handful of Junk to Funk recycled fashion shows.

“Every American puts at least 30 pounds per person of fabrics or textiles in the trash each year,” Ryno says. “Recycling material is really the direction that a lot of designers are taking.”

The 37-year-old special education teacher found clothes as a means to escape from her workaday life. “Working with kids who are really damaged sucked the life out of me,” says Ryno, wearing a black shirt, secretary glasses and stripped bell-bottoms that could have been picked off the floor of Led Zeppelin’s tour bus. “I got so caught up in these tragic stories that designing sort of saved my sanity. I needed something frivolous.”

She adds, “If the dress doesn’t fit, nobody’s going to die.”

Ryno hasn’t turned back since she began making clothes three years ago. Her Glamarita clothing line is drowning in sparkles, tutus, ruffles and lace, while still managing to have a masculine quality. Both Cher and Kabbalah-era Madonna could find refuge in her one-of-a kind pieces.

“I love taking things that seem conflicting and making them work together,” she says. “Like combining something sweet and girly with something tough and masculine.”

Seven blocks west of Serenity, a different boutique is dabbling in local consignment. On certain First Fridays, when the art galleries open, the Tangerine boutique is known to provide an open-trunk show for local designers.

“We want people to show something funky and unique that expresses the designer and the store,” says owner Patricia Sampson. “We’re always looking for designers, but it’s harder than you think to get them. And that seems strange to me.”

Despite the financial obstacles of cost versus demand versus production — it takes a hell of a lot more time and money for one woman to make a handmade dress than it does Calvin Klein to make 20 — Sampson also believes the Spokane market is ready to take a risk with local apparel. Last week, she met with a local skirt-maker to discuss consignment options.

“When we first opened two years ago, we tried to introduce funky, unique stuff, and it wasn’t well-received,” Sampson says. “Customers have got to trust you first. It’s all about the right fit, the right funk. You have to be careful and appeal to a more artsy, urban clientele.”

Since its formation in 2007, Runway Renegades designers have begun to think of themselves as something of a fashion collective, and their events have more than doubled in size. It’s not hard to imagine that when the design and the sales side of the fashion scene in Spokane finally start talking, it’ll be at one of their fashion shows.