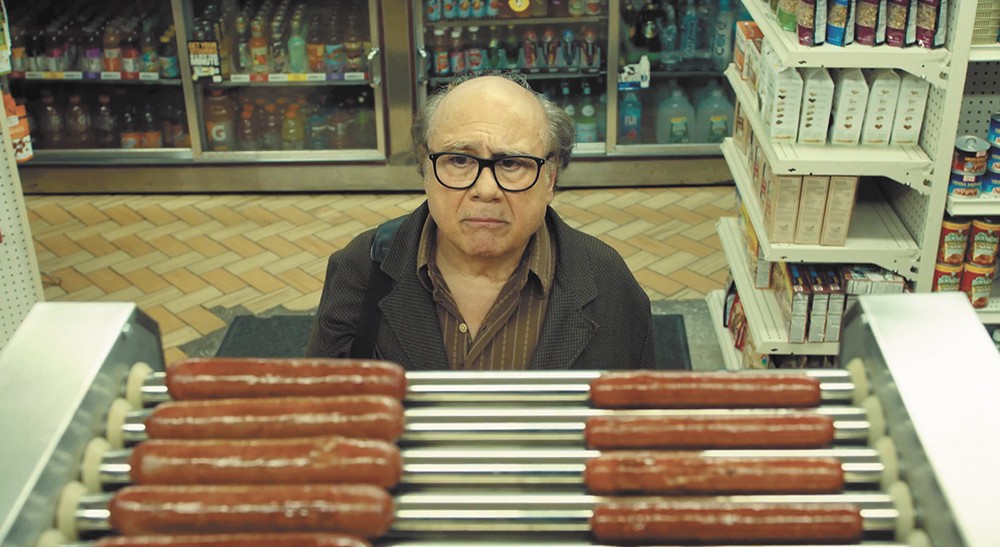 Danny DeVito contemplates his floundering screenwriting career, and a bite.

Call him a provocateur of the banal, a contrarian to the expected:

Todd Solondz may be the original Peck's bad boy of American independent cinema, an uncompromising filmmaker with a perverse gift for going against the grain.

In his eighth feature-length film, Wiener-Dog, happiness is not necessarily a warm puppy. Tracing the ownership of the titular female dachshund in four vignettes (the first two episodes are connected, while the last two are seemingly happenstance), the movie rarely focuses on the relationship between man and beast, refusing to sentimentalize the bond between the enigmatic sausage hound, invariably named something like "Doody" or "Cancer" (see what I mean?) and her parade of dysfunctional masters.

Starting with a gullible little boy (Keaton Nigel Cooke) who has recently completed chemotherapy (and cheated death) and ending with a lonely old woman (Ellen Burstyn) knocking on death's door, the dog's bookend owners represent the age of man, with a twentysomething version of Solondz's most memorable film character, the aptly named Dawn Wiener (Greta Gerwig) from Welcome to the Dollhouse, and a film school instructor/screenwriter (Danny DeVito) floundering in middle age sandwiched in between.

While undeniably cute, the elongated pooch here is just canine window dressing, with no discernible personality to speak of. She's only an excuse for the filmmaker to further explore a familiar world in which people can be all bark and more bite. Anyone expecting anything else will be disappointed.

So, is Solondz a misanthrope? On the face of Wiener-Dog, no. The episode in which Dawn W. reunites by chance with her old junior high school tormentor, Brandon McCarthy (Kieran Culkin), and accompanies him on a trip to visit his brother in Ohio displays a sweet optimism that's refreshing in the filmmaker's oeuvre, continuing the Dollhouse narrative years later with new actors and a great affection for those outwardly mismatched characters. (No worries: There's still a trenchant vibe beneath the surface.) But don't think he's softening too much.

For example, he depicts poor Wiener-Dog's explosive diarrhea unflinchingly (lesson learned: don't feed your pet a granola bar) and concludes the final story of the quartet with a gratuitously upsetting ending that's bound to enrage sensitive animal lovers. (You've been forewarned.) In the end, trying to compartmentalize this movie in some neat fashion is folly. This is Todd Solondz, and refreshingly enough, you can't teach an old dog new tricks. ♦

Wiener-Dog is not showing in any theaters in the area.