Once More with Feeling

The Civic might take a cue from the lesson of its own Thoroughly Modern Millie. 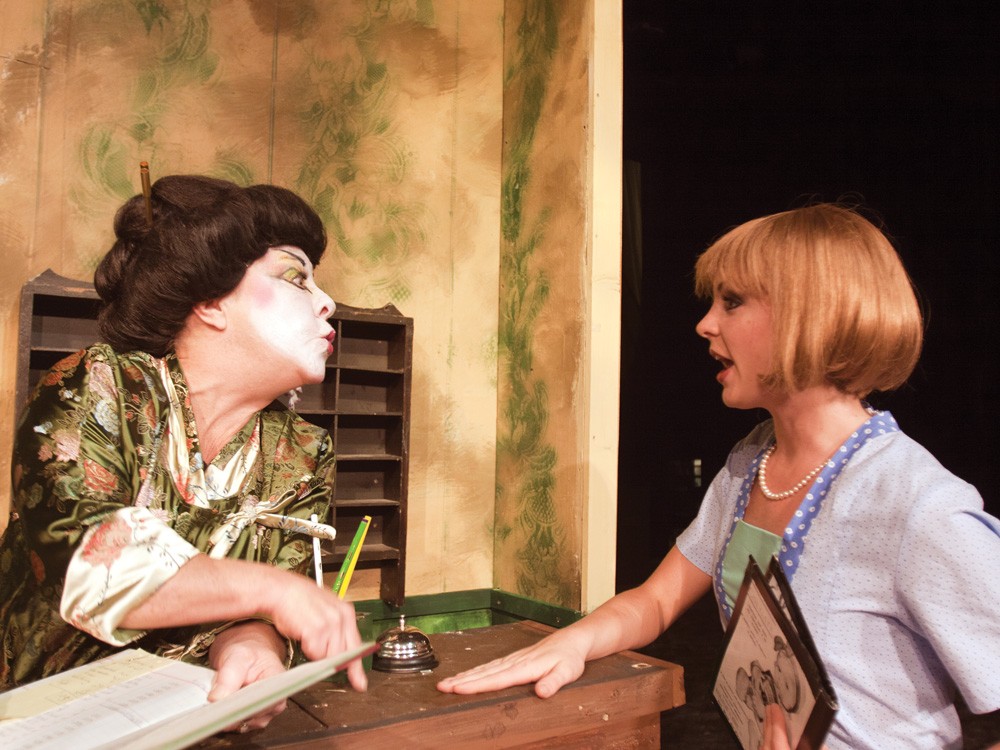 It's 1922, and ingenue Millie Dillmount (Ashley D’Lyn Cooper), lured by the glitz and possibility of Jazz-Age New York City, has ventured there in search of improving her lot.

But rather than climb the ladder of success among the newly liberated, post-suffrage workforce, she aims to take a more traditional elevator to the penthouse suite — courtesy of a rich boss. But here’s the catch: Millie has yet to meet this man.

He will eventually materialize as Trevor Graydon (Mark Pleasant), but the charms of playboy Jimmy Smith (Jeremy Trigsted) will threaten any potential romantic rivalry.

Meanwhile, at Hotel Priscilla (where Millie and other aspiring young ladies are staying), proprietress and washed-up actress Mrs. Meers (Kathie Doyle-Lipe, who also directs) is dressed in the Asian equivalent of blackface. She’s secretly running an operation whereby she shanghais naifs into a life of geisha-like slavery. Her crosshairs have fallen on the new arrival, Miss Dorothy Brown (Alyssa Day), whose fresh-faced innocence is amusingly saccharine.

That’s the rough plot, and Thoroughly Modern Millie devotes about as much time to its development as it took you to read it. Drama in these 20 scenes is largely an afterthought, a few lines of dialogue to pad out the song-and-dance numbers that are now saddled with opera-like expository duties.

About those songs: They’re forgettable save for two numbers, one of which was borrowed from the Van Heusen/Cahn book of the 1967 original film of Millie, the other of which was adapted from Gilbert and Sullivan. The writers’ initial failure to cut the dull, superfluous “Gimme, Gimme” from the second act characterizes everything that went wrong with Millie when it was reanimated as a musical in 2002.

The dance numbers are a different story, though. Doyle-Lipe and choreographer Greg Pschirrer have assembled some dazzling routines. Stenographers seated in desks glide and swirl throughout the office. Dozens of limbs pound in rhythmic unison during several tap sequences.

But those invigorating dance routines only serve to highlight how underserved the cast and crew of the Civic are by such a feeble musical. You have to pinch yourself to be reminded that these actors are off-Broadway, let alone all-volunteer.

D’Lyn Cooper, as Millie, is downright magnetic, her bubbly charisma a tractor beam as she moves about the stage in a bob haircut and sequined flapper dress. Doyle-Lipe, despite having been hoarse on opening night, draws repeated belly laughs by playing her 4’10” height as a colossal comedic presence.

She’s matched by Pleasant, the runaway funny man of Lake City Playhouse’s recent staging of Dearly Departed. He saves the overlong second act by uncorking the cartoonish schmaltz as he falls for Day’s demure and guileless Brown. Unfortunately, his command of the stage has the effect of making Trigsted, as Smith, seem muted by comparison.

Tucked away in the below-stage proscenium, newly appointed musical director Ben Bentler made his own presence felt. The orchestra under his direction sounded robust, vibrant, and the lighthearted vaudevillian gags — like the angelic harp flourishes that accompanied Miss Dorothy’s curtsies — were well-played.

The real shame is that this talent has to fight to transcend such a frivolous production — one that is at odds with itself to the point of hypocrisy. Millie doesn’t practice what it preaches to its protagonist — that the challenge associated with something meaningful and lasting is more rewarding than the quick fix.

Instead, Thoroughly Modern Millie rushes headlong toward the most hackneyed and tidiest of outcomes, too timid to defy the sorts of conventions it would have Millie Dillmount flout. For such a thoroughly modern musical, it is thoroughly un-modern in its lazy recycling of Chinese stereotypes and fairy-tale endings. “Feel-good” need not be synonymous with “brain-dead.”

Event: Thoroughly Modern Millie At the Civic through Oct. 23