I couldn't tell how many men came into the room.

I couldn't see their faces in the damp concrete box — a basement bedroom that was not my own — or hear their footsteps trespass over dirty piles of laundry.
click to enlarge 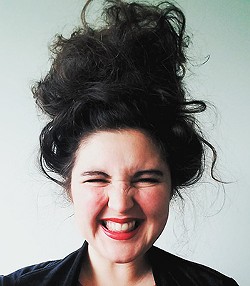 Jordy, a former Inlander staffer, is a writer living in Portland with her two cats. She finds it laughable and terrifying that people pay her to tell her stories of blood and guts.

My boyfriend came home on leave from the Marines, so I left my dorm room, the entirety of my 19-year-old world, to meet him at a house party. But we didn't party. His blue eyes flashed red as he drank too much Jagermeister and punched the walls. He didn't stop when his hand broke, when we heard it snap, or when his two best friends tried to wrestle him to the ground.

When he finally wore himself out, I coaxed him to sleep as we climbed into a stranger's twin-sized bed. I propped him on his side against the wall for fear he might vomit and drown, and I laid on the outside to become a barrier to the world that was hurting him so much. But the barrier broke. This time it snapped me.

Men came one by one into the room and ripped at my clothes, my breasts and hair. They forced themselves into my mouth until I could quietly get them to leave. They came one by one, as though they were waiting in a line. Waiting for this opportunity.

I didn't move or cry out or fight for fear that my boyfriend would wake up. I knew that he would kill them. The men knew I wouldn't let that happen. ♦