One-Upping at the Crest

Smite supercilious snobs while drinking wine and taking in the symphony 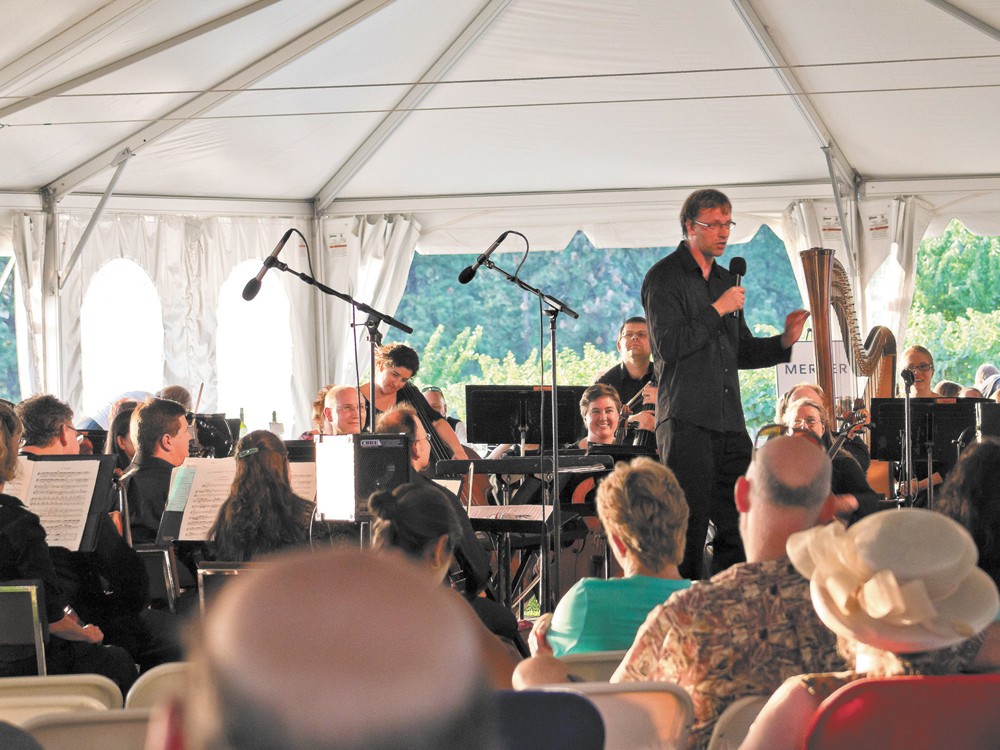 Spokane Symphony music director Eckart Preu addresses the audience at last year’s Soiree on the Edge.
My friend Masterson has invited us to a concert next week. It’s at that winery — Arbor Crest Wine Cellars — you know the one, up on the bluff, overlooking Spokane Valley? We’ll spread our blankets, take in the view, nibble on cheese, sip our wine. It’d all be a midsummer night’s dreamy fun, what with the classical sounds wafting o’er the breeze and the slight buzz I always get from the chardonnay ... except for Masterson himself, who’s always yammering on, regaling us with anecdotes drawn from his vast fund of classical-music knowledge.

First up next Wednesday night is Chen Yi’s Qi. Masterson, no doubt, will repeat the line about Chen’s being “the best-known female Asian composer of contemporary classical music.” True enough. But then, with bits of potato salad dangling from his chin, he’ll start droning on about the dissonance and atonality in her music. To which, really, somebody (like me) should say, “Oh, pshaw.” Qi features four musicians — on piano, cello, flute and percussion — playing for just 10 minutes, and it’s plenty accessible. EWU’s Kendall Feeney is gonna rock the piano part.

Arvo Part’s Fratres will be performed next. (If you’re into sacred music composed by Estonians, Part is your guy.) Masterson will blather on about the multiple versions of Fratres, about how it was on the soundtrack of There Will Be Blood. But I’ll mention how we’re going to hear a completely different version, the one for string orchestra. And Masterson will be left glowering.

I’m told that Spokane’s music director, Eckart Preu, recently asked composer Jennifer Higdon — she of the Pulitzer Prize and numerous composition-judging gigs — for a list of young composers on the rise. The name of Zhou Tian, a 31-year-old Chinese-American who teaches at Colgate University, came up. Yes, yes, Masterson, Zhou’s Pictures “exemplifies a modernistic idiom” — but Eckart programmed Pictures because it “isn’t like all that very brainy music that no one wants to hear.” Take that, Mr. Very Brainy Masterson.

Next our pompous friend will start contrasting the Karl Bohm and Thomas Beecham recordings of Schubert’s fifth symphony. But just listen to the skipping little five-note tune that opens the Fifth and tell me that Schubert’s music isn’t transparent, light and playful. (Maybe we could attend the Arbor Crest concerts on the following two Wednesdays and leave Masterson behind?)

Finally — right around when I finish my third glass of the vino and start gazing dreamily at the view beneath my flip-flops — Eckart will conduct a piece for string orchestra by George Frideric Handel. Masterson will inform us, ostentatiously, about how the melody in this concerto grosso gets tossed from violins to cello to oboe and back again. But I will steal his thunder. Is Masterson aware, I will ask — all eyes turning to me — that poor schoolboy Handel, stuck with anti-musical parents, had to sneak upstairs to practice on a clavichord (you know, like that electronic keyboard that Stevie Wonder plays)? And is he aware that next Saturday — celebrated in Lutheran, Methodist and Episcopal churches everywhere — is Handel’s own feast day?

Masterson will be spitting up his Sangiovese. And the rest of us will be left, contentedly, to enjoy the music.