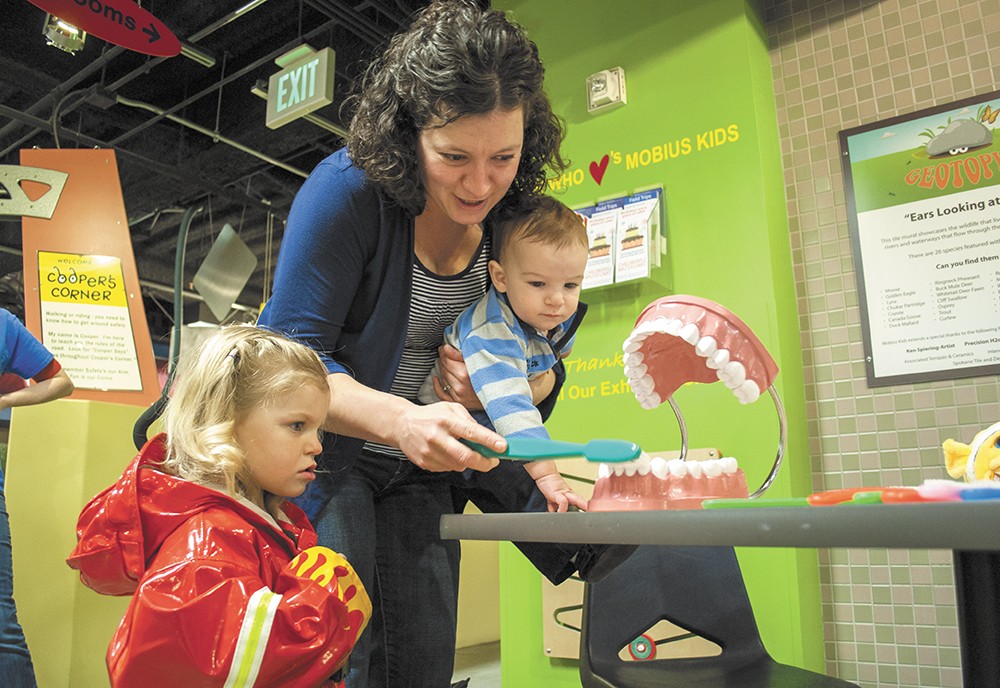 Sarah Wurtz
Jami Cary and her kids Rose and Justin work on toothbrushing at Mobius.

At the Denny Murphy Clinic,

operated by the Community Health Association of Spokane, receptionists call out the names of people sitting in the packed waiting room whose one common feature is their pensive expressions. As their names are called, they rise from their chairs and are ushered into the dental clinic, where staff do something that seems to have nothing to do with teeth: they take the patient's blood pressure.

The clinic sets aside a certain number of appointment slots just for pregnant women and routinely sees people who need to have a dental exam before they can get a hip replacement.

All of these features of this clinic may seem unrelated to dentistry, and until recently would have been unheard of at a dental clinic.

Since ancient times, dentistry has been a profession concerned almost exclusively with teeth — with its own schools, professional associations and regulations, all combining to reinforce the pervasive assumption that oral health is distinct from overall health and wellness. But that is changing.

Window to your health

"When I went to medical school, we didn't talk a whole lot about the mouth," says William Lockwood, chief clinical officer for the Community Health Association of Spokane.

Now, he says, research is showing that separating the mouth from the rest of the body doesn't make a lot of sense.

The biggest concern is periodontal disease, an inflammation of the gums that's often caused by a basic lack of attention to one's teeth. Periodontal disease has long been linked to heart disease, stroke and cardiovascular disease.

But new research is pointing to a nasty association between diabetes and poor oral health. A vicious cycle can be set up when dental infections allow the release of bacteria and inflammatory cytokines into the bloodstream. Those substances increase insulin resistance in the body, worsening diabetes, or even provoking the development of diabetes in those already at risk.

"Your mouth is sort of a window into the health of the rest of your body," says Mary Young, executive director of the Institute for Oral Health, a Seattle-based organization that conducts research on dental health. Research has implicated poor oral health in the development of pancreatic cancer, and the condition of your gums and mouth may also reveal signs of serious illness, such as leukemia, that may be first noticed by your dentist.

More superficially, "Your smile is really your first hello," Young says. "And you can tell a lot about someone's health and socioeconomic status if they don't have a smile."

On a rainy Saturday morning, kids' music jingles softly in the background at Mobius Children's Museum in downtown Spokane as staff put finishing touches on this morning's special activities aimed at teaching kids and their parents about dental care.

While a Tooth Fairy flits about in a sparkly gown and wand, a big replica of the mouth is readied to provide lessons in toothbrushing, in this case with a giant brush. A chart shows parents the surprising amounts of sugar lurking in food geared toward kids — a peanut-butter-and-jelly sandwich checks in at 13 grams. 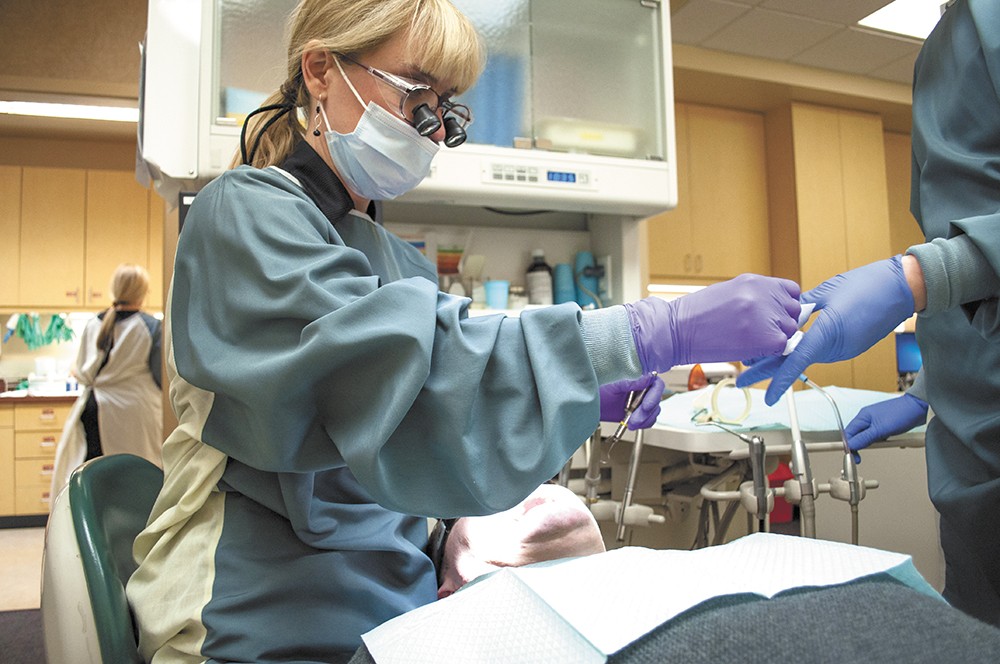 The event is part of the Mighty Mouth, a public service campaign by the Washington Dental Service Foundation with the message, "You are not fit if your mouth is not fit." The campaign seeks to "put the mouth back into the body and stop the artificial separation of oral health from overall health."

Foundation Deputy Director Diane Oakes says that Washington state is "pretty good" compared to the rest of the country when it comes to dental health. Still, a recent survey showed just 19 percent of respondents reported that their doctors had talked to them about the importance of oral health. Spokane, in particular, faces challenges. Drinking water in the county is not fluoridated, and a survey conducted for the Mighty Mouth campaign found that 58 percent of Spokanites have dental benefits, compared to 68 percent statewide.

That can lead to fewer people receiving dental care. Even people who have insurance, though, sometimes may be reluctant to seek help. For them, Oakes says dentists are trying harder than ever to create pleasant office experiences. "Going to the dentist today is not like it was 20 years ago," she says, adding, "The longer you wait, the worse it's going to get."

Putting it all together

The future of integrating dentistry and traditional health care may be one-stop clinics, where dentists and doctors treat their mutual patients seamlessly. One pioneer in this approach is Minnesota-based HealthPartners. Dental Director David Gesko says he's used to getting strange looks when he asks patients who've come in for teeth cleaning about their diabetes. "I love it when the light bulb goes on and they see I'm not trying to be meddling."

HealthPartners offers insurance as well as providing a full range of health care services under one umbrella — where a dentist can just walk down the hall to connect a patient with a physician.

Under this arrangement, Gesko says, patients are in a better position to thrive. For instance, research makes it clear that a healthy mouth will help diabetics manage their condition, so HealthPartners provides diabetic patients with additional teeth cleanings each year. HealthPartners dentists can also easily access patients' medical records, noting conditions that might affect oral health. Some medications, for example, may cause dry mouth, which makes teeth more susceptible to developing cavities.

Locally, CHAS has taken a similar approach, operating 11 clinics that have both medical and dental facilities.

Says Lockwood, CHAS' chief financial officer: "We are addressing the the global issues that might affect their health."

Whether they avoid dentists because of fear or lack of insurance, a surprising number of people defer dentistry to such an extent that they land in the emergency room. A 2014 study in The Journal of the American Dental Association showed that between 2008 and 2010, there were more than 4 million emergency room visits in the United States for dental-related conditions, costing $2.7 billion. In Washington state, dental pain was the number one reason that uninsured adults visited the ER, resulting in costs of more than $36 million over an 18-month period, according to 2011 numbers from the Washington State Hospital Association.

Those statistics should be improving for those who lacked dental care because of the cost.

Washington state signed on to the Affordable Care Act's expansion of Medicaid. Under the law, states can choose not to cover dental, but Washington's Medicaid program, called Apple Health, does cover many services for adults, including exams, cleaning, fillings, extractions, fluoride varnish, and even dentures. Additional services are covered for children under 20, even including orthodontics, in some cases.