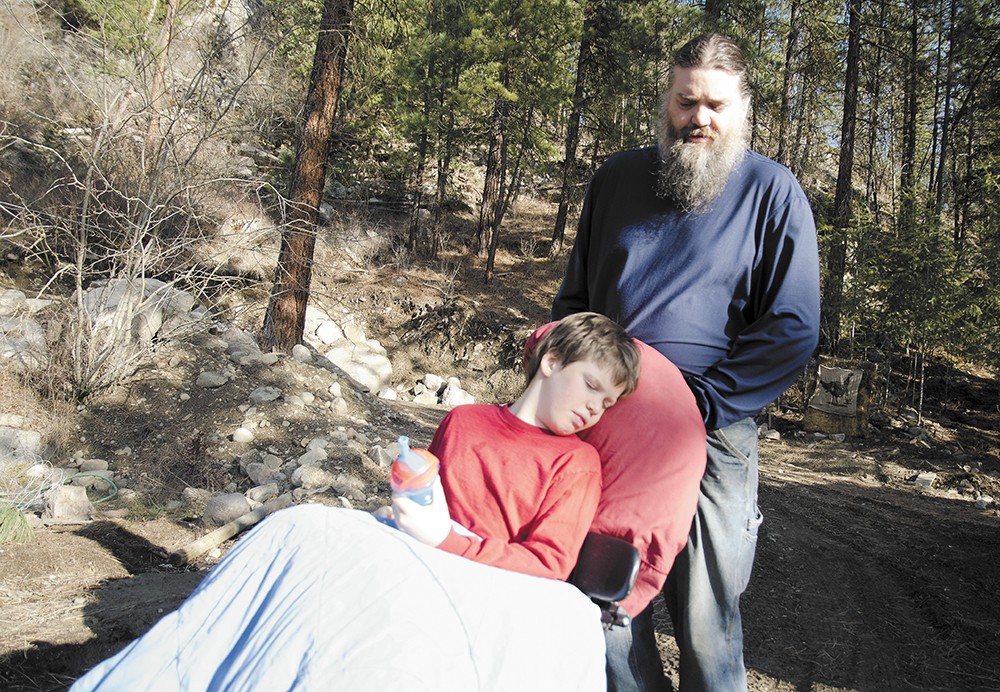 Jacob Jones
Bobby Kalua wheels his son, Koa, through the woods near their home outside Colville. While Koa often walks by himself, the chair sometimes allows for better control or mobility.

Perched in his wheelchair with a blanket over his lap, 10-year-old Koa Kalua rocks in his seat, his arms outstretched to his mother as she offers him a sippy cup of water. Clutching the cup, the brown-haired boy moans in thanks and smiles broadly, his jaw and neck straining around the expression. He then turns quiet, more relaxed as he begins to drink.

"This is Koa," his mother Kim Kalua says. "Today's a really good day for him. He's relatively calm and happy."

Koa has suffered from Doose Syndrome, a severe and medication-resistant form of epilepsy, since age 2. Plagued by violent seizures and developmental delays, he struggles to communicate and control his motor functions. On bad days, he screams for hours and wears a diaper. He may need to be strapped into his chair.

At first, doctors tried to treat Koa with traditional anti-seizure drugs, which his parents say only made things worse. Seizures skyrocketed from a few a week to more than 100 a day. After several months of failed drug combinations, Kim and her husband Bobby decided the side effects were too dangerous. They took him off the medication. 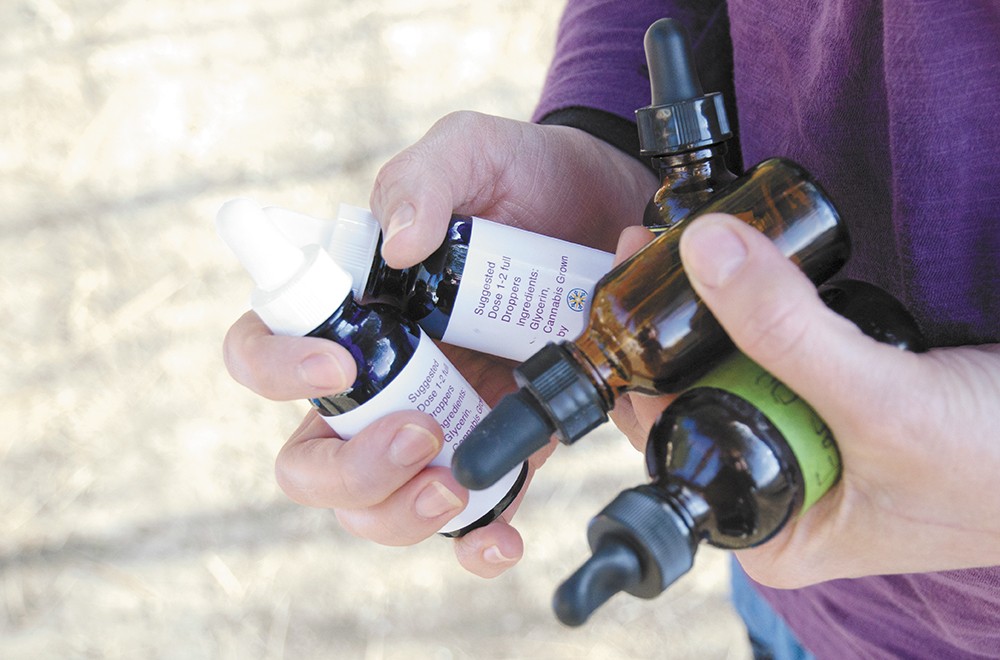 But eight years later, as his symptoms worsened, the family admitted him to Seattle Children's Hospital, where doctors recommended Lamictal, the same anti-seizure drug as before. Kim says she could not believe it: "We're back to the exact same spot."

In August of 2013, having reluctantly filled a prescription for Lamictal, Kim happened to come across a family successfully managing Doose Syndrome with marijuana extract. It seemed absurd and confusing. But short of options, the Kaluas, like many other Washington parents, turned to a substance they previously considered unthinkable.

While much of the public debate on marijuana legalization has focused on taxes, law enforcement or stoner puns, some families increasingly view marijuana regulation as a matter of life or death. Local marijuana advocates estimate more than 70 families across Washington use cannabis to treat a child with a serious medical condition such as epilepsy or cancer.

Those families have watched nervously as Washington lawmakers move to fold medical marijuana into the new recreational retail framework, leading officials to consider tighter restrictions on private growing and possession of medical marijuana. The Legislature recently failed to pass any new bill (SB 5887) this session, extending the uncertainty another year.

In the absence of consistent law or medical expertise, parents turn to each other, either in-person or online, for help navigating a brave new world. Kim found families in California and Colorado struggling with many of the same challenges. They trade research on marijuana strains, extract recipes and legal roadblocks.

"We have no experience with the usage of marijuana in either of our pasts," Bobby says, adding, "Our background is marijuana's in the same bucket as cocaine. [It] belongs in the absolutely illegal, go-to-jail zone. Just to bring it in the conversation, it's a bit of a head twist for us."

To treat children, families seek out specially cultivated plant strains containing low concentrations of the psychoactive THC, combined with high amounts of non-intoxicating cannabidiol, or CBD, which research links to the plant's legitimate medical benefits. Kim says the purest medical strains have a CBD-THC ratio of 34 to 1.

The Kaluas went to the Pacific Northwest Medical dispensary in Spokane to make their initial purchases for Koa. Owner Sean Green, who received the state's first processing license earlier this month, says providing cannabis to minors is a "very delicate" process that he only considers on rare, case-by-case terms after vetting physicians and medical records.

"Seeing people have a better standard of life is a reward in and of itself," he says. "These are just families trying to take care of their children."

Kim holds up a handful of small eye-dropper bottles of marijuana tincture, a highly concentrated CBD extract oil. Six months ago, she hadn't known what tincture was, but in that time — with the help of online tutors and chat rooms — she has learned how to process loose marijuana by boiling it down in alcohol and infusing it into olive oil.

They mix the extract into Koa's oatmeal or spread it into his sandwiches. Koa responded well, they say, but they quickly determined it would take an ounce of loose marijuana a week to cook down to the dosages he needed. At more than $300 an ounce, they needed to make it affordable. They reached out to Ryan Day in Thurston County.

A U.S. Marine Corps veteran now working as a children's health advocate, Day grows his own marijuana to treat his son Haiden. The 5-year-old suffers from Dravet syndrome, another form of epilepsy that causes dozens of seizures a day and leaves him cognitively delayed, similar to Koa. Day passes along much of what he has learned to other families.

"I am not ashamed of what I'm doing for my son," Day says. "It has dramatically improved his quality of life."

As he has lobbied in Olympia for improved medical marijuana policy, Day has also served as an informal consultant or sounding board for many regional families trying to get their arms around the shifting legal landscape. Having just found new hope, many families fear authorities could choke off access, impose impossible fees or criminalize their medication inventories.

"At any moment, the rug could get pulled out from under these families," Day says. "It's a very precarious situation right now. ... It's really a scary time."

While Day would like some clear and consistent regulations at the state level, he says the federal government continues to pose a huge obstacle to treating children. Because of marijuana's classification as a Schedule I narcotic, few agencies can legally offer medical support or guidance. Families cannot seek out specialized or less expensive strains across state lines. And they often pay thousands of dollars a year out of pocket because insurance won't cover it.

"It's a little ridiculous," he says. "We're mostly people who have no other options. We're trying to save our kids' lives."

With some guidance from Day and reduced marijuana costs through Pacific Northwest Medical, the Kaluas succeeded earlier this year in getting Koa on a stable regimen of CBD extract for about six weeks. After so many failed drugs and terrifying side effects, they say the marijuana results have been amazing. Koa became happier and more focused. He walks more. He talks more.

"His school attendance went up," Kim says. "That's something you can quantify. His speech went up. We noticed him using words we hadn't heard him use in a long time. He visibly had less seizures. Several people who he interacts with said, 'Oh my goodness. He's got his sparkle back.' And he does."

Those six weeks have them convinced that they can get their little boy back.

But they had to halt the treatment in February. At close to $1,500 a month, they could no longer afford to keep up with his dosages. They believe they will have to grow it themselves to make it feasible. Kim says they're putting together a long-term plan now, but wish lawmakers would stop threatening to change the rules.

"We're sort of at this juncture," she says.

Sitting nearby, Koa's head slumps to the right and his body goes limp. His eyes glaze over as Kim leans in to comfort him.

"He's having a seizure right now," she says. "He just blanks out."

In a patient and reassuring voice, she beckons him back, waving her hand in front of his face.