Local schools are getting creative in the fight to get kids eating better. 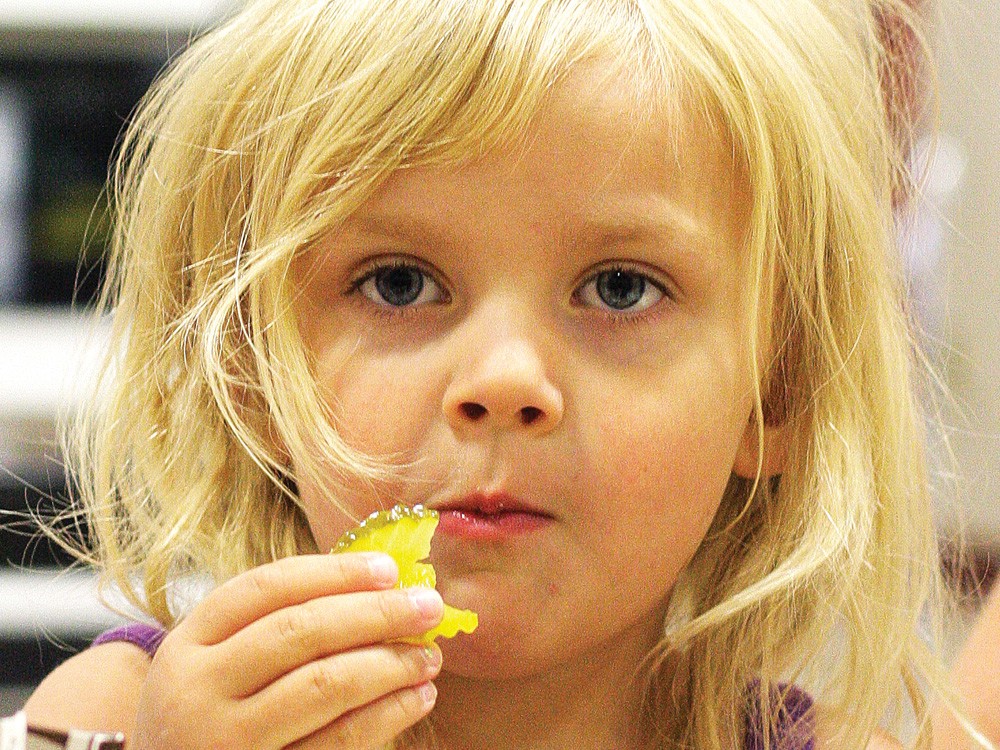 It was like Fear Factor for kids. Hoping to expose students to new foods, Spokane’s Shaw Middle School put on an eating challenge last year with samples of pickled pigs feet, edible flowers and octopus. It was the first time many students had seen so many different types of food at school, not to mention so many fruits and vegetables.

In East Valley schools, the lunch menu has included fall-harvest crops not from anonymous out-of-state growers, but from a neighboring farm. Last year, the East Valley Farms and Schools Partnership generated 4,000 pounds of produce. Half was used by the district — zucchini, potatoes, tomatoes — while the other half went to Second Harvest Food Banks.

In the Coeur d’Alene School District, students sampled unusual items like jicama and hummus at monthly “tasting tables,” and when green beans were served, elementary kids got beans to plant at home.

And at Lakeland School District’s John Brown, Athol and Spirit Lake Elementary Schools, students could fill their stomachs — and their sense of adventure — with Indonesian rambutan or New Zealand kiwi, all delivered to classrooms through the federal Fresh Fruits and Vegetables Program (FFVP).

Indeed, school lunches are changing here and around the country, in part driven by federal programs trying to change our kids’ eating habits.

The Fresh Fruits and Vegetables Program provides $50-75 worth of produce per student per year to all students in schools where 50 percent or more of the student body receive free or reduced lunch. Piloted through four states in 2002, FFVP now serves all 50 states, feeding nearly 4 million children nationwide with $158 million in funding.

Control estimates that childhood obesity has nearly tripled since 1980 and affects one in seven low-income, preschool-aged children.

Consuming fresh fruits and vegetables is one way to combat obesity, according to several reports, and it’s a cornerstone of the Let’s Move campaign. Launched in 2010, the program is unflinching in its indictment of American attitudes. We ride, not walk. We eat fewer home-cooked meals and more processed foods, snacking and eating in front of the television. Portion sizes are larger, while nutrient value is less.

“In total, we are now eating 31 percent more calories than we were forty years ago,” notes Let’s Move on its website, “including 56 percent more fats and oils and 14 percent more sugars and sweeteners. The average American now eats fifteen more pounds of sugar a year than in 1970.”

According to Let’s Move, most kids eat half their daily calories at school. For some, though, school meals may be the only regular food they get.

“The conundrum we’re in with school service,” notes Spokane’s Nutrition Services Director Doug Wordell, “is we have two extremes.” On one end there is obesity and less activity, he says, yet, on the other, kids are also going hungry.

Change has to be systemic, says chef Peter Tobin, a certified executive chef and longtime instructor at Inland Northwest Culinary Academy. “My philosophy on the whole issue,” says Tobin, echoing TV chef Jamie Oliver and his Food Revolution, “is in order to change the schools, kids and their parents have to learn how to eat better and demand it.”

Last year, Tobin responded to the call for “Chefs Move to Schools,” a regional component of Let’s Move, which connects local chefs with the community, food providers, parents, teachers and kids. Tobin’s been invited to two districts so far, Medical Lake and Mead, where he worked with high school kids to create healthier pizza from local ingredients.

On his own, he’s worked with students at Lakeland’s Spirit Lake Elementary, where his wife, Elaine Tobin, is a first-grade teacher. Last year, during a schoolwide “reward” day — tied to meeting accelerated reading goals — teachers offered breakout activities like board games or crafts. Elaine and the several dozen kids who signed up for her activity made homemade tortillas filled with sprouts, veggies, and fresh cilantro. Big success.

“They’re willing to try healthy foods,” says Elaine Tobin, noting she’s seen some improvement in kids’ food attitudes. Their lunch, she says, is typically a sandwich, chips and a cookie, although Top Ramen invaded the school’s lunchroom for a while. The salad bar is the first station in the lunch line now and kids are responding well. “When kids can choose the food, they’re more likely to eat it,” says Wordell, a registered dietitian with 14 years at the district. He jokes about perfecting his spinach-tofu recipes but knows that if he can’t almost guarantee kids will eat it, he can’t serve it. It won’t sell.

School districts can get federal reimbursements, with rates dependent upon the meal and the student. Wordell estimates his district’s food costs at $.96-$1.09 per lunch; the rest is labor, transportation, facilities, etc.

“Most businesses,” says Wordell, “their goal is profit. In education, it’s to break even.”

Last year, out of 300-some Washington school districts, Spokane ranked in the top three of the 25 schools that actually broke even.

Like Spokane, food service at East Valley has always been district-run. Each school has its own kitchen responsible for inventory and prep. Eating at school isn’t simply about filling up bellies, says East Valley’s Nutrition Services Director, Georjean Kuntz.

“I remind [staff] that, like the bus drivers, they are one of the first people kids see in the morning,” says Kuntz, “and their smile makes all the difference.”

It’s a philosophy shared by many in food services.

“Hugs are welcomed and encouraged,” says Ed Ducar, nutrition services director at Coeur d’Alene. “We want it to be a safe, caring environment.”

Money Where Your Mouth Is

There’s another deadline looming, however. In 2012, the National School Lunch Program is up for reauthorization and, like No Child Left Behind legislation, it significantly impacts education. It was created in 1946 in part to address childhood malnutrition and what the government perceived as its adverse effect on those entering the military. Providing free or reduced-price meals to schools through subsidies, NSLP served 7.1 million children at a cost of $70 million that first year. Cost and volume has risen exponentially, from $565.5 million in 1970 to $3.7 billion in 1990. In 2007, the number served was 30.5 million at a cost of $8.7 billion.

Expenses may have increased, but school subsidies have not risen since 1980. Nor do subsidies take into account geographic differences, although Alaska and Hawaii are reimbursed at a slightly higher rate.

Doyle, like most food services providers, wants to stay ahead of the compliance curve. He’s sorting through piles of paperwork in his Rathdrum office, one eye on the phone, waiting for confirmation that Spirit Lake Elementary has been approved by the HealthierUS Schools Challenge (HUSSC). When that happens, it will be only the third school out of 764 statewide to do so.

The second step is considerably more rigorous, including a site visit by the USDA. To put it into context, fewer than 2 percent of the nation’s roughly 98,700 public schools qualified since the program started in 2004.

None of Washington’s 417 public schools are currently recognized, although some Spokane school applications are pending.

An additional hurdle is the shift in menu-planning requirements. It’s no longer just counting calories or grams of things like protein versus carbohydrates.

Doyle, of Lakeland, flips open the 27-page “Enhanced Food-Based Menu Planning System.” Foods from the grain-bread category must be whole-grain or enriched flour as the primary ingredient by weight, a minimum of a quarter-cup, and offered daily at lunch, optional at breakfast. A quarter-cup of bread? Vegetable categories are dark green, orange, legume, starchy and other, while fruit requirements vary if dried, fresh, pureed or in juice form.

Add in kids with food allergies and special dietary needs. In Spokane, where Wordell reports that he has 300 students with life-threatening dietary needs, the district includes lactose-free and soy milk — as well as vegetarian — options for every meal, every day.

Wellness programs drive policies, too. The Coeur d’Alene School District, recognized as the 2010 Wellness Leader by the state of Idaho, has been complying with healthier vending-machine standards (which are only recently being promoted and may someday be required) for seven years. That means no soda, but rather low-fat snacks and fresh foods.

Spokane Public Schools, says Wordell, implemented a similar program in 2005. However, vending machines district-wide went from earning $336,000 a year for extracurricular activities (as they did in 2001) down to $36,000 last school year.

“It’s created challenges,” he says, “but it’s also about what’s the right thing to do.”

East Valley, with its Farms and Schools Partnership, acts as a model for what happens when good ideas take root. A few years ago, Lynette Romney, a parent of four, was in a district nutrition services meeting, discussing the state’s Farm-to-School program.

“It just dawned on me that we have all these farms,” says Romney. “And then I thought, ‘Why aren’t we doing that?’” Romney found support at every level of the district, eventually transforming a vacant lot between the middle and high schools into three acres of crops, including raised beds that are available to area residents interested in planting plots of their own. There are plans to create a student-run farmers market.

Additional community support has come from Washington State University Extension, master gardeners, business owners and local farmers. “We have such a fantastic community,” says Romney, “and that’s one of the things you find out about when you do something like this.”

East Valley’s farm program, like school food services throughout the region, continues to evolve, looking for new and better ways to educate kids about nutrition one mouthful at a time.