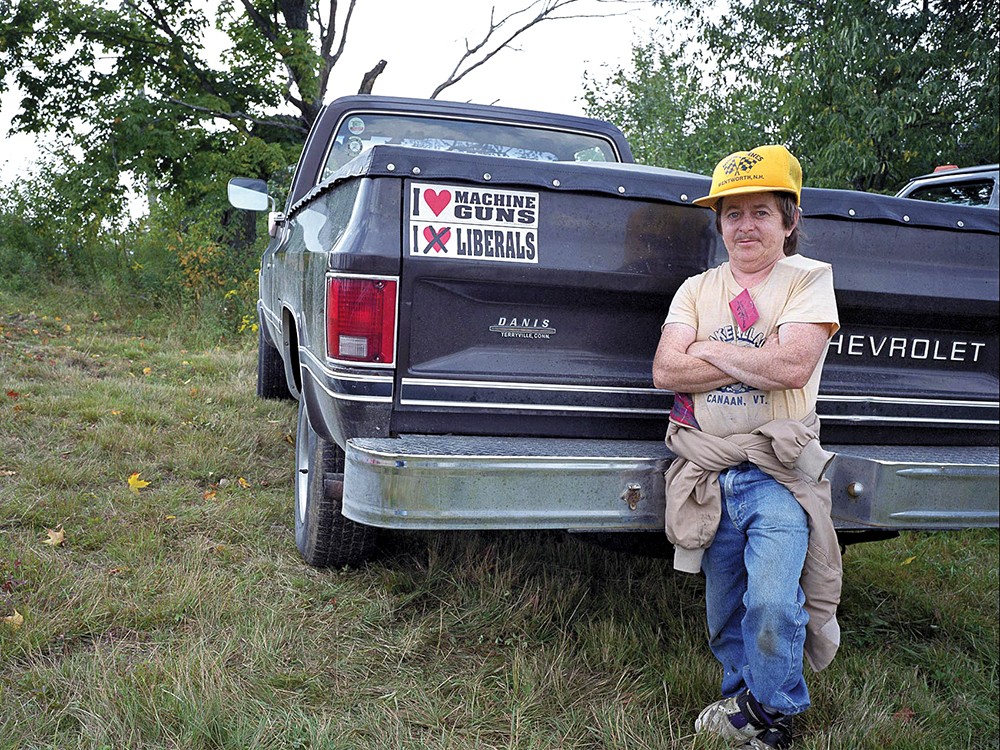 Just a taste of the quirkiness found in Jim Stone's photography.

A bit outside the norm. Not quite bizarre or fantastical, but definitely unusual.

That's the gist of what you'll see in "Bordering the Surreal," a new photography exhibit at Spokane Falls Community College featuring three distinct bodies of work.

Jim Stone captures the essential quirkiness of American culture in a series entitled Idiom Savant. There's diminutive Pete, described as "America's smallest fireman," who stands with muscled arms crossed, not quite eye-level with the bumper sticker on a black Chevrolet truck, proclaiming his love for machine guns and dislike of liberals. Jo Ann perches on a shabby swinging bench outside her extraordinary Benoit, Miss., home: a 727 airplane she refurbished to replace her former home, destroyed by storms.

Remnants of natural disasters are also prominent in many of David Graham's photographs, including post-Katrina New Orleans. In the tradition of photographer Robert Frank, whose 1958 book The Americans chronicled Frank's cross-country exploration of a nation in transition, Graham embarked on his own road trip to produce An Itinerant Life. Many of these photos demonstrate Graham's serendipitous vision: a row of port-a-potties outside an official-looking, neoclassical building in Omaha, Neb., or the trompe-l'œil double take of a real tree emerging behind a building on which a tree is painted.

Combined, Graham and Stone offer a contemporary spin on the narrative traditions of photographers like Diane Arbus and Lee Friedlander, who since the 1950s gave us humans at their most interesting — just being human.

By contrast, EVA, a volume of images of and by Spokane native Eva Kaiser, offers images never intended to present themselves as art, according to exhibition organizer Tom O'Day. EVA documents Kaiser's self-transformation through makeup, clothing, and hairstyle.

"There were times I'd see her and not even recognize her," says O'Day of Kaiser.

EVA represents a generational shift in attitudes towards photography, from comparatively modest numbers of printed objects to a virtual, image-saturated world. And by juxtaposing the large-format images by nationally known photographers Graham and Stone against the mostly snapshot-sized EVA images, O'Day adds another layer of complexity to the exhibit. He notes that Kaiser's impulse to document comes from the same place as that of Stone and Graham.

"At what point do people decide they're artists?" asks O'Day, who views the exhibition as a valuable teaching tool, not only for SFCC students but the community at large. ♦