How local controversy over Rent sold tickets and reinforced a community theater's sense of purpose. 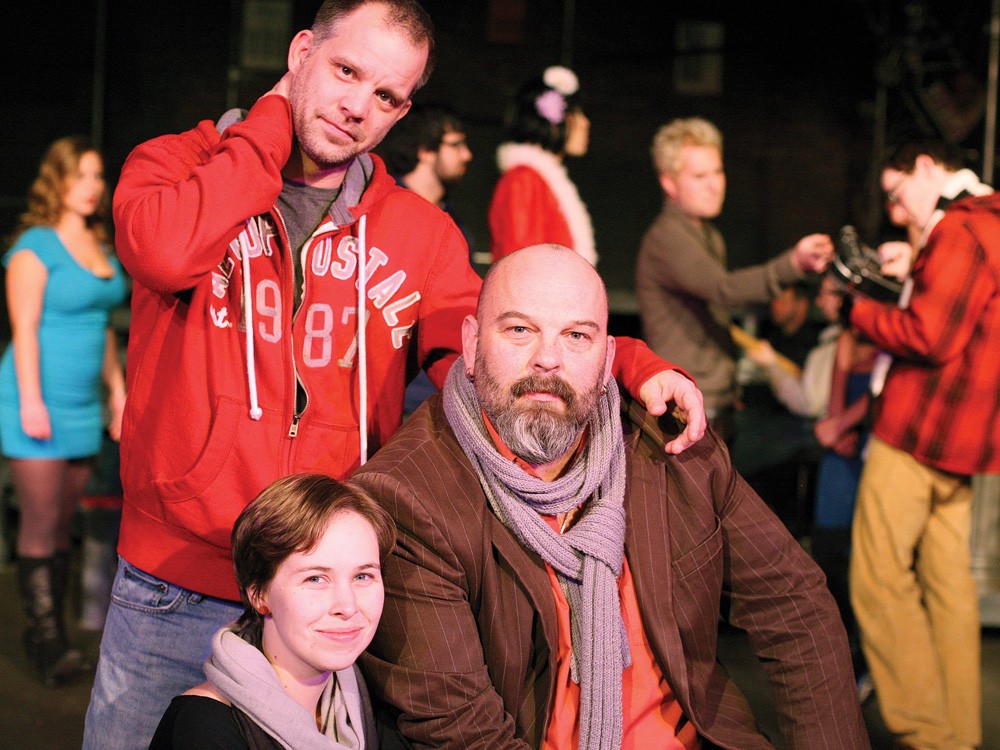 An Internet phenomenon known as the Streisand effect has it that the more you attempt to suppress something — whether it’s an unflattering photo or an embarrassing video — the more attention will be drawn to it.

In the art world, the Streisand effect has long been known by a simpler adage: Controversy sells. If you want to push copies of a book, ban it. If you want to pack a cinema, make sure there’s a throng of protesters picketing outside.

Lake City Playhouse’s forthcoming production of Rent has been at the center of this kind of controversy since early December, when a letter to the editor in the Coeur d’Alene Press tut-tutted the “fornicating interactions” of the characters. It urged others to pressure executive director George Green to call off the “degenerate musical” that “celebrates sin” by featuring strong homosexual characters who are affected directly or indirectly by HIV/AIDS.

Shortly thereafter, Green began to receive a deluge of correspondence. But not all of them shared the letter-writer’s sentiment.

“We probably get three to four emails a day asking us to not do the show,” says Green. “But we probably get somewhere in the range of around 15 to 20 a day in support.”

Even Dean Pitchford, the song- and screenwriter of the once-contentious Footloose, has sent him a personal message of solidarity.

“That being said,” Green says, “we didn’t pick Rent so that it would cause controversy. We picked Rent because it’s a good show. I personally fell in love with it many, many years ago. Ten minutes into it, I was lost. And I was initially skeptical about the content: the drug addiction, the explicit language, the overall rock anthem of it.”

Yet the recent controversy over that content has predictably proven a publicity goldmine. The story quickly spread from local news media to Internet forums and popular news aggregators like The Huffington Post, prompting countless public avowals to attend the show, often simply as a matter of principle.

“I’ve had people call and buy tickets and say, ‘I didn’t even know you guys were doing Rent, and I’m not totally sure what Rent’s about, [but] we’re coming to just support art and we’ll see how the show makes us feel,’” says Green.

In the historical encyclopedia of items that warrant moral outrage, Rent would be little more than a footnote. The rock opera first hit Broadway a full 16 years ago, and even then it was a thinly disguised modernization of Puccini’s century-old La boheme. The year it debuted, it won several Tony awards and a Pulitzer. A film version (directed by the very antithesis of avant-garde, Chris Columbus, who directed Home Alone 2 and Mrs. Doubtfire), appeared in cinemas in 2005 and aired last year on mainstream TV.

In other words, Caligula it is not.

But the group of artists and professionals at the heart of Rent’s tale includes a gay transvestite and two lesbians. Four characters have HIV or AIDS.

The farce is not lost on Green. “Look at a show like Oklahoma!, where you’ve got Ado Annie running around trying to sleep with everyone on stage,” he says. “But that’s funny! The same goes for Scarlet Letter last year — here’s a priest who had adultery with this wedded woman. Not one complaint.”

“I’m not trying to make anyone see Fiddler on the Roof and become Jewish. With Rent, I’m not putting on a show to make everyone decide to write checks to the LGBT society. Does Rent handle things a little more bald-facedly? Absolutely! But in the end it’s about love. It’s about overcoming your struggle.”

Director Troy Nickerson, fresh from overseeing A Christmas Carol at the Spokane Civic Theatre, insists that “there was never any intention of trying to shock people or rock the community.”

“The story is about celebrating life in the face of death,” he says, “and how community comes together when it’s needed to get people through it. I hope that theme is universal. These people are everymen. This is about human beings and compassion and love — all those things that are in every community.”

That word — community — is a common one throughout this debate, invoked by both sides to highlight the gravity of the situation. The moralizers maintain that Rent threatens Coeur d’Alene’s “wholesome community.” The play’s defenders counter that the play actually speaks to community, however unconventionally.

But all this focus on a specific production is in fact a broader question played out on a small stage. If the idea of community is so sacred, what then is the role of the theater that operates in its name?

Green defines the mission of community theater without rhetorical flourish: “To foster the arts, to create [shows with] a high artistic merit while educating performers and giving them the opportunities to hone their skills.”

By way of an example, he points to fresh faces starring in Lake City’s production of Rent — like Robert Garcia, onstage for the first time in his life as the landlord Benny, and high-schooler Keyonna Knight, who plays the exotic dancer Mimi. To highlight the broad spectrum of talent, Nickerson points to veteran actor Robby French. He will play the HIV-positive poet Roger. French is currently in callbacks for the 5th Avenue Theatre’s summer production of Rent in Seattle.

“The actors from this community need to be fed,” says Nickerson.

“As a director and as an actor, I know that they’re so thirsty for new experiences, for something different.”

Green agrees and says that hunger exists on both sides of the curtain.

“Audiences want to be enlightened and to have things to discuss.