Prefab construction could be having a renaissance, and WSU's Ryan Smith is at the forefront

Jacob Jones photo
Ryan Smith, director of Washington State University's School of Design and Construction, is an an expert on prefab construction.

s the director of Washington State University's School of Design and Construction, part of Ryan Smith's job is to keep up with the latest trends in building techniques.

Smith, also an architecture professor, moved to Pullman with his family three years ago from Salt Lake City, where he taught and worked for 14 years at the University of Utah. It was a bit of an adjustment moving to the much smaller city at first, he says, noting that "the kids at first were like, 'Where's Forever 21?'"

There was also that whole pandemic thing this last year, which moved teaching to a virtual setting. But the good news is faculty and staff will be able to return to campus come July.

In addition to his tenure teaching architecture, Smith has also literally written the book — well, six of them actually — on prefabrication, a.k.a. prefab construction.

In a nutshell, prefab refers to projects where instead of doing something like framing a house bit by bit on site, different elements are constructed in a factory to a fairly finished state before being brought to the building's ultimate location.

There, cranes can lift full walls, rooms or even full living units into place to be quickly sealed together.

The process isn't novel, Smith explains, with the idea really taking root a century or so ago.

"It's been toyed with by architects and builders since the Industrial Revolution," Smith says. "Taking advantage of machines to build our houses isn't necessarily new."

But since that time, the technique has had fits and starts in popularity, he says. First, there was a boost in prefabrication's popularity just after WWII when soldiers returned and started settling down and starting families.

Then in the late 1960s and early '70s, Mitt Romney's father, George Romney, took charge of the federal Department of Housing and Urban Development, Smith says. Romney came from the auto industry, known for its assembly lines.

"George was an industrialist, and he had this idea: 'Can we meet the pent-up demand for housing by using WWII factories that lay dormant across the country?'" Smith says.

So the federal government invested in several factories across the country, including one in Seattle, to explore prefabrication techniques for housing. But Smith says when Ronald Reagan took office, funding for the program dropped off.

While HUD had come up with high quality designs to meet the need for single-family housing, Smith says the most well-known idea that came out of the program was a lower quality product: the mobile home.

"That is the legacy from our country's last major investment in prefabrication," he says.

Unfortunately, mobile homes built to federal standards often leaked, were inefficient and became associated with lower quality of life, even as they helped meet the overall need for housing, Smith says.

Fast forward to 2002, he says, and people were asking why the U.S. wasn't using prefab construction with the same success as other countries such as Sweden and Japan. So Dwell magazine ran a contest telling architects to partner with mobile home/prefab factories to design high quality, affordable homes.

Tyler Schmetterer/MOD X photo
Prefab homes are constructed in sections at a factory and then assembled on site, reducing construction labor costs and saving time.

The creative ideas entered for that contest spurred some companies that still exist today, Smith says, and helped put prefabrication back in the spotlight.

Currently, labor shortages in the construction industry are causing a bit of a prefab resurgence, Smith says.

"Labor has increased in cost, and the availability of labor to build homes is not there. It's a real problem right now," he says. "Because of that, now people are saying, 'Wow, this idea of prefabrication could really fly economically. It makes so much more sense: It's more productive, and frankly we don't have the labor. This could be something we look to.'"

In the Spokane area, Katerra, a cross-laminated timber manufacturer, has big plans to expand production of prefabricated walls and building elements.

Another company, Washington-based Blokable, has designed full modular affordable housing units that can be stacked next to and on top of one another. They're completely finished in the company's factory, making it much faster and more affordable to finish a multifamily apartment project.

So far, while prefab techniques definitely save time on projects of different sizes, Smith says it's really in that multifamily or hotel size where the speed translates to cost savings.

"The advantage that has been realized has been speed. We've seen 30 to 50 percent time savings," Smith says. "That may not benefit you all that much financially on a single-family home. But on a big, multifamily project or a hotel where you've gotta open to get revenue? Yes."

There are a few other building techniques on the horizon that Smith says someone building a single-family home might keep an eye out for.


If you'd like to help reduce the impact of your new home, you could build it to the voluntary international building standard known as a "passive house." These homes require very little to no energy to heat and cool.

Smith says he's also a fan of something called ICF or insulated concrete forms, in which semi-hollow foam blocks are put next to one another to create the form for concrete pours for, say, a basement. The blocks help insulate the room better and reduce the time that would've been spent building steel or plywood forms, he says.

Another recent innovation Smith says he's seen is something called "BamCore," which is a framing alternative to wood.

"So you're building walls not out of two-by-fours, out of lumber, but out of bamboo that is rapidly renewable and sustainably harvested," Smith says. "I think there's a lot of potential for this, though it still needs to go through a lot of testing."

The original print version of this article was headlined "Fabulous Prefab" 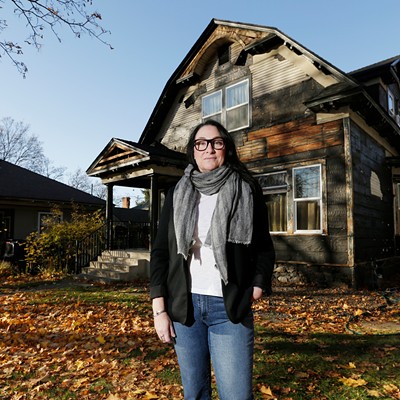 The Spokane Public Facilities District keeps vaulting over obstacles while running toward the dream of a Sportsplex. Will it be worth it?