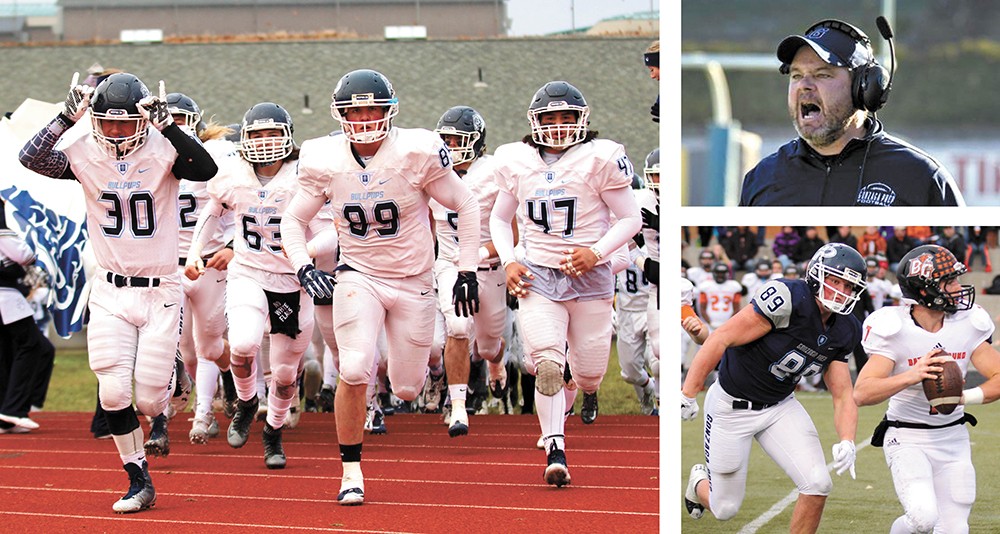 At Gonzaga Prep, the shadows of football legends

can be hard to escape. Since the 1930s, the Jesuit high school has produced a long line of championship teams and eventual NFL players, including recent stars like Bishop Sankey and Steve Gleason.

This year's undefeated Bullpups, who head to the WIAA 4A state championship game against Skyline of Sammamish in the Tacoma Dome on Saturday night (7:30 pm, Root Sports), don't have to look past their own sideline, or perhaps their own dads, to see the legacy of Prep football. Head coach Dave McKenna was a member of the last Bullpup team to win the state championship back in 1986. Nearly 20 players on the team, including Jack Machtolf, Shane Eugenio, Josh Condon, Jim Orchard, Jake Tucker and Mason Plese, as well as McKenna's two sons, standout senior linebacker Conor and sophomore Hunter, have parents who graduated from Prep.

"There's obviously a huge tradition at Prep," says University of California-bound defensive end and running back Evan Weaver, whose dad, Todd, is a Prep grad, class of 1983. "You just walk into the gym and you see all the titles that we've won — the state championships and GSL championships. And hopefully we can create our own legacy as a team.

"It's not just huge for the team. It's really big for the alumni and everybody in Spokane," says Weaver, as punishing a defensive player as Spokane has produced in the past decade. (He also has 15 TDs as a running back.)

In the 1980s, the state championship games were played inside the cavernous yet beloved Kingdome, and G-Prep played in five of them between 1977 and '87. Still, coach McKenna says that heading indoors for another title matchup 28 years later isn't exactly taking him down nostalgia lane.

"It brings back some of those memories," he says, "but that's just talking about glory days, and those are long over. This is about these kids, and I'm along for the ride."

That said, McKenna's program is conscious of preserving its legacy; the coach brings in a class of alumni to the team's summer training camp for a dinner, during which the former players share insights on the game and much more.

"They tell these kids that they need to leave their own legacy, and ask them what do they want to leave behind," says McKenna. "It's not just the wins."

This 2015 team will leave behind no shortage of wins during a season marked by blowouts throughout the GSL schedule and a bruising, hard-won run through the state playoffs that culminated with a 31-17 win over Richland on a frigid afternoon in the Tri-Cities last Saturday. A lot of the players, however, point to the game at Bellarmine Prep, their second of the year. Just 10 minutes in, the Pups were down 21-0; they wound up winning 34-28 in overtime and have been on a roll ever since.

Now Gonzaga Prep, a private school with less than 1,000 students, faces Skyline, a public institution with an enrollment of more than 2,000 and a rich football history that includes winning seven championships over the past 15 years.

While some of the players' parents will tell you they started to notice something special about this class as far back as fifth grade, when they were all pounding each other in the parochial football league, McKenna says he knew on the first day of practice last summer that this would be a special group. It's not just that they win, but the way they go about it.

"It's a fun group of kids to be around. That's a component of this team," says McKenna. "They have fun at practice, and they're having fun during those games." ♦