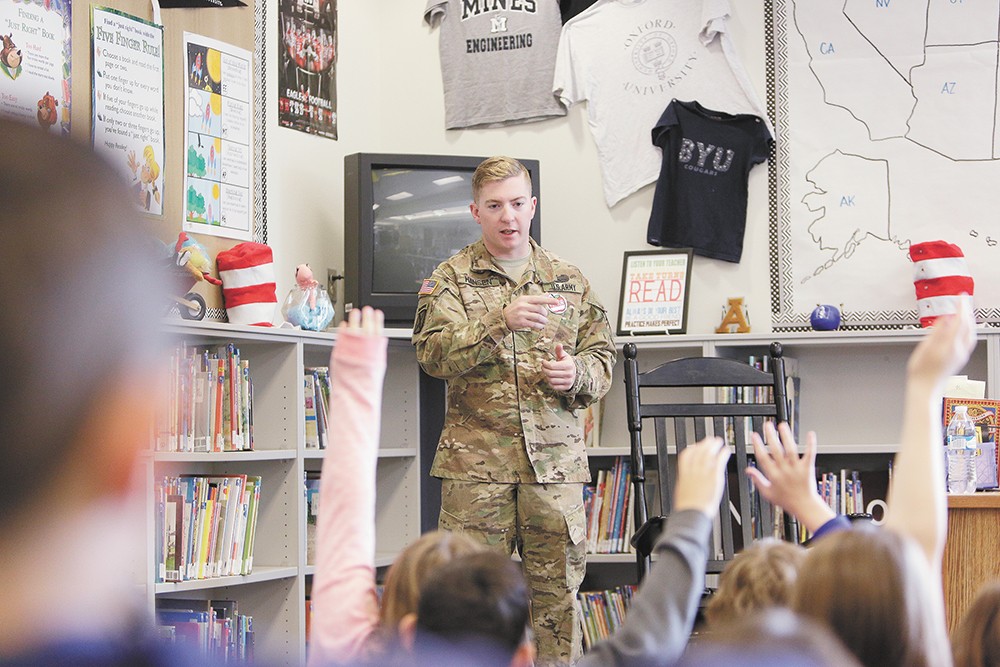 Young Kwak
Army Spc. Chris Hansen, stationed at Fort Drum, N.Y., visits a first-grade class at Adams Elementary School, where he was once a student.

After serving two tours in Afghanistan with the Army,

artillery soldier Specialist Chris Hansen is used to handling rapid-fire shots, but the ones coming at him on a recent Tuesday morning were especially fast and furious. Dressed in his fatigues, and standing in front of a group of 25 fifth graders seated on the library floor at Adams Elementary in Spokane Valley, Hansen answered a nonstop stream of student questions.

"How did you wash your hands and get water in the desert?" "What was your most dangerous mission?" "Do you get to use Morse code?" "Did you kill anybody?" "How high up do your boots go?" "Did you drive to your missions, or did you fly on one of those planes with a big flap on the back?" "How do the enemies send threats — do they call or leave letters?"

This was a long-anticipated face-to-face meeting of Hansen and the students who have been his pen pals for more than two years, ever since Hansen's first deployment to Afghanistan in 2013. As a former student at Adams Elementary, Hansen remembers sitting at his desk, writing letters to servicemen in Iraq, as part of Mrs. Custer's library class. Fast-forward 13 years. The Central Valley High School graduate found himself in the Army, deployed to the far side of the world, with the job of protecting his base.

his former Adams Elementary librarian, learned that Hansen was deployed, she decided to have her students write him letters. Custer, whose own son is in the Army, has had her students write letters to local servicemen ever since receiving a request from Fairchild Air Force Base in 2003. Her fourth- and fifth-grade students were thrilled whenever Hansen's return letters arrived in the mail. He sent home his unit patch to their class as a personal gift, and the students sent him a Dr. Seuss bookmark and books to read. "I remember when I was in school, doing the exact same thing for soldiers. Being on the other side really makes it that much more meaningful," Hansen writes in one letter of thanks.

When their packages would finally arrive at his base, Hansen's entire platoon enjoyed reading the letters and hearing what students were learning. Soon, Hansen convinced eight of the men within his platoon to join him. They each adopted a classroom at Adams Elementary, and wrote letters, sharing about themselves. When the students made them a festive Christmas poster, it went up on the walls of the barracks. When a camel spider made its home in their barracks, the servicemen took pictures of "Frank" and sent them to the students.

"A lot of the guys have kids back home, so they understand kids, and they were excited to participate," says Hansen. "It was fun. Kids don't know it, but they say some pretty funny things." The letters, along with the books the students sent to the servicemen, brightened their days. In turn, Hansen's platoon sent a Veterans Day video for the students, giving them a demonstration of firing a howitzer and a chance to see their wall that was decorated with pictures from Adams students. "It was always a boost to morale, knowing that kids at my school were so excited about what I was doing and were thinking of me," says Hansen of the pen pal relationship. 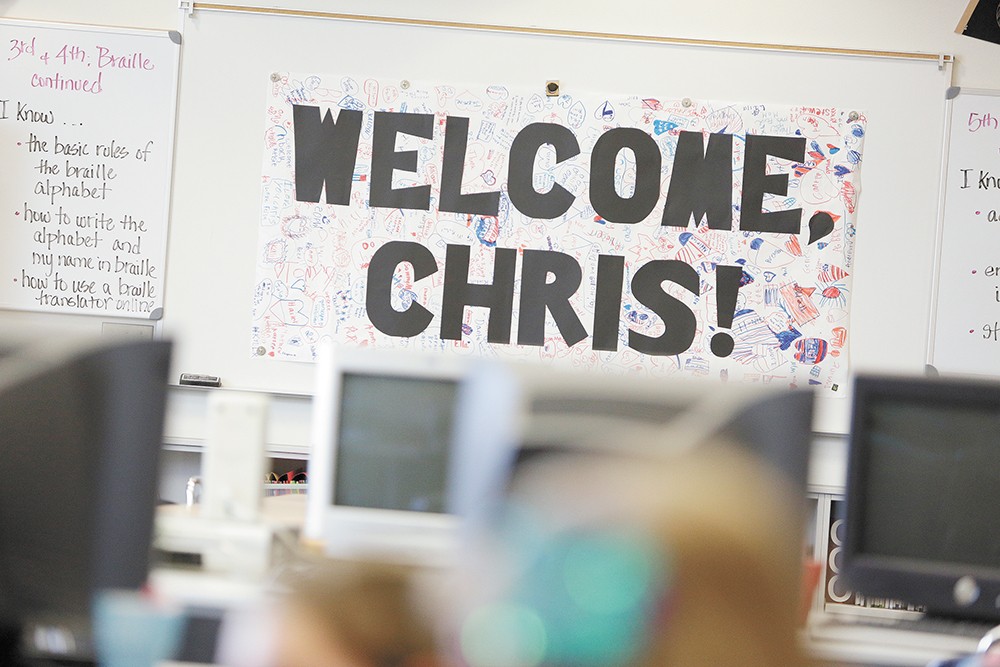 Joining the Army opened the world to the 2011 Central Valley graduate, who has now traveled coast to coast in the U.S. and has visited six different countries: "I used to look at books and pictures showcasing the Army, and wonder what it would be like. Finally, I decided maybe I should quit wondering what it would be like, and just go do it."

One of the rewarding parts

of his time in the service has been building this pen pal relationship, Hansen says. Up until this meeting, though, it had only been letters, gifts and videos that connected Hansen to the group. "I've been wanting to come visit, but every time I've been home, the school has been closed for Christmas or summer break," he says.

On this Tuesday, Hansen finally got the chance to meet the students face-to-face. A group of students spent their recess with their noses pressed against the library windows, staring in to where he was, exclaiming "It's Chris! It's Chris!"

When a first-grade student raised her hand and timidly asked about the realities of war, Hansen answered his young friend in relatable terms. "Have any of you ever been bullied, or had a friend who was bullied?" he asked. "You know the right thing to do when your friend is bullied is to stand up for them. Well, my friend was getting bullied, so my other friends and I went and stopped the bully."

After asking him questions all day, there are now more than 440 students who have a friend to look up to; one who will keep the bullies away and answer all their rapid-fire questions. ♦