By Heidi Groover and Lisa Waananen

courtesy graphic
The new marijuana logo from the liquor control board.

After eight public forums, months of comments and hiring an expert at more than $80,000 a year, you’re looking at the Washington State Liquor Control Board’s first pass at the rules that will govern one of the nation’s first recreational marijuana markets. They’ll take feedback at rules@liq.wa.gov until June 10, and in July the board will hold public hearings on its official rules. (At that point, changes are unlikely.) The board expects to take applications for 30 days starting in September and begin issuing licenses by the end of the year, though it won’t say how many operations will be allowed per county.

Meanwhile, Spokane City Councilman Jon Snyder is leading an effort to determine how the city will align its laws with the state’s and whether it will add any additional regulations. In light of the draft rules, Snyder says he’s especially worried that operating hours (6 am-2 am) could be disruptive on commercial lots close to residential areas.

While the recreational marijuana law doesn’t mention anything about medical marijuana, legislators have discussed moving both systems under the liquor control board or taxing medical pot at the same rates to discourage illegitimate crossover. That’s still up for debate. And, of course, the biggest unanswered question remains: Will the feds allow all this? 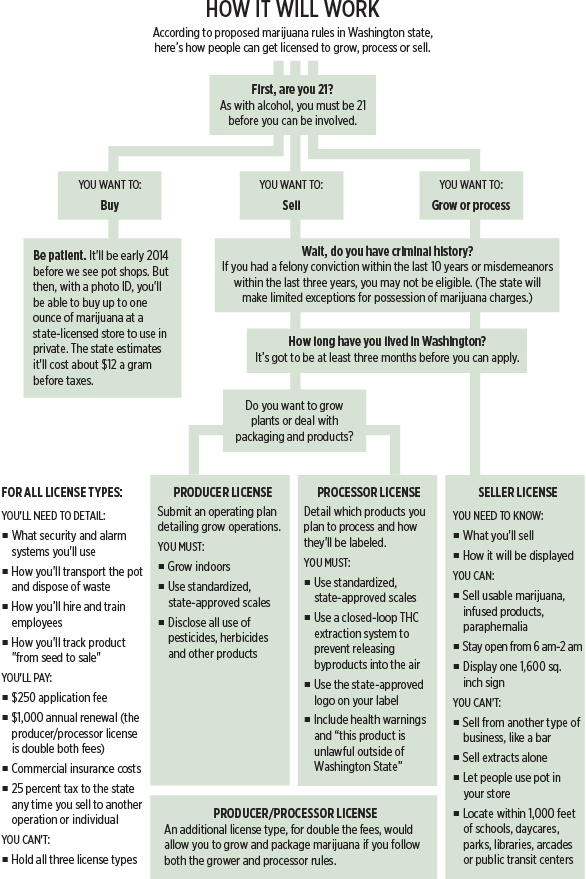