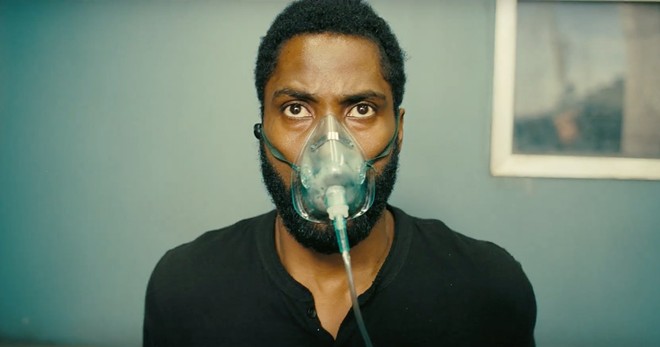 Mask up: John David Washington in Tenet.
★ ★ ☆ ☆
Christopher Nolan's Tenet seems to have been made with its own Wikipedia plot synopsis in mind. Most, if not all, of it will make little sense as it's unfolding, but don't worry: You can scramble to the internet once the movie's over to suss out what the hell you just saw.

Yet disorientation has rarely been so dull. This is a dour, clinical film that joylessly zig-zags through a hilariously convoluted plot involving time travel, forged art, buried plutonium, Soviet secret cities, impending nuclear proliferation, and men in suits meeting covertly so they can exchange briefcases. It's a major disappointment, and the first Nolan film that I've actively disliked.

The movie gets off to a strong start, however, with one of Nolan's trademark flash-bang cold opens. Masked gunmen interrupt a performance in a Russian opera house, looking for an undercover spy in possession of a mysterious artifact, but they're foiled by a SWAT team that dispels a gas knocking everybody out. Here's where we meet our protagonist — named, uh, "the Protagonist," and played by John David Washington — who rushes out of the theater with said spy, only to be apprehended by other spies.

The Protagonist chomps down on a cyanide pill, only to wake up later in a daze. The capsule was a fake, made by a shadowy organization called Tenet as an aptitude test for potential agents. Following a brief recuperation montage, the Protagonist is handed a pretty big task: He, alongside another agent named Neil (Robert Pattinson), must prevent an inevitable World War III that'll reduce humanity to ash.

The key to all this is Russian arms dealer Andrei Sator (Kenneth Branagh, chewing the scenery), who has weaponized an unexplainable scientific phenomenon known as "inversion." It causes time to progress and unwind simultaneously, so you can watch the future working its way backward to the point that it becomes the present. The Protagonist strikes a deal with Sator's art dealer wife Kat (Elizabeth Debicki): She wants to flee from Sator's abuse with their young son in tow, and the Protagonist will help her if she lets him infiltrate Sator's inner circle.

What follows is basically a series of Mission: Impossible-style heists, a couple of which we see again but from different angles and in alternate timelines. Some of these sequences have been (no surprise) impressively staged, including a high-speed freeway chase that has cars from the future pursuing cars from the present (or maybe it's the other way around), and a set piece involving a fake Goya painting, a stockpile of gold bars and an exploding Boeing 747 is wound as tightly and precisely as a Swiss watch. As for the big finale, which finds warring factions shooting at each other in the Serbian desert, it's kind of a mess.

Though Nolan has paced the movie breathlessly (every scene plays out like the final 20 minutes in any other action film), it somehow manages to feel turgid all the while. In between stunts, we're treated to one flat and expository conversation after another, which are not only perplexing but usually difficult to hear — muffled behind oxygen masks and tactical helmets, or drowned out by the insistent thrum of Ludwig Goransson's score. There are droning discussions of parallel universes and quantum mechanics and algorithms and paradoxes, with the actors racing through pages and pages of dialogue as if the sheer speed of their delivery will distract from its senselessness.

In the past, Nolan's shuffling of chronology has at least been anchored in recognizable humanity. Memento (2000) similarly works backward and forward simultaneously, but it's suffused with melancholy and loss. The soldiers in Dunkirk (2017) may not emerge as distinctive personalities, but their very uniformity feeds into the film's themes of warfare crushing all sense of time and identity. The characters in Tenet, meanwhile, are nothing more than chess pieces; their roles are purely functionary. It does flirt with one compelling idea — when confronted with his own mortality, Sator decides everyone in the world deserves to be snuffed out, too — but it's swallowed up in the cacophony.

I don't doubt that Tenet makes perfect sense within the mind of its creator, and I'm sure it would all click into place were you to diagram its story threads on a corkboard with 3-by-5 cards and webs of red yarn. (Several writers have pointed out that the movie is filled with explicit references to Sator squares, from its villain's name to its palindromic title and structure. Maybe that unlocks the mystery, or maybe it just further muddies the waters.) This is the sort of movie that's more fun to discuss in internet forums than it is to actually watch.

Besides, these sorts of puzzle-box movies usually reveal themselves to be less complex than they initially appear, and the nuts and bolts of Tenet's story aren't too far removed from the stuff of a Roger Moore-era James Bond adventure. And maybe that's my problem: The movie throws a lot of Big Ideas and complicated theorems at us, but they're all in service of a plot that doesn't really have anything new or compelling to show us. In that sense, Nolan expends a whole lot of effort to merely go through the motions.


Note: I saw Tenet in a Coeur d'Alene theater with about 300-plus seats, which allowed for at least 10 rows between myself and the two other audience members who attended the same screening. Experts have detailed the risks of visiting a movie theater mid-pandemic, so please be cognizant if you do choose to go.