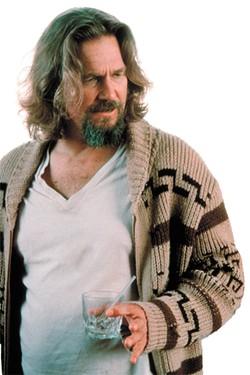 It's one of the opening lines of Joel and Ethan Coen's 1998 comedy The Big Lebowski, uttered in drawling voice-over by Sam Elliott's omniscient, nameless cowboy narrator. He's referring, of course, to Jeff "the Dude" Lebowski (the great Jeff Bridges), the bathrobed L.A. slacker at the heart of the movie, but it's the kind of pseudo-philosophical aside that could belong in any of the Coens' other films.

You could even think of it as the rhetorical prompt that drives their work, considering they almost never structure stories around main characters who'd fit your standard definition of a hero: Your standard Coen protagonist is typically a self-centered asshole (Llewyn Davis), a meek pushover (Barton Fink) or a well-meaning moron (anyone in Raising Arizona and Burn After Reading). Sometimes they're all three.

And yet the Dude, in his own sloppy, self-mythologizing way, floats above those narrow categorizations in a haze of pot smoke and patchouli. If he is a hero, it's surely not because he wants to be.

He really doesn't care, man. He's a guy of simple pleasures. He drinks White Russians like they're water and smokes roaches in the bathtub. His love for Creedence Clearwater Revival is matched only by his distaste for the Eagles. The only real human interaction he seems to have is with his bowling teammates: the short-fused, flat-topped Walter (John Goodman) and the perpetually confused Donny (Steve Buscemi).

Inspired by cantankerous Hollywood publicist Jeff Dowd, a friend of the Coens, the Dude has become one of contemporary cinema's most beatified burnouts. It's difficult to remember, then, that he was initially paid little attention outside circles of the most devout Dudeists. 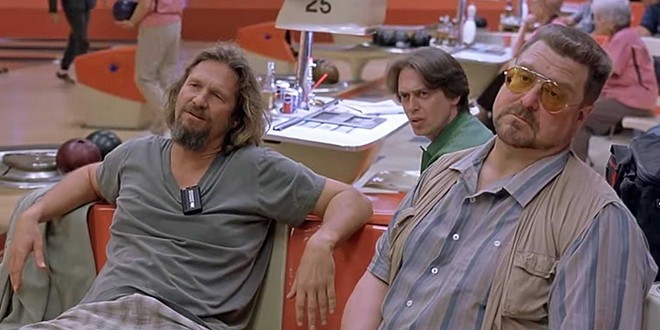 The Big Lebowski was released 20 years ago last month, the Coens' follow-up to their acclaimed, Oscar-winning arthouse smash Fargo. But Lebowski wasn't the hit Fargo was, earning less money despite playing on more screens during its short theatrical run. Reviews were more muted, too; even the critics who liked it conceded it was lower-tier Coen brothers.

But if you squint at them, Fargo and Lebowski have quite a bit in common. They're both off-kilter riffs on noir tropes, unorthodox comedies punctuated by queasy violence, and they both feature characters whose general incompetence further ensnares them in a complex web of double crosses and mistaken identities. And like Fargo, the broad details of Lebowski's crime plot turn out to be mostly inconsequential: It's basically a series of MacGuffins allowing the Coens to amble about in the weird world they've created.

It's more a film about behavior than story. Much of its humor stems from the specific quirks and weird habits of its characters, and there are a lot of them: The creepy rival bowler Jesus (John Turturro), the feminist outsider artist (Julianne Moore), the snivelling assistant to the millionaire (the late Philip Seymour Hoffman).

The better you know these people, the funnier they become, which explains why the movie seems to improve upon repeated viewings. We've even developed a weird affection for the Dude, Walter and Donny on our second or third go-around, a surprise considering they initially appear to be doodles as opposed to flesh-and-blood human beings.

That's surely why The Big Lebowski didn't immediately connect with mainstream audiences in 1998, who had recently discovered the immediate, raunchy pleasures of Austin Powers and the Farrelly brothers. But Lebowski has since become one of the biggest cult films since The Rocky Horror Picture Show. It's a staple on cable TV (the editing of its frequent obscenities requires some serious creativity) and much of its dialogue has entered the popular lexicon ("That's just, like, your opinion, man" is now the stuff of memes).

And let's not forget Lebowski Fest, a two-day, traveling celebration of the movie that's been going on since 2002 and which most of the film's cast has attended.

Since Lebowski was released, the Coen brothers have written and directed 10 more features, including Best Picture Oscar winner No Country for Old Men. But this shaggy, loose-limbed and deeply strange comedy about two men named Lebowski remains, arguably, their most generally beloved contribution to pop culture. Perhaps that's because, like its unorthodox hero, it really doesn't care if you like it, which makes it all the more weirdly likeable.♦