You could say it all started when the tribes of the plateau country began gathering around the Spokane River Falls to trade, fish and socialize. Or when James Glover was so taken with the roar of the river that he staked out a pioneer outpost. Or when that falling water was tamed and electrified the young city. Or when the world came to visit Expo '74. Or in 1978 when the World's Fair site transformed into Riverfront Park — our Central Park, an urban greenspace for all to enjoy.

This place has been bringing people together for millennia.

But the latest version, in all it's fresh glory — Riverfront Spokane — traces back to 2013, when newly elected Mayor David Condon kicked off a public process that, with the City Council's backing, won the support of nearly two-thirds of the citizens. When complete, more than $70 million in improvements will have been invested in Riverfront Spokane.

"Even with all that history and culture, we've been able to build on relationships with the citizens and different groups like the Spokane Tribe," says Garrett Jones, acting director of Spokane Parks, who has been a leader of the redevelopment since the start. "We have balanced the importance of the past while looking at the next 40 years — creating a canvas where we can create new events, along with new places to play and explore."

Since the opening of the Numerica Skate Ribbon in 2017, the Spokane Parks Department has cut the ribbon on one project after another in its phased approach. Now, as citizens are enjoying the new park, and as the final few designs are under construction, let's take a tour: 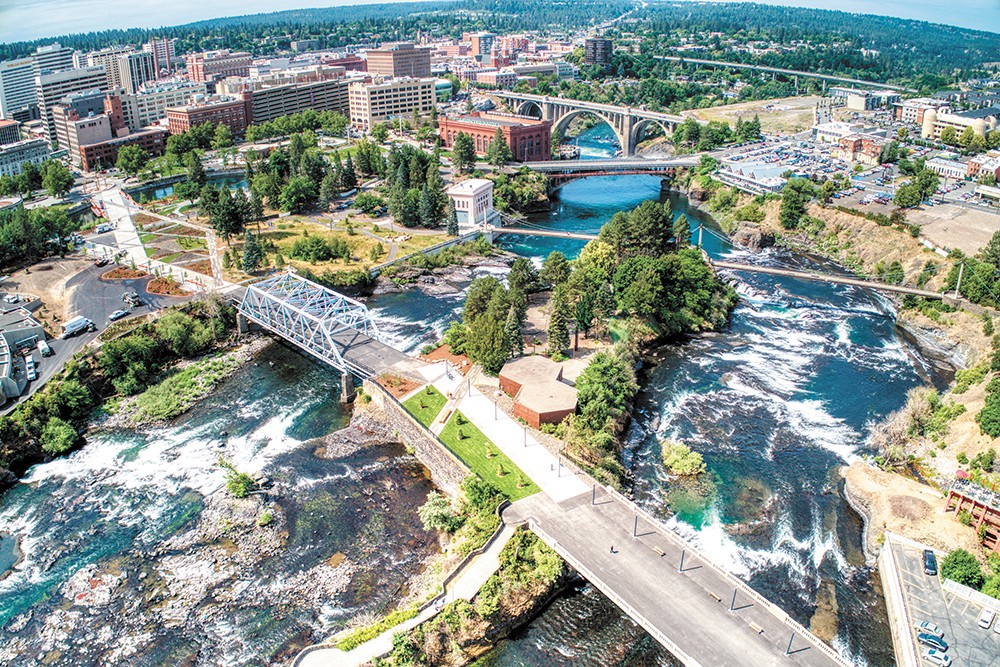 Spokane has a river running through it, separating north from south. One consensus among planners was that Riverfront Park needed to connect the two sides better. That's why the biggest change to the landscape is the Howard Street Promenade. Where the path through the park was perhaps a little daunting, now it's inviting, with new power and lighting. A geometric, pick-up-sticks design with multiple secondary and tertiary pathways, using different paving materials, seating and view corridors, makes for an engaging stroll.

"The word 'promenade' has more meaning than just a connection," says Guy Michaelson, principal at the Berger Partnership, the landscape architects and urban designers behind the promenade. "This is about adding that social layer — that this is a place filled with people."

Starting from the north, you enter the park across from the Arena — a spot marked by the refurbished Expo Butterfly. You cross the first of three bridges to the newly renamed Snxw mene (sin-HOO men-huh, Salish for "Salmon People," formerly Canada Island). Then, the historic Blue Bridge connects you to Havermale Island, the center of the park, where the Promenade improvements are most prevalent. Next you cross the brand new Orange Bridge, built wider to accommodate crowds and even host events; check out the "get-down" feature, where you can approach the river and take in some of the park's best views. Then you arrive at the south entrance, marked by the Rotary Fountain, and on into downtown Spokane.

"This is really three different dog legs through the park," says Michaelson. "It's not about taking a direct line; the journey matters."

From the Radio Flyer Wagon to the Bloomsday Runners, the south end of Riverfront Spokane is its most active space, facing directly on downtown. The South Gateway is the park's front door. Before the park renovation, the space was showing its age, with the same old waffle house from Expo '74 housing the Looff Carrousel, the Rotary Fountain failing from the inside and the bridge connecting to Havermale Island in need of a complete replacement.

So it's no surprise that lots of bond dollars were spent on the South Gateway, and its projects were first in line. Now the fountain has been completely rebuilt, there's the brand new, wider Orange Bridge leading north, along with the Numerica Skate Ribbon, among the first of its kind in the West Coast. And the Looff Carrousel has been fully restored, with all the animals freshly painted; their new home is highlighted by a new riverside boardwalk and is climate-controlled to extend the life of the priceless antique that has been entrusted to Spokane Parks.

Bette Largent is the keeper of the Looff Carrousel, which started life in 1909 at the old Nat Park then moved to Riverfront Park in 1978. Largent says the challenge is that not only are these hand-carved creatures fragile, but kids are invited to play on them every day.

"I'll sit and watch the kids," Largent says. "They have to pet [the horses], they have to wrap their feet around their necks. Their little shoes hang at the right angle so that the buckles scratch the paint. That's love wear, and it's the cost of doing business." 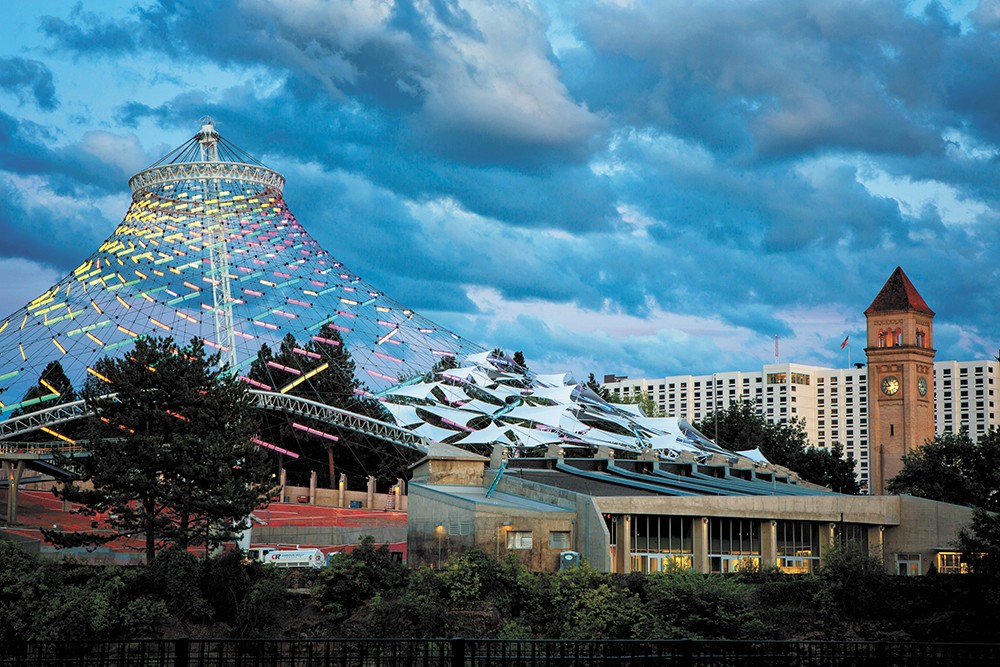 James Richman photo
The new, decluttered Pavilion has an elevated pathway and LED lighting to give it a "wow factor."

Seattle had it so easy. After their World's Fair in 1962, the uses for the Space Needle were obvious. Not only would it become a civic icon, but it remained a destination for diners and visitors wanting a look out over the Emerald City. In Spokane, our signature piece of leftover architecture — the United States Pavilion — was more of a riddle.

Built as a temporary structure to house World's Fair attractions, including the first IMAX movie, its location became a problem; with no automobile access, its commercial uses struggled. Starting in 2013, planners focused on a multiuse space that would work for events and also be great to visit anytime. They also wanted to instill a "wow factor."

"The scale of the whole thing is immense," says Keith Comes, a principal at NAC Architecture, which along with Garco Construction took on the challenge. "It felt like a project you might get assigned [at architecture school] that would never be real, but here it is real. It's been really exciting."

The most recent bond project to reopen, the entire site has been upgraded with power to support anything from a food festival to a major concert. Inside the ring, everything has been opened up and decluttered, with a natural amphitheater marked by paths, terraces and lawns. The "wow" comes in the form of an ADA-compliant walk visitors can take to get high above the Pavilion floor and the Spokane River, with amazing views. And in what is the first system of its kind, they installed programmable illumination blades on the net, with millions of colors, to make it a one-of-a-kind beacon.

"It's fantasy architecture, done 40-plus years ago," Comes says, "and yet it still feels cutting edge."

Young Kwak photo
Improvements on the North Bank will make it useful again — and connect to downtown via the Promenade.

The North Bank has long been home to nothing more than a couple of dirt parking lots and an old city building used by parks maintenance, but that's about to change.

"That parcel has always felt like an outlier," says Dell Hatch, a landscape architect and principal in charge of the North Bank project for Bernardo|Wills Architects (BWA), "so it's really cool to integrate that north side as another element of the park."

Although just underway and slated to finish in the summer of 2020, its future is hinted at by the sunny new "Riverfront" sign and the renovated Lilac Butterfly that flies again at Mallon and Howard across from the Spokane Arena.

Soon the space will be home to a wheels park for skateboards, inline skates and scooters, new Hoopfest courts, parking served by improved access off Washington Street, and a new operations building to serve the park's back-of-house needs. The North Bank will also connect with the soon-to-be-built Sportsplex, located on the basalt bluff above.

But the centerpiece will be a 1-acre-plus destination playground themed around the Ice Age Floods that carved out the Spokane River Gorge some 15,000 years ago.

"We're working with Nigel Davies [a geologist from EWU], and we've held a workshop with the Ice Age Floods Institute," says Bill LaRue, a landscape architect with BWA and project manager for the North Bank. "We're working in like five or six different types of basalt, fossils of local flora and fauna — even a petrified forest."

"Kids are going to be able to discover as they play, in the sand areas and as water moves through the playground," Hatch says. "They're going to be learning without even knowing they're learning."

Have you ever wondered why they call it Havermale Island? Named for an early Spokane settler, it's an island because of the Theme Stream, a feature created for Expo '74 that drains water from the slackwater south channel of the Spokane River back to the main channel, creating an island. Cascading down the side of the hill, under four bridges, the Theme Stream is one of the signature attractions of West Havermale and will get a full renovation in the coming year.

With Avista's Gathering Place and Huntington Park opening in 2014, and the Mobius Science Center in 2016, the western edge of Riverfront Park is more active than ever.

Another highlight of West Havermale is the Sister Cities Garden, just northwest of the Orange Bridge. The garden is home to art pieces from Spokane's sister cities — all of which are located on rivers. You'll also find Avista's historic power station in West Havermale, along with the Bill Fearn Conservation Area (the former site of the YMCA). Also opening next summer will be a fully inclusive playground brought to Riverfront by a grant from Providence Health Care.

Finally, the bond project's signature art piece, Stepwell, by architect and artist Meejin Yoon, will sit on a rise above the conservation area. Stepwell will be made of massive glue-laminated wooden beams, or glulam; it's another piece of art visitors will be invited to interact with inside Riverfront Spokane.

Ted S. McGregor Jr. is the publisher of the Inlander and was the volunteer chairman of the citizens advisory committee that developed the plan funded by voters in 2014. He is a current member of the Spokane Park Board.