Tired of aliens, Neill Blomkamp tries his hand with robots in Chappie

There's havoc in the streets

near the start of Neill Blomkamp's third science fiction film, the follow-up to District 9 and Elysium. But it's soon brought under control by robotic cops. Later on, there are numerous point-of-view shots from some of those robots. Still later, he introduces a big, bad robot called Moose that looks an awful lot like the iconic ED-209 from Robocop. A lot of this looks and even feels like Robocop. But while Blomkamp has admitted that Moose is a direct tip of the hat to ED-209, everything else feels quite original.

Except for the fact that Chappie isn't original. It's an expanded version of Blomkamp's 2004 short Tetra Vaal. This is something he likes to do; it's exactly what he did with his 2006 short Alive in Joburg, later turning it into District 9.

Blomkamp is back in Johannesburg with this one, and it's that city's streets that are overrun with crime, until the Tetra Vaal weapons company and its brilliant designer Deon Wilson (Dev Patel) comes up with the robot scouts who, alongside human police, patrol and clean up those streets.

Of course, things go wrong. The titanium scouts are effective, but not indestructible. A properly aimed missile or perfectly exploded bomb will send the remains of a scout back for reprocessing.

There are also human things going wrong. A trio of would-be thugs, Ninja and Yolandi (the South African rap-rave duo Ninja and Yo-Landi Visser, aka Die Antwoord) and Amerika (Jose Pablo Cantillo), get on the wrong side of some nastier thugs over a money dispute. Meanwhile, over at Tetra Vaal, CEO Michelle Bradley (Sigourney Weaver) is funding Deon's scout program by taking from the failed Moose program, headed up by former military man Vincent Moore (Hugh Jackman, sporting a mullet, speaking in his Australian accent). Vincent does not like Deon or his scouts.

There's a lot of setting up in this film, accompanied near the beginning and the end by furious, all-hell-breaking-loose action sequences that are, at different points, loads of fun and extremely violent.

It's a human story, it's a robot story, and it's a combination of the two. The bad-guy trio plan to find out who builds the scouts, steal what they're sure is a remote control, and turn them off, making it easier to commit crimes. Meanwhile, Deon has been trying to figure a way to give consciousness to his robots, to allow them to think for themselves. He steals a damaged, ready-for-reprocessing scout, and brings it home to work on. Wouldn't you know it, it's the same night that our idiot trio kidnaps him and his trashed scout.

Threats and deals are made and the robot, dubbed Chappie (Blomkamp regular Sharlto Copley in a terrific motion-capture performance), comes alive as a kind of robotic child, amazed and confused and a little scared of the new world around him.

Chappie keeps up with the human characters by clearly expressing himself via short bursts of words, very expressive ears and a mechanical unibrow. He's a friendly, gentle fellow that Ninja wants to turn into a South African gangsta (some good comedy leading to darkness results), while Deon just wants him to be able to think. Vincent, going the villain route, wants him destroyed so his Moose can go online.

Complications ensue as Yo-Landi starts developing motherly instincts toward him. Chappie wants to live, but in going for that dream, things turn even darker. Good news: Blomkamp somehow pulls off an out-of-left-field upbeat ending. Yes, there's a lot going on here, but it never lags. ♦

Chappie is not showing in any theaters in the area. 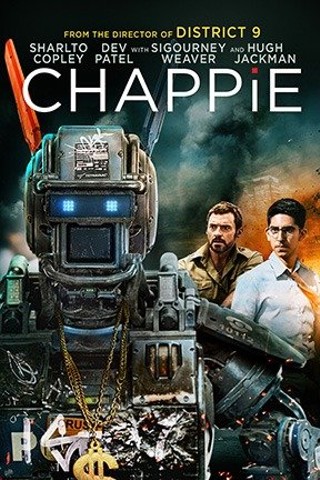