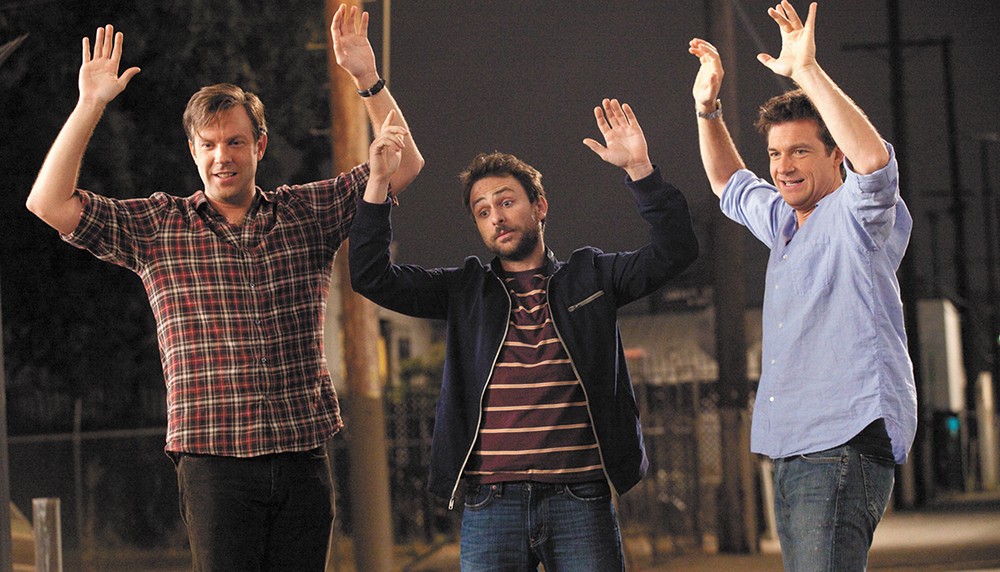 In the opening scene of Horrible Bosses 2,

our returning protagonist trio — Nick (Jason Bateman), Kurt (Jason Sudeikis) and Dale (Charlie Day) — appear on a happy-talk Los Angeles morning news show to promote their entrepreneurial idea, a shower head that includes a shampoo dispenser. Kurt stands in a makeshift shower in the studio to demonstrate the device, but darn it, the water won't work. So Dale goes behind the pebbled-glass shower to manually pump the water — in such a way that it appears his silhouetted form is performing a pleasurable act on his friend.

If that sounds like a hilarious gag — one that you didn't think was exhausted already after three different Austin Powers movies employed slight variations on that same theme — then boy, are you the audience for Horrible Bosses 2. Because here's a comedy built on a theoretical notion of outrageousness that actually paints within the narrowest possible notions of outrageous. Did they just go there? Well, of course they did.

Unlike the murder-based plot of the original film, this one involves crime with a slightly less permanent intended consequence. Seeking to raise funds for their business, our heroes turn to venture capitalist Bert Hanson (Christoph Waltz) and his son, Rex (Chris Pine) to get them started. But when Bert deliberately screws them on their deal — forcing them into a foreclosure where he can swoop in and cash in — the friends turn to an option that conveniently combines revenge with fiscal practicality: kidnapping Rex and using the ransom money to save their business.

Because it's part of the sequel package, Horrible Bosses alums Kevin Spacey (as Bateman's now-jailed ex-boss), Jennifer Aniston (as Day's sex-addict, man-eating ex-boss) and Jamie Foxx (as shady underworld contact Motherf----- Jones) also return, for reasons with varying degrees of plausibility. But it's really all about the chemistry between Bateman, Sudeikis and Day — and while everyone's mileage may vary, especially where Day is concerned, there's a terrific chemistry at work between them. Their overlapping nervous chatter has an almost musical quality, a three-part harmony of idiocy that's greater than the sum of the actors' individual parts. Throw in Pine's terrific work as a kind of paradigm of the entitled scion douchebag, and there's enough energy here to provide plenty of laughs.

What Horrible Bosses 2 doesn't bother bringing to the table is all that much creatively funny stuff for them to do. Co-writer/director Sean Anders (Sex Drive, We're the Millers) — taking over from director Seth Gordon and a writing team including John Francis Daley and Jonathan M. Goldstein — goes all-in on the gay panic humor after the aforementioned shower sequence, with gags predicated on prison rape and being horrified at being misunderstood to be gay, and so on and so forth. The climax involves an extended car chase with a couple of genuinely solid joke concepts, but the humor is predicated largely on the stars' frantic responses to situations that aren't particularly interesting. It's a movie dependent on mistakenly equating the hilarity of a scene with how loudly everyone in that scene acts.

But the bigger problem is that Horrible Bosses 2 is of that subgenre of comedies that pose as "transgressive," yet are in many ways deeply conservative. It may be naughty-sounding when the movie drops a punch line about sexual gratification through excretory functions, or a guy is berated for having "no balls," or when you get a handful of those gay-panic jokes, but it's not risk-taking. They're jokes you would have laughed at in middle school, thrown into an R-rated package.

That doesn't mean you're not going to laugh at some of those jokes — or maybe even more than some of them — especially if the cast clicks and bounces off one another like the main trio (plus Pine) do here. There's just a difference between a funny movie and funny people in a movie — and that difference is a script that makes more than a token effort. Horrible Bosses 2 counts on you chuckling at the suggestion that one guy is jerking another guy, when it's spending just as much time simply jerking around. ♦

Horrible Bosses 2 is not showing in any theaters in the area.