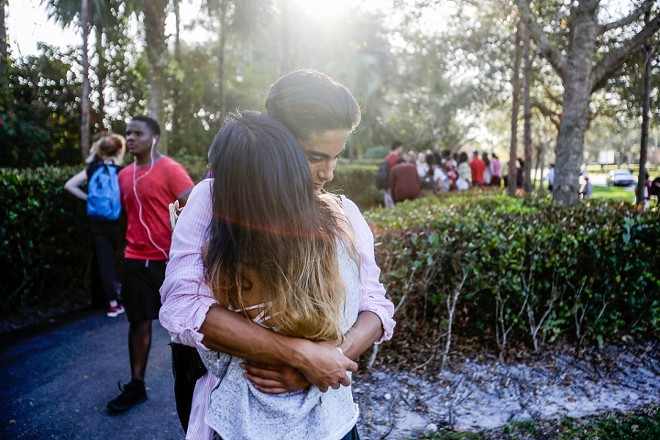 
PARKLAND, Fla. — Some students dreaded this moment. Some felt ready and defiant. Others just wanted to reunite with friends and be together again.


On Wednesday, the students of Marjory Stoneman Douglas High School were making an emotional return to the classroom, stepping inside the school where 17 people were killed and thousands of other lives in this South Florida suburb were irrevocably altered two weeks ago.

It was the first day of school since a former student armed with a semi-automatic rifle went on a shooting spree on a campus that is now guarded like a fortress.

For many, the day offered a chance for the student body to show its strength and unity after two weeks of nightmares, funerals, flashbacks, hospital visits, candlelit vigils and grief counseling. Many planned to wear burgundy T-shirts emblazoned with slogans like Douglas Strong and #MSDStrong.

But the return was disquieting. It meant they were actually going to sit in the classrooms where they had hidden during the shooting, and to linger in the courtyards where they had first heard the thunderclap of gunshots. They dreaded confronting so many empty seats, or seeing the art project that a slain friend would never finish.

Even to get onto the vast school campus again, students and their parents had to thread their way past heavily armed police officers and television cameras and pass through an exterior fence that is now decorated with banners of grief and condolence and garlanded with fading memorial flowers.

As they approached the school, the students walked past a phalanx of police officers from nearby cities and teachers from their old middle and elementary schools who waved signs of support.

The school has said it would have extra counselors to meet with students, and it will be days — if not weeks — before students return to their regular lessons. The school’s principal, Ty Thompson, said on Twitter that the focus of the week would be on healing, and classes are being dismissed at 11:40 a.m. for the rest of the week in an effort to let the students acclimate to being back.