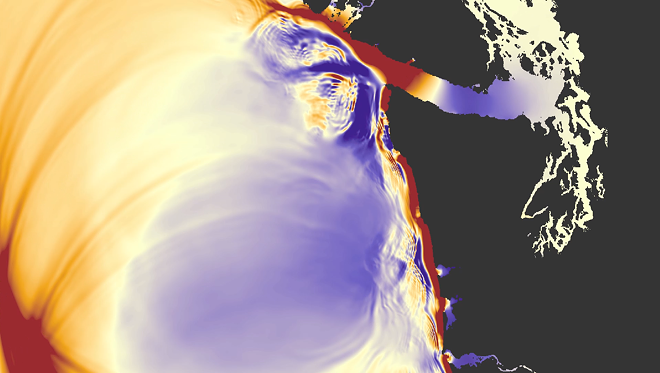 Within minutes of a magnitude 9 earthquake in the Cascadia subduction zone off the coast of Washington state, tsunami waves at least 10 feet higher than normal water levels could start their assault on coastal cities.

This week, the state Department of Natural Resources released video simulations that show the likely impacts and timing of tsunamis throughout Washington's coast if and when the next "Big One" hits.

Every 300 to 600 years, geologists have found, the zone has a "megathrust" earthquake (aka "the Big One") as the Juan de Fuca tectonic plate pushes under the North American plate, DNR reports.

It's been 319 years since the last megathrust quake hit the zone in 1700, and "produced a tsunami that left sand deposits and drowned forests, which can still be seen in places like the Copalis Ghost Forest in Grays Harbor County."

“We know tsunamis will hit our state. It’s a question of when, not if, which means we need to prepare now," Commissioner of Public Lands Hilary Franz says in an announcement about the new videos. "Our hope is that these stark videos drive home the need for communities to take action to become more secure and resilient."

(This video was embedded to start just before the simulation. Watch from the beginning for explanations of the time scale in hours, minutes and seconds and what the wave colors mean).

The video simulations show that as soon as 15 minutes or so after a quake centered in the zone off the peninsula starts, the entire Washington coast (and beyond) would be hit with the earliest waves, which would then force their way into the Puget Sound.

From there, even areas protected from the harshest waters of the Pacific Ocean by the natural land barriers of Vancouver Island and the San Juans would also be impacted with tsunami waters that could reach their shores within about two and a half hours of the quake.

(This video was embedded to start just before the simulation. Watch from the beginning for explanations of the time scale in hours, minutes and seconds and what the wave colors mean).

For more, find the other videos on DNR's YouTube page and find more information on tsunami evacuation maps and preparation on DNR's website.