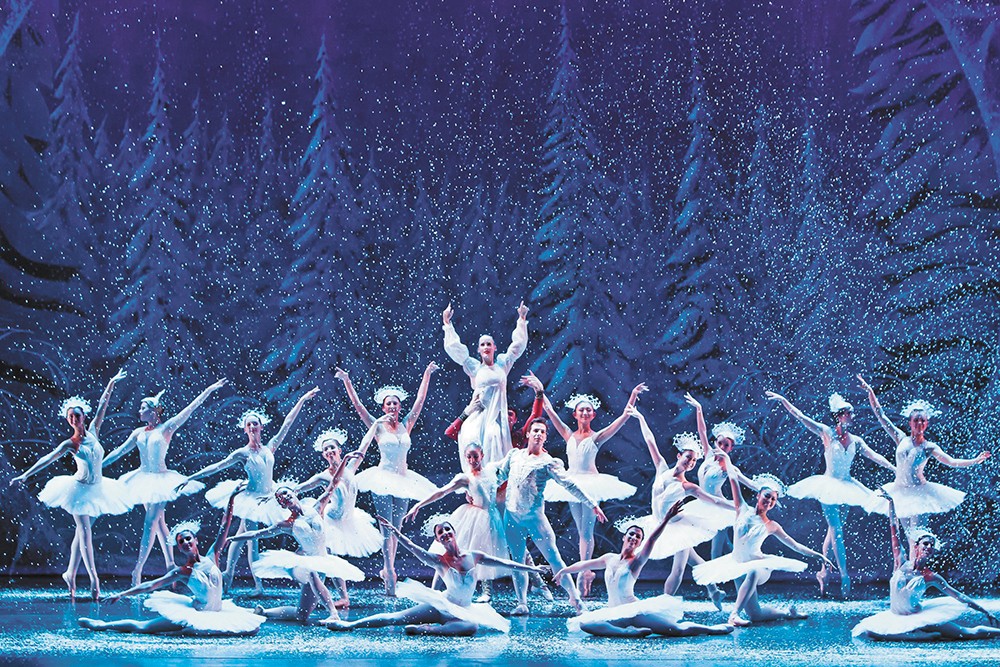 Catch The Nutcracker with the Spokane Symphony Dec. 5-8.

Whether you're a devotee of the 1983 movie or just a casual fan, this acclaimed stage adaptation sticks fairly close to the original while adding songs and choreography for that little something extra. There's Ralphie, of course, who wants nothing less than an Official Red Ryder carbine-action 200-shot Range Model air rifle under the tree. And then there's his fussy kid brother, the pink bunny suit and the leg lamp fiasco. All of those beloved characters and memorable moments get some Broadway-style razzle-dazzle with numbers like "Ralphie to the Rescue!" and "It All Comes Down to Christmas." Lake City Playhouse, $25, Thu-Sat at 7:30 pm, Sun at 2 pm, lakecityplayhouse.org

A classic song-and-story evening hosted by Ellen Travolta, Christmas Miracles draws on heartwarming personal anecdotes submitted by members of the public. They might be funny, inspiring or even bring a tear to your eye, but they all revolve around the surprises and coincidences that seem extra special when they take place during the holiday season. This marks the show's seventh year and, as always, it features some of the most renowned talent in the local performing arts community, including singer Abbey Crawford, director Troy Nickerson and bassist Eugene Jablonsky. Optional room packages (from $249) include two show tickets and a $50 dining credit. Coeur d'Alene Resort, $27.50, Thu-Sat at 7:30 pm, Sun at 5 pm, cdachristmas.com

During the holiday season, it's not uncommon for folks to step back and take some time to reflect on the things they're grateful for. And few stories are better at prompting that exercise in gratitude than It's a Wonderful Life. This is the story of small-town everyman George Bailey, who, in the depths of his despair, is shown how the small acts of selflessness throughout his life have made the world a better place. The fact that his epiphany takes place on Christmas Eve makes it all the more poignant. Marianne McLaughlin directs. Spokane Civic Theatre, $35, Thu-Sat at 7:30 pm, Sun at 2 pm (no show Nov. 30), spokanecivictheatre.com

"'Twas the night before Christmas, when all through the house / Not a creature was stirring, not even a mouse." You can almost certainly recite the opening lines (and other verses) of Clement C. Moore's famous poem. But what's the story behind it? With a cast of both child and adult actors along with some fun creative liberties, Spokane Children's Theatre dramatizes how Moore drew inspiration from the seasonal sights and sounds to create this enduring holiday poem. The matinee on Dec. 1 is an ASL-interpreted performance. Spokane Children's Theatre, $12-$16, 4 pm (Nov. 29 only), Fri at 7 pm, Sat-Sun at 2 pm, spokanechildrenstheatre.org

Morihiko Nakahara conducts the Spokane Symphony in this annual production of Tchaikovsky's ballet, which traces its origins back to a whimsical holiday-themed novella by E.T.A. Hoffman titled The Nutcracker and the Mouse King. While the symphony performs instantly recognizable pieces like the twinkly "Dance of the Sugar Plum Fairy," dancers from California's State Street Ballet make the choreography's challenging pas de deux look effortless. More than 75 local dancers from across the Spokane area also participate. Martin Woldson Theater at the Fox, $19.50-$82, Thu-Sat at 7:30 pm, Sat-Sun at 2 pm, spokanesymphony.org

We've all got our favorite holiday tales. For some it's Frosty or Rudolph, for others it's The Grinch Who Stole Christmas. And as much as we love them, it's awfully nice to see them in a different light every now and then. In its weekly, all-ages Season's Greetings show, Blue Door Theatre's improv troupe takes the classic stories you suggest and reinterprets them through the filter of reality TV. Think A Christmas Carol in the style of Ghost Hunters. Elf reframed as The Bachelor. Or The Nutcracker if it were Dancing with the Stars. This improv show runs every Friday throughout December. Blue Door Theatre, $8, Fri at 7:30 pm, bluedoortheatre.com

Adam Trent has a magic touch.

Adam Trent thinks the holidays are a magical time. In fact, he wants to make them even more magical — by adding, well, more magic. His upbeat holiday-themed production features high-tech effects as well as interactive illusions that involve plenty of audience participation. Until launching his own touring show, Trent was most recently known for his work on the Broadway hit The Illusionists, and his musical guest star has her own high-profile claim to fame. Known for her angelic voice, teenaged singer/songwriter Evie Clair was a finalist on America's Got Talent in 2017. Bing Crosby Theater, $25-$40, 2 pm and 7:30 pm, bingcrosbytheater.com ♦