The #MeToo movement is like a giant Squeegee scrubbing the dirt

out from under the carpet and the scum off the sink. It's a healthy outpouring of secrets, shame, hurt and anger. Facebook and other social media are clearly empowering women in a way never before possible.
click to enlarge 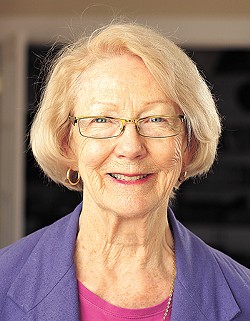 For power is what the issue of sexual misconduct is all about. Men in general outweigh women in brawn, money and influence. The boss is power in the workplace; the millionaire has the power of the dollar; the elected official exudes power. Young women are vulnerable and powerless.

In 1991, during the confirmation hearing of Supreme Court Justice Clarence Thomas, Anita Hill was talked into appearing before the Senate Judiciary Committee to tell her story of being sexually harassed by her employer, the nominee, Clarence Thomas. She was a lone, young African American female appearing before an all-male, all-white Senate committee. She stood her ground. Clarence Thomas made a vehement denial, claiming he was being subjected to a "high-tech lynching for uppity blacks."

The majority of the all-male Senate committee believed Clarence Thomas's denial. He was confirmed by the full Senate by a vote of 52 to 48 — close, but enough to give him the job for life.

I remember attending a national women's convention for state legislators sometime later. We middle-aged, supposedly respectable female legislators found ourselves literally standing on our chairs at the dinner table, clapping and waving our cloth napkins in the air in wild enthusiasm for our dinner speaker, Anita Hill.

The #MeToo Movement has brought the now Brandeis University Professor Anita Hill back into the news front — along with a new movie telling her tale.

Anita Hill's valiant action laid a strong tile on the road to a new cultural ethic. Boys may be boys, but real men respect every woman's right to freedom from sexual misconduct.

And social media, with all its drawbacks, is playing a positive role in the balance of power. ♦

We humans will need to change to preserve biodiversity

Making sense of what happened in North Idaho on Nov. 6