As enrollment grows, area schools plan to solve the problem of overcrowding 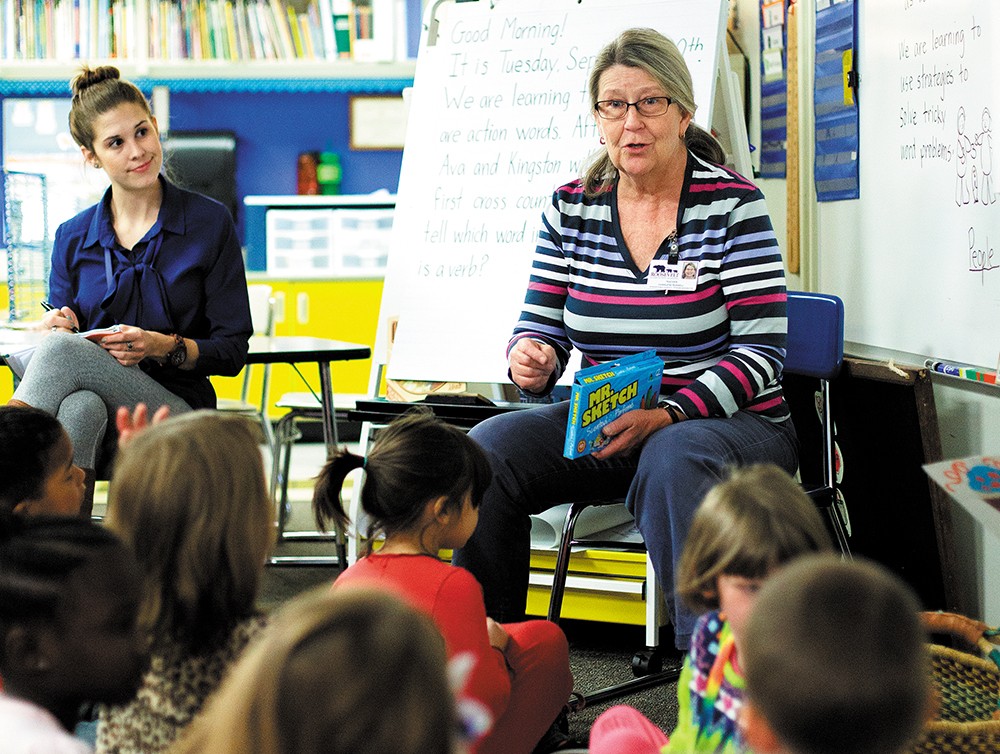 n 2003, Spokane Public Schools came up with a long-term plan to replace and modernize old schools. At the time, enrollment was on a downward trend — from 1998 until about two years ago, the enrollment dropped from 32,000 kids to 28,000.

That's changed. Enrollment, in Spokane and particularly other local school districts, is increasing, says Mark Anderson, the district's associate superintendent. Coupled with a mandate to meet a state initiative to lower class sizes in kindergarten through third grade, Spokane has had to adjust its plan and start preparing for its next bond measure, less than two years after the previous one.

"As you can see," Anderson says, "we've started early."

Most of the district's elementary schools are nearing capacity, Anderson says. There are space challenges all over the district — the South Hill, up north and to the east.

And Spokane is not alone. The Central Valley School District is also trying to keep up with increased population growth that has led to overcrowding. In 2018, the district plans to ask voters to approve a bond for a new high school and middle school.

"Overcrowding is a significant issue," says Brian Singer, co-chair of CV's Capital Facilities Committee. "It's a reality for our community and how quickly it's growing."

For districts like Central Valley and Spokane Public Schools, major changes lie ahead, including an influx of new school buildings, boundary changes and — for Spokane — reconfigured grade levels.

erena McPherson has two kids at Moran Prairie Elementary School on the South Hill. In March, Anderson came to the school and told parents that Moran would be taking some kindergarteners from Mullan Road Elementary. With more multifamily apartment complexes popping up on the hill, Mullan Road was becoming overcrowded, Anderson explained.

McPherson and other parents were worried. They saw the other plots of land ready to be developed. They were concerned about the district's long-term plan. Would the overcrowding get worse?

"Parents were upset with the district because they felt like there was a lack of communication," she says.

But the district alleviated some of those concerns. McPherson and other parents joined a long-range growth planning committee considering options for what kind of new schools will be needed in the 2021 bond.

Anderson says meeting the voter-approved state initiative to lower class sizes in grades K-3 down to 17 students would, alone, require up to five new elementary schools. The planning committee McPherson is a part of considered options on how to change grade configurations, including whether to move sixth grade to middle school, or eliminate middle schools and move to a K-8 model.

By the end of the school year, the grade configuration committee concluded that the best way to solve overcrowding in elementary schools was to move sixth grade to middle school. In June 2017, the school board voted in favor of the idea, which received overwhelming parent and staff support. The decision means Spokane will have to build fewer facilities to solve overcrowding than other grade configuration options.

The transition to a new grade configuration will coincide with the 2021 bond. From 2021 to 2027, the plan will be fully implemented.

"This won't happen overnight," Anderson said at the June board meeting.

entral Valley went nearly 20 years without passing a bond for facility upgrades. But after passing its most recent bond in 2015 — which paid for three new elementary schools, two new middle schools, and renovations and expansions for several other schools — the district is optimistic about passing the next one in 2018.

The $130 million bond proposal in 2018 would pay for a new high school, a new middle school, and a renovations to a current middle school. Like the 2015 bond, it won't raise taxes for Valley residents. Instead, the 2018 bond would replace the tax rate of a previous bond that is set to expire.

Singer, co-chair of the district's capital facilities committee, says that people clearly see the need for a new high school. When Central Valley and University high schools were built, they were supposed to hold about 1,600 students each. Now, there are more than 4,200 high school students between the two schools, he says.

A new high school of roughly the same size as the other two would solve the problem of overcrowding at the secondary level and allow for future growth. Singer says the new school would be finished by 2021. It would be located at 16th Avenue and Henry Road, a vacant piece of land between Spokane Valley and Liberty Lake.

Singer, having been on the capital facilities committee when Central Valley couldn't pass a bond, says he's appreciative of the community's support after passing the most recent bond that paid for new elementary schools: "Having them provide that trust in the district has made a huge difference."