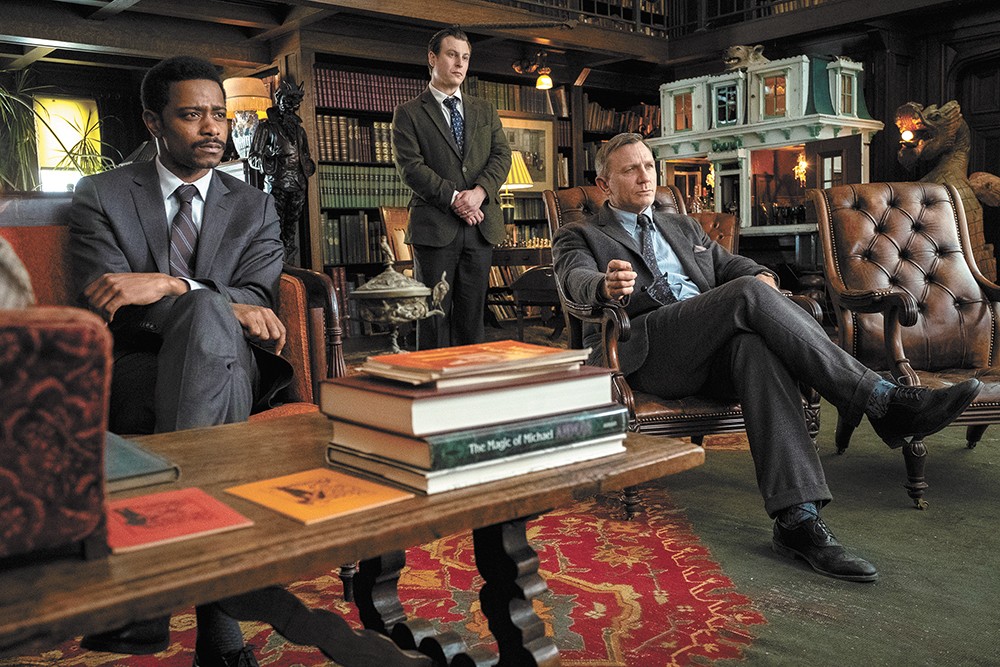 A who's who of stars headline the whodunit Knives Out.

Watching Rian Johnson's Knives Out, I was reminded of my middle school English teacher Mrs. Soderbergh, who loved Agatha Christie books almost as much as she loved diagramming sentences. There was a week when she brought in a box stacked high with her own Christie paperbacks, set it down in front of the classroom and had each of us pick a book based solely on the plot summary on the back. After we read our selections, we had to summarize it to the class without giving away the solution of the mystery.

So I'll apply the same strategy in reviewing Knives Out, which demands that its third-act twists be kept secret. Mrs. Soderbergh probably would've enjoyed the movie, which feels like the work of someone who has read his fair share of Christies and took exhaustive notes in the margins. But I'm sure she would have also described its central mystery as somewhat "insipid," a word I recall her using with great regularity.

Anyway, the movie contains all the requisite building blocks of a classic whodunit — an isolated country estate, a death with questionable circumstances, a wide pool of suspects and a quirky detective with unorthodox methods. The house in Knives Out, which comes complete with spires and sprawling porches and guard dogs and always seems enveloped in fog, belongs to Harlan Thrombey (Christopher Plummer), one of the best-selling mystery authors of all time. The film opens on the night of his 85th birthday, when he's surrounded by his self-absorbed, ever-sniping family, each of them more insufferable than the last.

Harlan is found dead in his study early the next morning, having slit his own throat with a dagger, though the crime scene has some inconsistencies that suggest foul play. And besides, doesn't it seem fishy that Harlan would end up dead on the very night he had a closed-door argument about the contents of his will?

Enter our detectives — a straight-shooter (Lakeith Stanfield) from the local police precinct, and the brilliant, unconventional private dick Benoit Blanc (Daniel Craig with a shaky Foghorn Leghorn accent), who has been summoned to the scene by way of a mysterious envelope of cash. They immediately turn their attention to Harlan's longtime caregiver Marta (Ana de Armas), who worries a criminal investigation could draw attention to her mother, an undocumented immigrant. She also has a strange but helpful condition that causes her to vomit whenever she's not telling the truth, making her something of a human lie detector.

While she seems the most reliable, the most obvious suspects appear to be Harlan's grown children: his eldest daughter Linda (Jamie Lee Curtis), a real estate magnate, and his son Walt (Michael Shannon), who oversees his father's publishing empire. There's also the matter of Harlan's cocky grandson Ransom (Chris Evans), who assumes he'll be inheriting his family's vast wealth. And there's also Linda's pigheaded husband (Don Johnson); his widowed sister-in-law (Toni Collette), who runs a new age healthy-living corporation a la GOOP; Walt's teenage son (Jaeden Martell), described as an "alt-right troll dipshit;" and Harlan's seemingly ancient mother. ("How old is she?" someone asks. "Nobody knows" is the response.)

Of course, the very nature of the whodunit dictates that most of this will turn out to be needless information, extraneous details meant to throw us off the scent. But it doesn't really matter, because the true pleasure of Knives Out is in simply watching these actors tear into their boorish roles — and into Johnson's brisk, colorful dialogue — with relish. This belongs to that esteemed subgenre of movies about rich white people yelling at each other in luscious cable-knit sweaters.

After the big-budget sci-fi of Looper and The Last Jedi, Johnson is back in the territory of his earliest films — the moody high school noir Brick (2005) and the quirky heist comedy The Brothers Bloom (2008). As in those efforts, Knives Out features nods to other, better movies — 1985's Clue, the 1976 spoof Murder by Death, and even 1973's overlooked The Last of Sheila, an all-star murder mystery with a dark comic edge. All the weird figurines and statues littering the Thrombey mansion recall the classic two-hander Sleuth, and it also conjures comparisons to Christie adaptations like Death on the Nile (1978) or The Mirror Crack'd (1980), which had arch sensibilities bordering on camp.

As a mystery, Knives Out is merely OK. It's difficult to pinpoint the deficiencies of its payoff without spoiling the whole thing, but what I'll say is that the explanation — delivered at the end in a long, breathless monologue — is almost too straightforward, too clean. We keep waiting for that additional twist atop the twist, but there really isn't one. As an evisceration of awful one-percenters, on the other hand, it works brilliantly, and its final shot is as satisfying as a good punchline. ♦

The original print version of this article was headlined "Family Plot"