If Jeshua Anderson becomes an Olympian, the Inland Northwest's new favorite sport might be track. 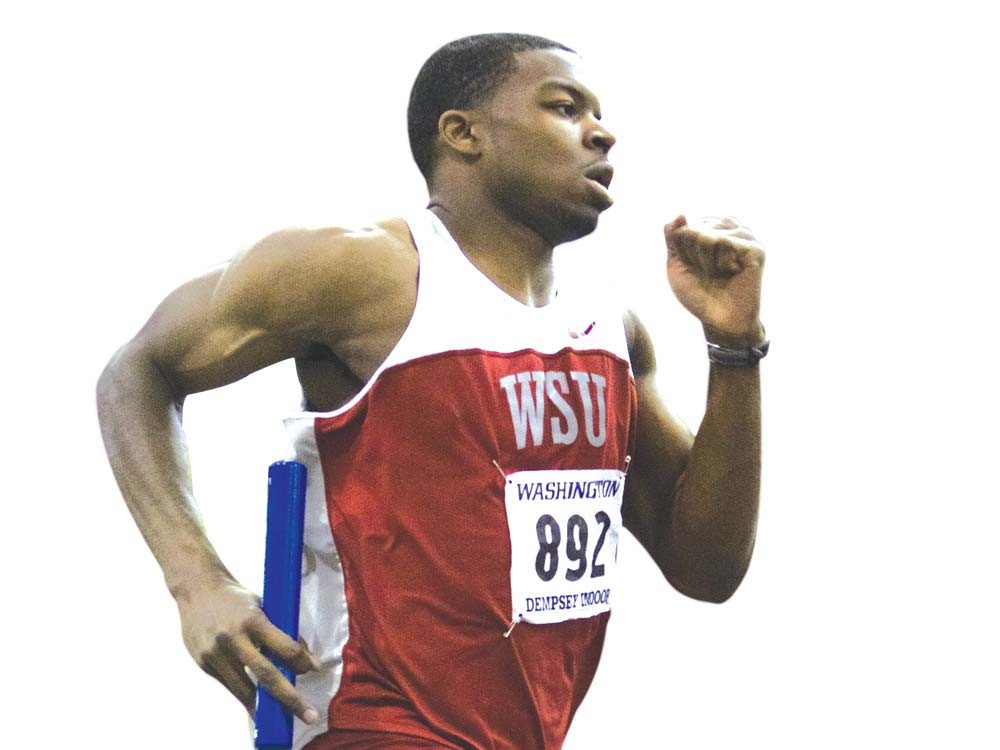 Jeshua Anderson speaks slowly. Purposefully. Almost painfully. When he makes his way around the Washington State campus, he walks in the same manner. Until, that is, he reaches Mooberry Track.

Then Anderson transforms into one of the most dynamic athletes in Pacific Northwest history. And yet, still, many local sports fans are saying to themselves, “Jeshua WHO?” Such is the fate of virtually all track-and-field athletes in the United States, particularly those who are not Olympic gold medalists.

And Anderson is not an Olympic gold medalist. Yet.

Check back with him next summer. That’s when the Olympics will be held in London, and Anderson is a good bet to be there, proudly decked out in red, white and blue.

That’s the plan, anyway. First, Anderson says, he’s taking aim at the all-time college and NCAA meet records in the 400-meter intermediate hurdles when he guns for his third NCAA championship this Friday in Des Moines, Iowa. (He won this event as a freshman and sophomore before finishing second last year.)

“God willing, I’ll do something that is very memorable and record-breaking,” he says.

Anderson has been both memorable and record-breaking with stunning regularity during his four years at Washington State. He’s shattered his own school record repeatedly, most recently at the Pacific- 10 Conference Championships. His fourth straight title came in a meet-record time of 48.13 seconds that ranked fifth in the world this year behind four times of South African professional L.J. Vanzyl.

Anderson’s résumé is impeccable. He owns national and world junior titles; won an international meet for athletes 22 and younger last year; and he set the national high school record of 35.28 seconds in the 300 intermediate hurdles as a senior at Taft High in Woodland Hills, Calif. (in Los Angeles’ San Fernando Valley).

But as good as Anderson is, he needs monumental improvement to break the collegiate and NCAA meet records (47.10 and 47.56, respectively).

Anderson was a fleet wide receiver — and a good one — at WSU before quitting football early in his junior year to concentrate on track. He still talks about possibly combining professional careers in track and football after the 2012 Olympics.

“I love playing football,” says Anderson, who played at about 6-foot-2 and 190 pounds. “That was my first sport.

“I always approached track with that football mentality and competitiveness. Football did a lot for me.”

Anderson’s unassuming manner serves him well in a sport that usually draws miniscule crowds in the United States. He’s excited about turning pro this summer in Europe, where the interest, endorsements and pay in track-and-field is far greater than in the United States.

Still, Anderson says he enjoys Pullman so much, he plans to stay there to train for the Olympics with highly respected WSU hurdles coach Mark Macdonald. Anderson says he might even want to run a business one day in Pullman.

“Coug fans are the best fans,” he says. “I appreciate the support.”

Anderson considered turning pro last summer, but he now says it was “a blessing in disguise” to return for his senior year. A nagging hamstring problem that bothered him for two years has cleared up, and he’s excited about competing this week at Drake (University) Stadium, where he won his first NCAA championship in 2008.

“I feel good about my chances of winning another title,” he says. “That’s definitely on my mind. It’s on my checklist along with breaking a few records.”

NCAA Division I Men’s and Women’s Outdoor Track and Field Championships • Men’s 400-meter intermediate hurdles finals stream live on NCAA.com on Fri, June 10, at 4:45 pm, and possibly on CBS College Sports at 4:30 pm and on KREM at 10 am on Saturday.

Speaking of Sports , Track And Field