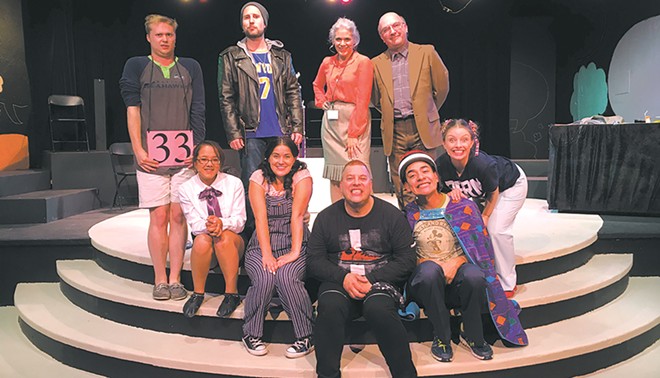 The cast of the 25th Annual Putnam County Spelling Bee, the Modern's first production of the season.

Lance Babbit freely admits that he was "never a great speller."

But something about The 25th Annual Putnam County Spelling Bee has appealed to him ever since the musical first hit the stage in 2005. Maybe it's the show's almost giddy delight in the eccentricities of language. Maybe it's the way the characters embody the awkwardness and tribulations of youth. Then again, maybe it's the seat-of-your-pants unpredictability that comes with audience participation, which is "like throwing four sticks of dynamite into a controlled environment."

For Babbit, the production of Spelling Bee that opens Friday evening at The Modern Coeur d'Alene is also a career milestone. As a teenager, he got his start on this very same stage in 1980, back when Coeur d'Alene Summer Theatre — still a repertory outfit at the time — made use of the space in the off-season. During the venue's years as Lake City Playhouse, he performed there in dozens of shows. Now, for the very first time, he's trying his hand at directing.

"I was kind of nervous," Babbit says, "but it's been really very enjoyable getting to do a show that I did for a very long time."

He was part of the six-month "long run" production at the Spokane Civic Theatre that went all the way to the 2011 AACTFest competition in Rochester, New York. He also performed in a Salt Lake City-based production in 2013. "I have a history with this show," he adds, as if euphemistically describing a topsy-turvy relationship.

And he has the anecdotes to prove it. Like the time a random audience participant showed an uncanny ability to spell even the nonsense words that the script uses to disqualify these pseudo-contestants. Or the time that his own lackluster spelling ability caused him to flub a word that the story demanded he get right. Fortunately for him, the rest of the cast just played along. "So many audience members came up to me after the show and said, 'You know, you spelled that wrong.'"

Much like his new directorial role, his time as a cast member in Spelling Bee offered him a new perspective on things he thought he knew.

"It's kind of a painful show to do because you have to really open up a very nested part of yourself to play a 9-year-old every night. Not everybody wants to go back to those days. And having played the bully when I did the show, it was very insightful for me to see that there are two sides to everything."

For the current production, Babbit is overseeing an experienced cast that includes Jeremy Whittington, Trigger Weddle, Marlee Andrews, Brandon Montang, Robby French, Aubree Peterson, Alliyiah Gorman and Brendan Brady, all familiar faces among the local theatrical community. He's working with them and the design team to introduce "a slightly harsher edge" to an oft-performed piece of theater.

"We've worked really hard to make the show more modern — not trying to do what I knew would work, but trying to experiment and find new things that would still keep the show fresh and alive," Babbit says. "In the original production, [the characters] are kind of antiseptic-looking in my mind. We've taken one character and he's now slightly early goth and emo-y, whereas before he was just the bully."

Yet Spelling Bee in any form "is a perfect evening of theater," Babbit says. "It's hysterically funny and ultimately sweetly moving. You'll laugh a lot and you'll leave the show teary-eyed. As a theatergoer, that's my perfect bite of dinner — a little bit of everything." ♦