Hockey fans packed into the Hub Tavern on North Monroe for the NHL Expansion Draft, eager to find out which players the Seattle Kraken would plunder from other teams. Many wore Kraken gear, though plenty of diehard fans still sported their hometown sweaters, and the bartenders wore T-shirts printed just for the occasion: an image of the legendary sea monster with the tagline "Tentacle Festival 2021."

"We knew that we wanted to be part of it, so we did contact the team and let them know that we're Spokane's hockey bar, and we wanted to help them launch the team here on the east side," said Dave Richardson, who co-owns the Hub Tavern with his wife, Mona, their son Buddy and their daughter-in-law Lea, all equal partners. "We weren't able to hold our annual New Year's Day 'Winter Classic' party, so we decided to have a version of that in July."

Hub regulars arrived three hours early to get a seat and traded predictions during the leadup to the main event. Despite news reports leaking some picks, most fans said they didn't want to know and would rather be surprised. Amid the general din, one woman taped a goalie stick, and two men debated whether the Kraken should take St. Louis Blues' winger Vladimir Tarasenko. "Are you insane?" one said. "They'd be crazy not to take him!" (They didn't.) Outside, fans shot pucks at an empty net, competing to see who could hit the most targets and ribbing each other over bad shots. Later, a bar-wide game of hockey trivia was held, with prizes for the winners (Q: Who did the Seattle Metropolitans beat when they became the first American team to win the Stanley Cup in 1917? A: The Montreal Canadiens.)

Spokane Chiefs mascot Boomer made an appearance, posing for photos with fans, while staff from the Spokane Chiefs talked about which NHL players had originated from the Western Hockey League. Tim Ryan, father of Spokane-born NHL player Derek Ryan, was in attendance, as was Spokane Chiefs President Mark Miles.

Many expressed excitement about how the Kraken will positively impact hockey statewide. "I think it's going to be phenomenal," Richardson said. "We already have a great youth hockey movement going on in Spokane, and this is only going to create a greater appreciation for the sport and sportsmanship."

Buddy Richardson, a Colorado Avalanche fan, riled up the crowd with a hand-cranked air raid siren that was so loud his mother begged him to stop. Despite the excitement of an NHL team in Washington, he wasn't impressed by the Kraken's initial draft picks. "They will not make the playoffs in the first year," he predicted. "They won't." My sister agreed, but then her fiancée piped up. "Fifty bucks they do," she said with a grin.

More intrigue is yet to come. The expansion draft allowed the Kraken to select 30 players, which they'll need to whittle down to a 23-man roster before the season begins. Between now and then, the Kraken will likely use their significant cap space (roughly $29 million) to secure a few high-impact players through free agent signings or trades. That means the roster could look very different by the time the Kraken play their inaugural preseason game in Spokane, against the Vancouver Canucks. That game, Sept. 26 at the Spokane Arena, sold out in 43 minutes.

After all the picks had been announced and the festivities wound to a close, Richardson announced the raffle results, explaining that the proceeds would be donated to a local charity. "You raised over $1,000 for youth hockey scholarships!" he bellowed.

The original print version of this article was headlined "The Kraken: Released" 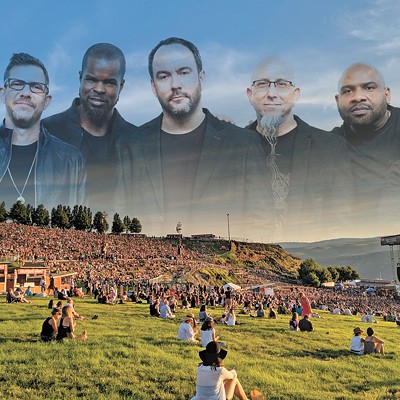