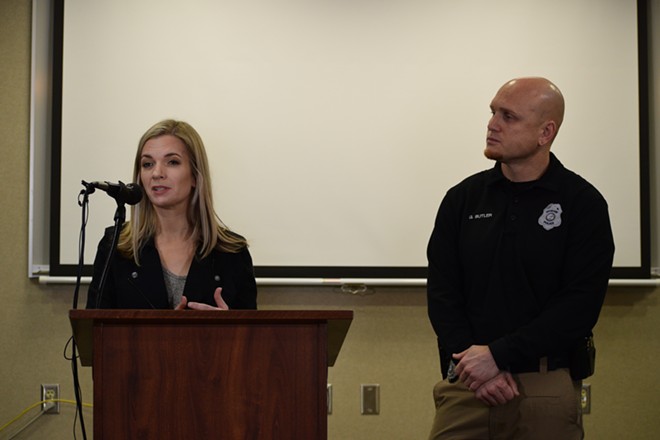 Wilson Criscione photo
Carrie Christiansen (left), a nurse with Eastern State Hospital, came up with the idea to bring police into the hospital with Graig Butler, a community resource officer with SPD.

A new program through Eastern State Hospital and the Spokane Police Department could help reduce violent interactions between police and people with mental illness, officials with SPD and the Department of Social and Health Services say.

The program, called Community Outreach with Patients through Affirmative Law Enforcement Conversations, or COP TALK, brings SPD officers into Eastern State, where they are able to build relationships with patients and educate them on how to respond to law enforcement. Patients can also agree to provide information regarding medications and their diagnosis upon their release to form an individualized response plan that officers can use when responding to calls.

It's part of the police department's goal to "start to shift the paradigm" away from people with mental health problems having traumatic experiences with police, says Spokane Police Chief Craig Meidl.

"We can get those calls resolved in a much quicker and a much more safe environment," Meidl says.

Meidl added that he's not aware of any other program like this in the nation.

The idea for it began roughly a year and a half ago. Carrie Christiansen, a nurse at the Eastern State, says she was constantly hearing from her patients about their negative experiences with police.  She decided to become a reserve SPD officer to see these interactions up close, and while she was riding with an officer named Graig Butler, they discussed bringing him into the hospital to meet some of the patients.

Butler initially didn't wear his uniform because it was a possible barrier for patients. In plain clothes, he started to build relationships with them over the course of several months for a few hours per day. He eventually developed a curriculum to educate patients on how to interact with police. The course teaches patients things like why officers demand compliance, and that the fact that they are in handcuffs doesn't automatically mean they're going to jail.

Butler says that now, he walks into the hospital in full uniform and patients are happy to see him.

"There's no hesitation any longer," he says.

"[They're] able to interact in a positive way and in a social way, not just in a law enforcement way," she says.

Butler teaches the course at Eastern State with another officer. Any patient is able to participate.

Eastern State also recently implemented the Safe Hand-Off program, which is an extension of COP TALK. Under the program, patients will have a police representative to assist their transition to the community and can voluntarily provide information when they're released from the hospital that would form an individualized response plan. Police would then have access to that information when responding to calls involving that person. Butler says the goal is to eventually provide that information to all officers in order to reduce use-of-force incidents.

Meidl says he gives credit to Christiansen and Butler for coming up with the idea. He says the department will take what it's learning from the program and "disseminate that in the rest of the department as well."

"It's just another way we can ensure their success long-term in the community," Kettner says.

When Christiansen and Butler came to him with the idea, he said "let me get out of the way and let you guys go with that."

"It was very simple for me," he says. "It's incredibly inspiring to see how they can take this program and run with it and the success they've seen — and overwhelming support with patients as well."