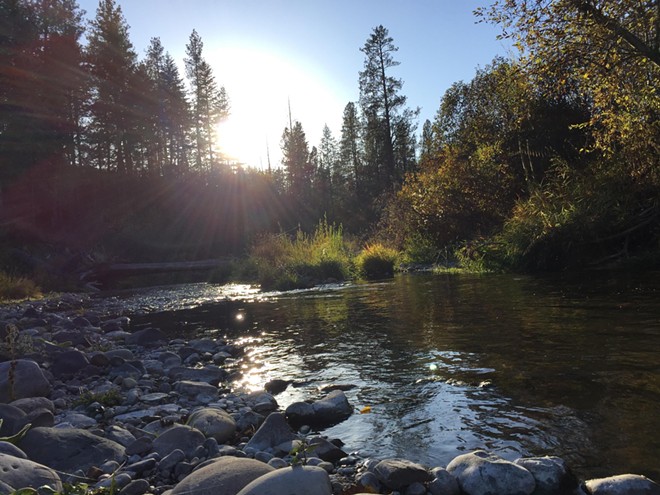 A more than 40-year battle over water use along Chamokane Creek has come to an end with an agreement between the Washington state Department of Ecology, the Spokane Tribe of Indians and the federal government.

"The agreement centers on a mitigation program that will improve streamflows for fish, allows existing water uses to continue, and provides water for future domestic needs in Stevens County, and on Spokane Tribal lands," Ecology announced earlier this month.

If approved by the courts, the mitigation and settlement will protect the tribe's water and fishing rights for generations to come, Spokane Tribal Business Council Chairwoman Carol Evans says in the announcement.

"The Spokane Tribe is very pleased with the settlement agreement reached between the state of Washington, the Tribe and the United States over specific issues within United States, Spokane Tribe of Indians v. Anderson," Evans says. "The settlement is a culmination of four years of mediation between the parties and it addresses several issues that have caused water management problems within the Chamokane Creek Basin since the case was adjudicated in the late 1970s."

According to Ecology's announcement:

Under terms of the agreement, Ecology will provide mitigation to offset the impacts of existing and future domestic water use. A program will be stablished to improve stream flows and temperatures, allowing fish to migrate upstream. The program will be largely funded by Washington state through Ecology, with cooperation and support from the Spokane Tribe and Bureau of Indian Affairs.

"We are thrilled this landmark water agreement has been reached," said Ecology Director Maia Bellon. "A combination of creative thinking and sound science has resulted in a solution that improves temperature and streamflows for fish while ensuring current and future domestic water use."

Historically, impacts of permit exempt domestic wells and stock water uses along Chamokane Creek were considered so small that they did not need to be regulated and were allowed by the state. However, over the past 40 years, scientists have gained a better understanding of how groundwater pumping from wells can impact stream flows in the Chamokane basin.

In the 1970s, the U.S. District Court for Eastern Washington, United States and Spokane Tribe v. Anderson, established that the Spokane Tribe has a senior water right to Chamokane Creek to benefit culturally important fisheries

Litigation and conflict continued in the intervening years, until the federal court ordered the parties to conduct a study, which found a connection between surface and groundwater in the area. Recently, rather than continue litigation, all parties agreed to settle and improve streamflows with a mitigation program.

Chamokane Creek flows along the eastern margin of the Spokane Indian Reservation in Stevens County. Water rights in portions of the 179-square-mile basin were adjudicated in 1979, and oversight of water rights in the basin are within the jurisdiction of the federal court.