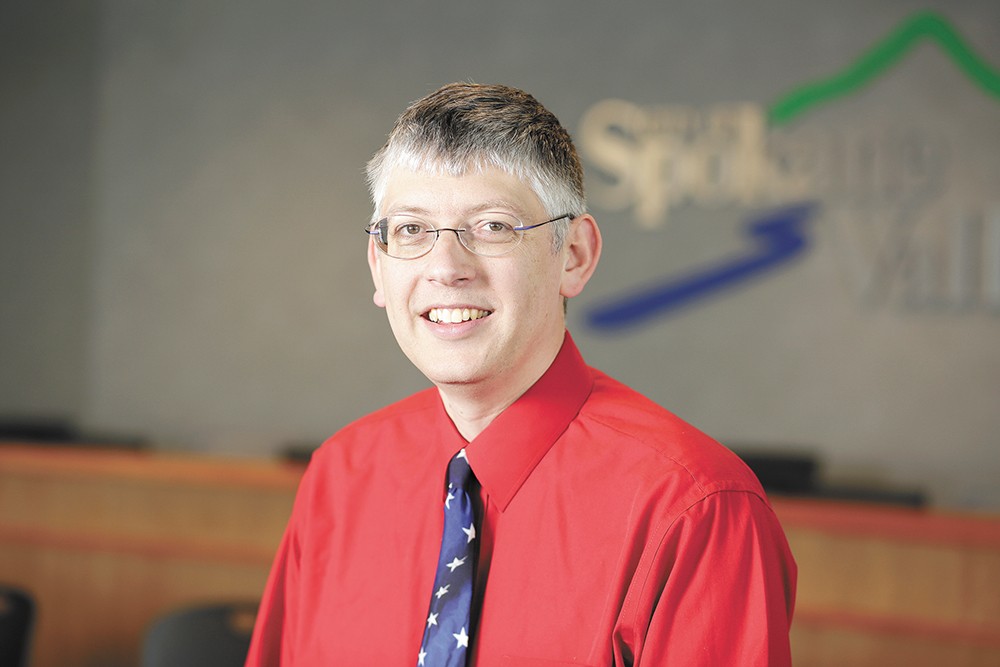 Young Kwak photo
Ben Wick, Spokane Valley's new mayor, is the publisher of two community newspapers and works as an IT manager for Spokane Industries.

Spokane Valley isn't exactly known for political moderation. If anything, it's known for the opposite. Its elected city officials have flirted with the idea of splitting off Eastern Washington from the rest of the state and publicly opposed allowing transgender people to use their preferred bathrooms. Then there's Rep. Matt Shea, a longstanding Republican Spokane Valley state lawmaker who was recently accused of engaging in "domestic terrorism," according to a damning investigation.

So it was unusual when an established local lefty organizer testified before the Spokane Valley City Council at a Jan. 14 meeting, lauding its new leadership.

"I just wanted to say how pleased I am that we have new leadership and how excited I am to see the changes that will be coming forward," said Jeff Beaulac, an organizer with the local criminal justice reform group I Did the Time and former campaign manager for Christopher Jackson, a left-leaning candidate who ran unsuccessfully for a seat on the Spokane Valley City Council in 2017.

The "new leadership" that Beaulac was referring to was Spokane Valley's new mayor, Ben Wick, and a new voting majority on the council — a result of last November's election — that some consider more moderate and pragmatic than the previous majority. And while the changing of the guard likely won't result in dramatic new policy changes, the new leadership is signaling that they aim to be more collaborative and inclusive than their predecessors.

"Some of the leadership in the past wasn't as collaborative and that's something we're trying to change," says Brandi Peetz, a Spokane Valley councilwoman and newly appointed deputy mayor. "I think this majority is going to work with other people."

Dean Grafos, a former Spokane Valley mayor, agrees: "I think it's going to go from the extreme to a common sense, middle-of-the road-type government."

Currently, the council is stacked four to three in favor of the "moderates." Wick, 37, was nominated to be mayor at a Jan. 7 council meeting and was unanimously approved, with the exception of Mayor Rod Higgins, who declined to vote. Similarly, most of the council approved Councilwoman Peetz, 33, as deputy mayor; Higgins and Woodard were the exceptions. Wick, the new mayor, was first elected to the City Council in 2011. He lost a re-election bid in 2015, only to go on to win another seat in 2017.

The 2019 election set the current power balance in motion: Peetz fended off a challenge from Michelle Rasmussen, a former assistant to the city manager. Similarly, Tim Hattenburg, who has run for elected office as a Democrat before, won his race. But it wasn't a total sweep. Arne Woodard, a longstanding hard conservative council member who made up the previous majority, won his re-election bid in last year's election.

Both Hattenburg and Peetz were endorsed by Spokane County Sheriff Ozzie Knezovich, while Rasmussen, Tucker and Woodard were all backed by Shea. (All of Shea's preferred candidates told the Inlander previously that they never sought his endorsement.) And in Spokane Valley politics, endorsements from both Shea and Knezovich are a decent measure of just how right-leaning a given candidate is.

The new majority is hesitant about giving itself political labels. Wick says that while the current council "probably got less conservative," he would still put his majority "on the conservative side of things."

But Woodard calls them "phony conservatives" who have "all gone far left now."

"They lied. They were sold as conservatives, but they are not," he says. "We have a progressive [council], not moderate. Everyone wants to say moderate."

Some critics argue the previous council majority, which was led by Higgins, peddled in controversial conservative ideas and had little tolerance for dissent.

"The past administration created an atmosphere of 'we don't want to hear from you unless you like everything we're saying,'" says Diana Wilhite, a former Spokane Valley mayor who has run for office as a Republican. "It made for a very uncomfortable atmosphere in City Council chambers and people didn't want to come."

For instance, Higgins abruptly removed Wick from his posts on the Spokane Regional Transportation Council Board and the council's Finance Committee. Wick says that he still doesn't "fully know what the cause was" for his removal.

Fast forward to this last year: In August, Higgins instituted a controversial policy for public comment at council meetings that revoked testimony entirely if anyone went over their three-minute time allotment. (The move came after a man went beyond his three minutes while asking the council to take a stand on Shea and his ideas.) The former mayor also vigorously opposed a racial equity proposal pushed by Councilwoman Linda Thompson over the summer. (Higgins did not respond to multiple requests for comment.)

Wick says that one of his priorities for the new year is revisiting the council's public comment policy.

"We, as elected officials in the city of Spokane Valley, represent the citizens. And we want to hear from them," he says.

Many point to Wick's recent committee appointments, in which every council member has at least two assignments, as evidence of another way that he is operating as a fair operator. Previously, only a handful of council members had a disproportionate number of committee and board positions.

Thompson says she thought the assignments were an effort to sideline the minority.

"It was very frustrating to watch. One person had seven committees and one person had none, or one that met once a year. I think that isn't utilizing the skills and talents we have," she says.

Beaulac points to the fact that Wick, who has served as a Republican precinct committee officer, met recently with the Valley Indivisible Progressives, a liberal group, as evidence that he is more inclusive than his predecessor, Higgins.

"He's very open, doesn't have an ax to grind, and he tries to answer all the questions with the knowledge that he does have," says Timothy Lape, founder of Valley Indivisible Progressives. "Rod has never shown up."

On policy, Wick says it's unlikely the new council will push any radical changes. He says he and the new majority intend to continue Spokane Valley's position of fiscal conservatism. That doesn't mean, however, that he's opposed to looking at new initiatives to address pressing issues, such as using a new program approved by the Legislature last year that allows cities and counties to access a portion of state sales tax revenue to help finance affordable housing. Additionally, he's interested in using surplus tax revenues that the previous majority stashed away to pay for road maintenance.

"We have less than 100 employees for the entire city. I don't foresee us running out to change that," he says. "I think we buy in very strongly to that philosophy of utilizing the private enterprise wherever possible and keeping the overhead of our city down low." ♦

The original print version of this article was headlined "New Crew"