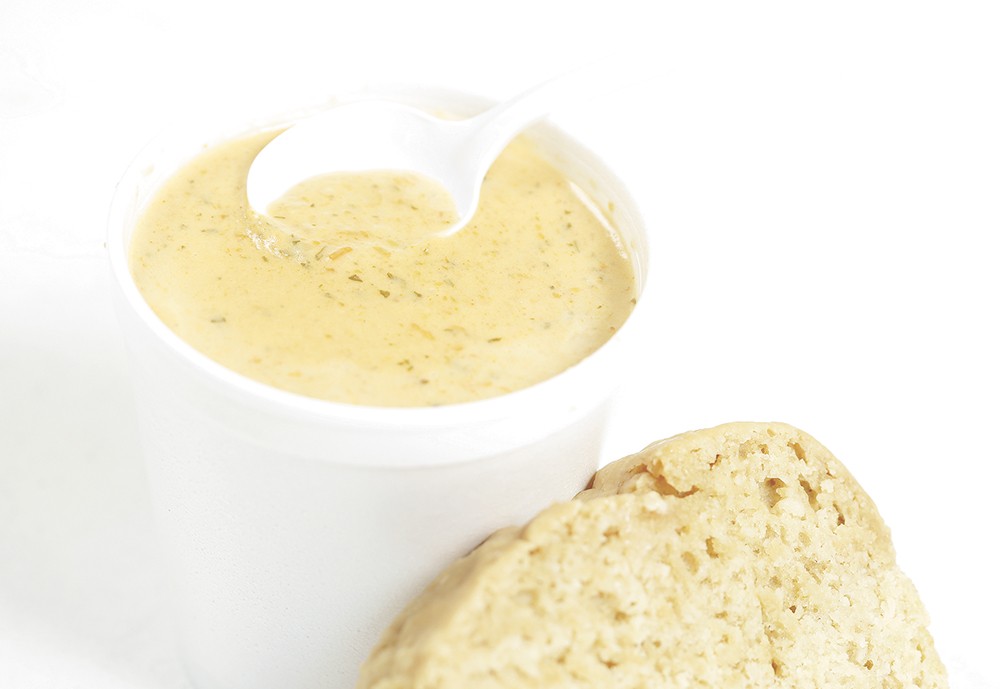 Spoons: they're so great, people literally collect them. OK, maybe the jury is still out on the logic behind that hobby. But we all have fond memories of fighting siblings for the rights to a mixing spoon covered in brownie batter, or of using a spoon to fling food across a cafeteria, or of eating cereal with one in front of the TV on Saturday mornings. So to celebrate the wonder of the spoon, here's a day's worth of local dishes you definitely won't want to waste in a food fight.

If you're looking to start your day out with something hearty, skip the cold cereal and head to CHAPS (4237 Cheney Spokane Rd.), where the baked oatmeal has quite the loyal following. Your friends may hassle you for choosing oatmeal over chicken fried steak or the meat lovers scramble (for the record, both are also delicious), but share a bite and watch the badgering cease. It's a creamy and slightly sweet custard-style oatmeal with a flawless, not-too-mushy texture — the kind every grandma ought to make. To top it all off, it's served with fresh blueberries and a small Mason jar of scalded cream. And could there possibly be a more charming spot to eat a bowl of good old-fashioned oats than at the most cottage-esque restaurant in town?

For lunch, pop into SOULFUL SOUPS & SPIRITS (117 N. Howard). Their menu rotates daily, but they always have their beer cheese soup — which is the only soup you'll ever need anyway — on tap. This marriage of two of the world's greatest things is thick and creamy but not too heavy, and the flavor is a perfect balance of sharp cheddar and malty goodness. If you're looking to hit maximum beer and cheese consumption levels, it's offered with a scoop of shredded cheddar (because why not add cheese to your bowl of cheese?), and you can add a slice of their famous beer bread for an extra buck. If you're still hesitant, know this: both the soup and bread are made with Big Sky Brewing's Moose Drool brown ale, so you know it has to be good.

If at the end of the day you're still jonesing for spoon foods, grab a bowl of the killer 74th St. Gumbo at THE ELK PUBLIC HOUSE (1931 W. Pacific). Borrowed from Seattle's popular 74th Street Ale House, it's become a must-have dish for plenty of people when dining at The Elk. It's a full-bodied, perfectly spiced blend of chicken, sausage, bay shrimp and vegetables in a spicy sauce, served fittingly over Cajun dirty rice. This ain't shrimp scampi; prepare for some serious heat. Consume this gumbo with a spoon in one hand and a cold beer in the other. ♦

Good to the last lick

South Perry's Wellness Tree is one-stop shopping for health, with a naturopathic clinic and a juice bar all wrapped into one. The menu offers all kinds of superfood-laden smoothies and juices; it's also a perfect place to dive into the acai bowl craze. They offer four flavors: peanut butter, berry, green and tropical, with toppings including shaved coconut, goji berries, bee pollen, bananas and granola.

SOUL: A SOUP AND COFFEE HOUSE

Panhandle is the kind of place that goes all out with flavor experimentation, but upon further investigation (in the form of samples), all of their crazy combinations just taste right. Swing by the Sandpoint shop to grab a scoop of one of their funky, fresh ice cream flavors like tangy buttermilk huckleberry, lemon mascarpone poppy seed, or sweet basil and pine nut praline.

For two years, Wisconsinburger has given Spokane's upper Midwest transplants a reason to rejoice, with its genuine cheese curds fried in Miller High Life batter and hearty burgers topped with Wisconsin cheddar. So what's it doing the spoon category, you might ask? Well, this retro-bowling-alley-inspired South Hill joint is Spokane's only source for the thick, creamy, glorious creation that is frozen custard, so save room for dessert. ♦

A brief history of... THE SPOON

Utensils similar to spoons were likely some of the first eating utensils ever put to use by humans. Prehistoric civilizations are thought to have utilized shells and wood chips in ways similar to how we now use spoons. In fact, the word spoon has origins in the Anglo-Saxon "spon," meaning "a chip or splinter of wood." Romans began using spoons for consuming some soft food items such as soups as early as the first century. Soon, the utensils saw use by the Britons due to the Roman occupation of the British Isles between the first and fifth centuries. As civilization progressed to the middle ages, the wealthy often possessed elegant spoons made of solid gold and silver.